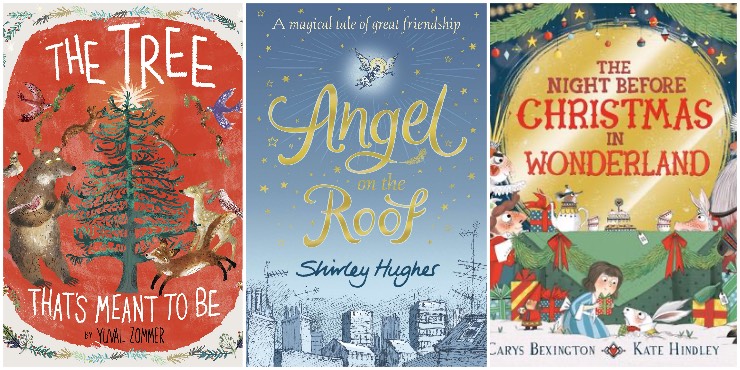 Looking for something new to read this Christmas? Check out 2019’s best Christmas books in the lead-up to the big day.

The Tree That’s Meant to Be, by Yuval Zommer

“A little fir tree is too small and too imperfect to be chosen at Christmas time. But being left alone in the forest brings more rewards than the tree could ever have hoped for. This is a charming and classic-feeling Christmas picture book with a heartfelt message about love and embracing what makes us different. Families will love sharing the story and talking about kindness, generosity, and the true meaning of Christmas.”

“It’s Christmas Eve and Oscar the Unicorn is hungry. He’s eaten the Christmas tree, the stockings and is about to make a start on the presents. But at least he hasn’t eaten the magic reindeer food that allows the reindeer to fly - has he?! Oh. He has. All of it. How is Santa going to deliver presents to the rest of fairyland with his trusty reindeer unable to fly? Luckily, Princess Oola has an idea - Oscar will make the best reindicorn EVER!”

“This is a brilliantly funny rhyming story about a rogue Christmas tree who doesn’t want to stand in a pot covered in tinsel; but the decorations are determined to get the tree to fulfil its Christmas destiny!”

“In this lift-the-flap story, set on a silent, snowy Christmas Eve, the very hungry caterpillar is hoping for a very special visitor. Lift-the-flap on every page to discover who’s at home. Could it be Father Christmas?”

Pip and Posy: The Christmas Tree, by Axel Scheffler

“It’s Christmas time and Pip and Posy are busy decorating the tree with candy sticks, and biscuits, and a beautiful sugar star. But the strange thing is that, every time Posy goes out of the room, when she returns, there’s one less decoration on the tree. Eventually, there are NO decorations left AT ALL - oh, dear!

“All young readers will enjoy the moment when Posy finds Pip lying on the sofa, feeling sick, but will they guess how she decides to tackle Pip?”

“It’s Christmas Eve, and Twinkle is too excited to sleep - but someone else is having problems of his own! Can Twinkle help save Christmas and still get to bed on time?”

There’s an Elf in Your Book, by Tom Fletcher & Greg Abbott

“In the run up to Christmas, children and adults alike will love interacting with the loveable, mischievous little elf as he takes them through the all-important Nice List Test, to discover if they’ve earned their Christmas presents. But be careful not to let him catch you out! This cheeky elf has a few naughty tricks up his sleeve.”

“As the sun set on the shortest day of the year, early people would gather to prepare for the long night ahead. They built fires and lit candles. They played music, bringing their own light to the darkness, while wondering if the sun would ever rise again.

“Written for a theatrical production that has become a ritual in itself, Susan Cooper’s poem The Shortest Day captures the magic behind the returning of the light, the yearning for traditions that connect us with generations that have gone before - and the hope for peace that we carry into the future.”

“When Peppa tells Daddy Pig that it’s Christmas Jumper Day at playgroup tomorrow, they all rush to the loft to find the Christmas box, but their jumpers from last year don’t fit anymore. Will Daddy Pig be able to save the day?”

“From Africa to Australia to Asia and back again, Sonny the meerkat is on the hunt for the perfect Christmas in this flap-filled festive picture book.”

Stephen, the Sprout of Kindness, by Richard Dungworth & Samantha Meredith

“Stephen is a sprout. He’s not just any sprout though, he’s a sprout of kindness! Stephen helps out his friends when they lose things, if they can’t decide who should go next on the swings, and he even helps sort out a little sibling rivalry. At the end there are some suggestions of ways that the readers can carry on what Stephen starts, and spread a little more kindness in the world.

“With rhyming text, bright illustrations and a funny refrain, this book all about ways to be kind will inspire and encourage children everywhere.”

Angel on the Roof, by Shirley Hughes

“In this heart-warming Christmas story by celebrated author Shirley Hughes, a young boy called Lewis Brown is looking out of a window and wishing that someone might notice him. Then he spots a single golden feather floating down from the heavens and discovers an angel on the roof.

“And so begins a great friendship, as the angel takes Lewis under his wing on an adventure that will change everything, and allow Lewis, his family and his friends to start to see the world around them for the better.”

The Twelve Unicorns of Christmas, by Timonthy Knapman & Ada Grey

“One little girl is counting down to Christmas with her unicorn friend. There’s lots to do before Christmas day, but her unicorn is a bit mischievous. He munches all the mince pies, scribbles on the Christmas cards, makes a lot of mess and when the carol singers arrive, cover your ears, because unicorns REALLY can’t sing! But as the big day grows closer and closer, will the two friends get their Christmas wish?”

“Dasher is an adventurous young reindeer with a wish in her heart. She spends her days with her family under the hot sun in a travelling circus, but she longs for a different life - one where there is snow beneath her hooves and the North Star above her head. And one day, when the opportunity arises, Dasher seizes her destiny and takes off in pursuit of the life she wants to live.

“It’s not long before she meets a nice man in a red suit with a horse-drawn sleigh, a man named Santa. And soon, with the help of a powerful Christmas wish, nothing will be the same.”

The Christmasaurus and the Winter Witch, by Tom Fletcher & Shane Devries

“‘She is the best-kept Christmas secret of all,’ whispered Santa Claus. ‘Which is surprising, because Christmas itself would not exist without her. She is older than time itself, yet still as young as tomorrow. She is known only as the Winter Witch.’

“One year has passed since William Trundle’s incredible adventure with the most extraordinary dinosaur: the Christmasaurus. Now, William is swept back to the magical North Pole, where he meets the mysterious, icy Winter Witch - whose power to control time allows Santa Claus to make the long journey all around the world every Christmas Eve. And when they learn that the fate of Christmas itself hangs in the balance, William and the Christmasaurus must work with the Winter Witch to protect it.”

“A Christmas Carol is the perfect introduction for young children to this popular seasonal tale. Push, pull, and turn mechanisms to bring Ebenezer Scrooge to life - and help him finally discover the joy of Christmas!”

The First Christmas Jumper (and the sheep who changed everything), by Ryan Tubridy & Chris Judge

“There are two things you need to know about Hillary the sheep. One - Unlike her typical white or brown friends, Hillary’s wool is all the colours of the rainbow. Two - she loves Christmas. She loves everything about it, especially Santa.

“When news gets out that Mr Claus himself is travelling across all of Ireland, looking for the perfect sheep’s wool to make a brand new jumper, Hillary’s head begins to spin. Could her wool-dest dreams come true?

“With back-chatting sheep, a jelly baby-obsessed farmer and a choir of Elvish Presley singing elves, this is a truly wild, laugh out loud adventure all about the creation of the very FIRST Christmas jumper.”

“It’s Christmas Eve at Apple Tree Farm! Peep under the flaps to find out what Poppy and Sam are doing to get ready for Christmas Day. Poppy can’t find Ginger, her kitten, but maybe you can see where she’s hiding!”

Christmas in 100 Words, by Sophie Beer

“Introduce your little ones to words of the festive season with cute characters, bright colours and playful scenes. From decorating the tree to Christmas dinner and candy cane to sleigh, this board book introduces a range of different holiday scenes and objects.”

“A lonely tree stands on the cold, frosted hillside gazing at the other trees sparkling in the village below. How it longs to be with them! Then suddenly out reaches a warm friendly hand, and with a wobble and a shake, a very jolly fellow takes the tree on a journey to a new place - where the tree will feel that it belongs once more, surrounded by old friends and new.”

“One day in autumn, in the days when all the trains were driven by steam, a railway guard found something abandoned on a train. Mr Ginger Leghorn is used to collecting up umbrellas and other lost property but he’s never found an abandoned puppy on his train before. He has no intention of keeping it but his five children - Alfie, Arthur, Beryl, Sissy, and Albert - have other ideas and Jim is soon a much-loved, but often disruptive, member of the family.

“Whether it’s his feud with the cat, getting stuck in rabbit-holes, accidentally going to sea, accompanying the children to school or carol singing at Christmas, Jim has a knack of making himself the centre of attention.”

“‘Jingle bells, jingle bells, smelly poo and bum! You can wait for Christmas but it’s never going to come!’’

“When a miniature reindeer named Percy falls down the chimney of the Trubshaws’ holiday cottage, the last thing they expect is to be whisked away to the distant planet of Yule-1 - the REAL home of Father Christmas, the elves, and his intrepid reindeer delivery teams. And what an amazing place it is - nobody minds being stuck there until the computer system has been mended.

“But the festive season is in danger! One rogue reindeer has teamed up with the evil Krampus to sabotage everything. Unless Percy and his new friends can track them down, there will be no Christmas this year - or EVER AGAIN!”

The Boy Who Made the World Disappear, by Ben Miller & Daniela Jaglenka Terrazzini

“Harrison tries his best to be good. He doesn’t steal, he always shares with his sister and he never cheats at board games, but Harrison also has a BIG flaw - he can’t control his temper! So when he’s given a black hole instead of a balloon at a party, Harrison jumps at the chance to get rid of everything that makes him cross. But when it’s not just things he hates that are disappearing into the black hole but things he loves, too, Harrison starts to realise that sometimes you should be careful what you wish for.”

The Puffin Book of Christmas Stories, by Wendy Cooling (ed.)

“A delightful collection of stories by some of the finest writers for children. The Puffin Book of Christmas Stories is essential Christmas-time reading including classic and contemporary stories, from traditional to real life, humour and most importantly, the magic of Christmas. Writers range from Charles Dickens to Gillian Cross, Trish Cooke, Malorie Blackman and Jacqueline Wilson.”

The Night Before Christmas in Wonderland, by Carys Bexington & Kate Hindley

“The Queen of Hearts hates Christmas – she’s banned tinsel, mince pies and even good cheer –because when she was a little Princess the White Rabbit was late delivering her letter to Father Christmas and she didn’t receive a present. But one snowy Christmas Eve, Santa finally receives her letter and races to deliver her gift! Will Santa and his reindeer be able to put the Merry back into Christmas in Wonderland?”