Kate shares how dispersing teenage books throughout the library has made them more popular among teenagers and adults.

Here at Haverhill library we have always had a rather static teenage library collection. We’ve had a dedicated teenage section “T-Zone”, but we rarely see any teenagers in the section browsing the stock.

We know that some of the stock goes out on loan as it reappears on our returns trolleys to be shelved, but we rarely see our borrowers and, in reality, a small, niche collection is borrowed. Our teenager borrowers are known as ninja teens because we rarely see them but we know they’ve been there!

It’s become something of a personal crusade to get our teenage books issuing more. There are some great titles but they just don’t seem to be read (except by me and a couple of my colleagues) and we end up weeding loads of books which never seem to have been loaned. I’m not averse to a good stock weed but it seemed such a pity.

When our stock unit’s Jo Dixon visited to weed our children’s stock, we had a chat about our teenage library and how we could get more stock issuing. She suggested the radical approach of breaking up the teenage library and moving the stock around. So we did.

I appreciate that in a relatively large library we’ve got the luxury of a bit more space to play around with than in a smaller library, but it’s worth considering. It has also played to our advantage as we recently changed our layout and used the teenage library space for the relocation of some of our IT equipment and our newspaper and reading area.

We’ve moved our Younger Teen stock on to its own unit to the edge of our children’s library and our Older Teen stock is at the end of our adult fiction.

They’re still near neighbours so you’ve got that natural progression from Younger Teen to Older Teen, and you can move between the two more easily. Our teenage non-fiction, which was always half a shelf sitting awkwardly at the end of the teenage library, has been carefully moved (with much deliberation on our part) in to either the adult non-fiction section or the children’s non-fiction. 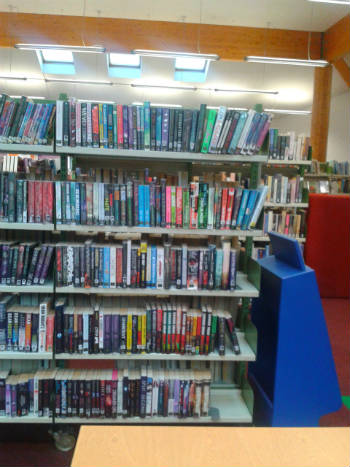 Teen fiction integrated into the rest of the stock

It was a slow start and we didn’t really notice a change at first, but slowly and surely readers are borrowing more teenage books. There are more gaps on the shelves in both the Younger and Older Teen sections and borrowers are asking us where we’ve moved the stock. We know it’s being used.

I think it’s been great for the adults who like to dip into the Older Teen stock; they feel less conspicuous browsing at the end of the adult fiction, and it’s been a boon for those older children who are moving on from the junior fiction but find the step into the teenage library a step too far!