The Metaphysical Poets by Jim Hunter was recently returned to Lowestoft Library, having been overdue since September 1967.

The book was sent back in the post with a note from the borrower, saying they were “extremely embarrassed” and including £100 to cover the overdue charges. They had borrowed it while staying with their parents in the town and came across it again while moving house. It is still in good condition and will now be returned to the shelves for anyone to borrow.

The charge at the time would have been three old pennies a week, meaning the borrower would have owed about £33 and 10 shillings. The fine for overdue books is now 15p per day, but the charge is capped at £7.35 for an adult book. Lowestoft Library will use the borrower’s £100 contribution to support its services and activities. 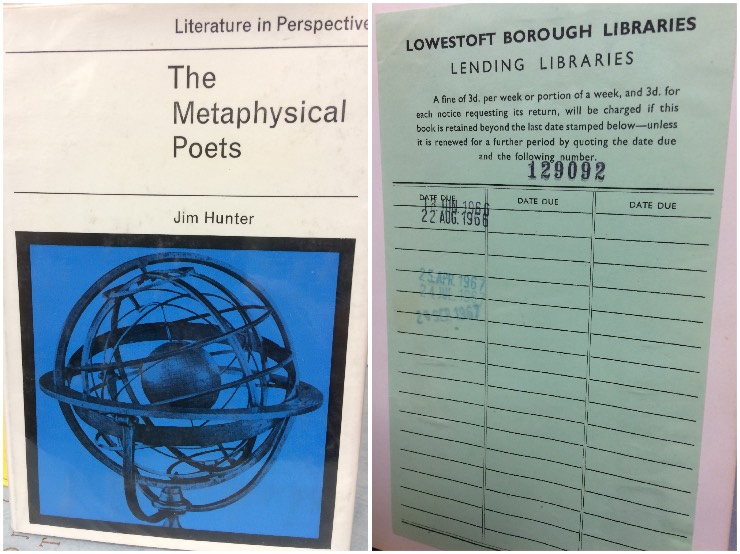 Lowestoft Library manager Jo Wilde said: “I was amazed when we received the book. It was a very generous gesture and a lovely surprise. Most people wouldn’t have even bothered to return the book after all that time. I thought people would like to hear about it, so I posted the photos on Facebook and many people clearly love the story!”

Suffolk Libraries marketing and communications manager James Powell added: “This is a lovely story, showing the best of human nature. It’s easy to forget or mislay things, but taking the extra effort to return the book – and in good condition – after all this time shows this person wanted to put things right. Hopefully next time someone borrows this book they’ll bring it back a bit sooner!

“However, we’d always rather keep customers, so if someone is embarrassed about returning a very overdue book we’d encourage them to talk to us.”