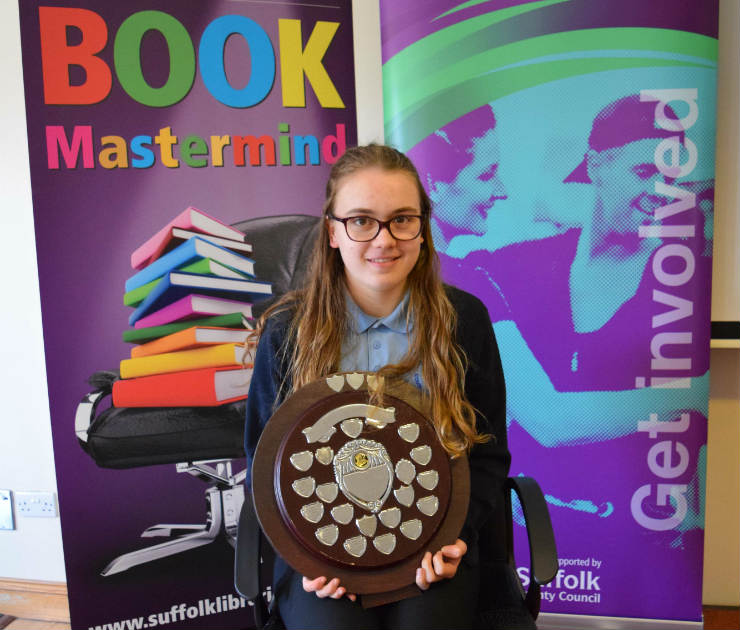 Katy triumphed over eight other students from across the county at the 23rd annual competition, which is designed to test how well secondary school students know their favourite books, as well as their general knowledge.

Entrants from schools across the county competed in area finals to qualify for the grand final, which was held in Stratford St Andrew last week. Pupils from each school had to answer questions on their chosen book, then faced a series of general knowledge questions including a picture round. Fellow students and teachers also came along to cheer on the finalists.

Following the competition, everyone who came along enjoyed two inspiring talks by children’s authors William Hussey and Francesca Armour-Chelu.

William Hussey is the author of seven books and his latest, Jekyll’s Mirror, published in January 2015, was nominated for the 2016 CILIP Carnegie Medal. His other books include the acclaimed Witchfinder trilogy and the supernatural thriller Haunted.

Local author Francesca Armour-Chelu has had two books published - Fenn Halfin and the Fearzero, which was shortlisted for the 2016 East Anglian Book Awards, and the follow-up Fenn Halflin and the Seaborn. She also works at Halesworth Library.

Krystal Vittles, Suffolk Libraries development Manager and children and young people’s lead, said: “Book Mastermind is a celebration of books and reading and once again all the students and schools who took part have done themselves proud. It was great to see so many young people taking the competition so seriously and with such enthusiasm.

“I’d like to thank everyone who helped to support and run the event including the schools, students and our two inspiring guest authors.”