The Aldeburgh Library Foundation has won ‘Learning Project of the Year’ at the Suffolk Adult Learners Awards 2014!

The 2014 Suffolk Adult Learner Awards ceremony took place at University Campus Suffolk on 19 June and was a fantastic event celebrating the outstanding achievements of learners, tutors, projects and volunteers across Suffolk.

The library foundation won the award for its extensive programme of adult learning courses for local people which range from absolute beginners courses in computing, iPads, Italian and Spanish, to improvers’ development courses; from the works of Benjamin Britten (who played a key role in the creation of Aldeburgh Library itself), the movies, history of opera, and weekly politics and current affairs, to painting, garden design and creative writing. 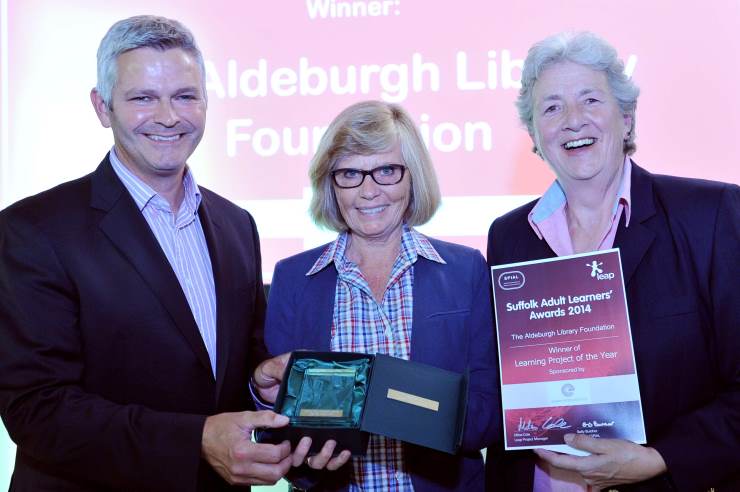 Simon Mead from the Eastern Enterprise Hub presents Anne Parsons (middle) and Lynne Walker (right) from the Aldeburgh Foundation with their award.

Aldeburgh Library Foundation was one of the first community groups to start working with Suffolk Libraries to support the county’s libraries. The group has a life-long learning policy and a pilot of ten courses in autumn 2012 proved so successful that the library now provides six-week adult learning courses every weekday afternoon and some evenings, from September to May.

In 2012/13 there were 26 courses for 170 students and in 2013/14 this grew to 37 courses attracting 325 students. The whole of the adult learning programme is planned, promoted and managed by volunteers.

This award is deserved recognition for everyone involved in the project which has also led to increased use of the library. Liz Grugeon who has taken part in the library’s courses was also a runner-up for the 65+ Learner of the Year at the awards.

The Suffolk Adult Learner Awards are organised by Leap and the Suffolk Partnership for Informal Adult Learning (SPIAL) and the event was compered by BBC Radio Suffolk presenter and University Campus Suffolk (UCS) Honorary Graduate, Mark Murphy who also interviewed Lynne Walker from the Aldeburgh Library Foundation about the group’s success for BBC Radio Suffolk.  The Learning Project of the Year  award was sponsored by the Eastern Enterprise Hub.

For more information about the awards visit the LEAP website . You can also see a list of courses, events and activities at Aldeburgh Library.