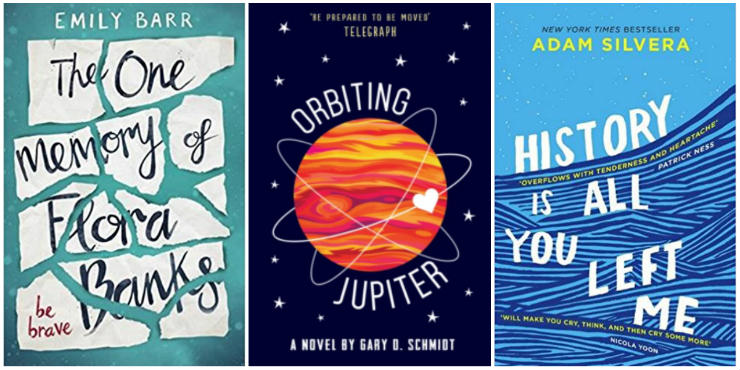 The One Memory of Flora Banks, by Emily Barr

“Flora has amnesia. She can’t remember anything day-to-day: the joke her friend made, the instructions her parents gave her, how old she is. Then she kisses someone she shouldn’t, and the next day she remembers it. It’s the first time she’s remembered anything since she was ten. But the boy is gone. She thinks he’s moved to the Arctic. Will following him be the key to unlocking her memory? Who can she trust?”

“Harper has tried to forget the past and fit in at expensive boarding school Duncraggan Academy. Her new group of friends are tight; the kind of girls who Harper knows have her back. But Harper can’t escape the guilt of her twin sister’s Jenna’s death, and her own part in it - and she knows no-one else will ever really understand.

“But new girl Kirsty seems to get Harper in ways she never expected. She has lost a sister too. Harper finally feels secure. She finally feels loved. As if she can grow beyond the person she was when Jenna died. Then Kirsty’s behaviour becomes more erratic. Why is her life a perfect mirror of Harper’s? And why is she so obsessed with Harper’s lost sister? Soon, Harper’s closeness with Kirsty begins to threaten her other relationships, and her own sense of identity.”

Letters to the Lost, by Brigid Kemmerer

“Juliet Young always writes letters to her mother. Even after her mother’s death, she leaves letters at her grave. It’s the only way Juliet can cope. Declan Murphy isn’t the sort of guy you mess with. But in the midst of his court-ordered community service at the local cemetery, he’s also running from the demons of his past. When Declan reads a haunting letter left beside a grave, he can’t resist writing back. Soon, he’s opening up to a perfect stranger, and their connection is immediate.

“But neither Declan nor Juliet knows that they’re not actually strangers. When life at school interferes with their secret life of letters, sparks will fly as Juliet and Declan discover truths that might tear them apart.”

The Start of Me and You, by Emery Lord

“Can you plan happiness? It’s been a year since Paige’s first boyfriend died in a swimming accident and it’s time she rejoined the real world. So she makes a plan: date a boy (long-standing crush Ryan Chase seems like the perfect choice); attend parties (with best friends by your side: doable); join a club (simple enough, right?); travel (might as well dream big); swim (terrifying. Impossible).

“But when she meets Ryan’s sweet but so nerdy cousin, Max, he opens up her world and Paige’s plans start to change. Is it too late for a second chance at life?”

“Viv’s mum was a tough-as-nails, punk rock Riot Grrrl in the ’90s, and now Viv takes a page from her mother’s past and creates Moxie, a feminist zine that she distributes anonymously to her classmates. She’s just blowing off steam, but other girls respond and spread the Moxie message. As Viv forges friendships with other young women across the divides of cliques and popularity rankings, she realises that what she has started is nothing short of a girl revolution.”

“A heartbreaking story, narrated by 12-year-old Jack, whose family is caring for 14-year-old Joseph. Joseph is misunderstood. He was incarcerated for trying to kill a teacher. Or so the rumours say. But Jack and his family see something others in town don’t want to. What’s more, Joseph has a daughter he’s never seen. The two boys go on a journey through the bitter Maine winter to help Joseph find his baby - no matter the cost.”

History is All You Left Me, by Adam Silvera

“OCD-afflicted seventeen-year-old, Griffin, has just lost his first love - his best friend, ex-boyfriend and the boy he believed to be his ultimate life partner - in a drowning accident.

“In a desperate attempt to hold onto every last piece of the past, a broken Griffin forges a friendship with Theo’s new college boyfriend, Jackson. And Griffin will stop at nothing to learn every detail of Theo’s new college life, and ultimate death. But as the grieving pair grows closer, readers will question Griffin’s own version of the truth - both in terms of what he’s willing to hide, and what true love ultimately means.”