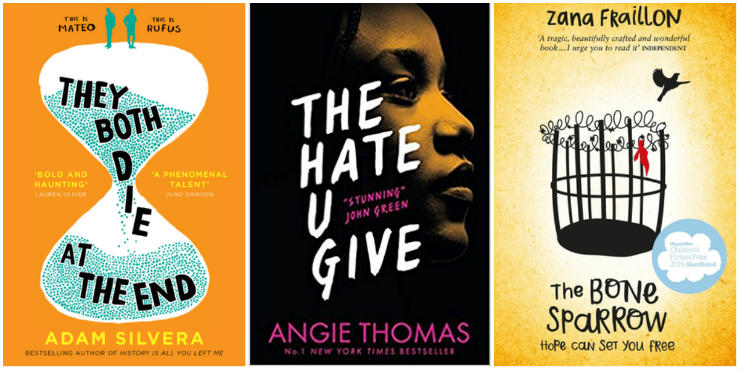 2017 has seen some amazing additions to the vibrant and exciting Young Adult genre, which can be enjoyed by both the young and the young-at-heart. Whether you’re looking for a story in verse, a fantasy epic, gritty realism, a novel in which the political is personal, or simply something our reviewers loved, to borrow or buy as a gift, we’ve got it covered.

If you haven’t tried reading a verse novel yet, you will be amazed at how readable and powerful they can be. Fewer words, carefully chosen and a strong story pack a real punch.

Sarah Crossan is a favourite among our staff and customers, and volunteer Emily recently gave Moonrise a glowing review. If you like it, you’ll also like We Come Apart, co-authored with Brian Conaghan, and 2015 book One, about a pair of conjoined twins growing together and apart.

Other verse novels we love are Alexander Kwame’s Booked (2016) and The Crossover (2016). We’re also looking forward to Long Way Down, by Jason Reynolds in 2018.

We couldn’t talk about the YA books of the year without mentioning this - it’s also on our more general Best of 2017 list. La Belle Sauvage is set ten years before Northern Lights and features Lyra Belacqua as a baby.

Already zoomed through it? Try the new edition of The Wind Singer, by William Nicholson or Garth Nix’s latest Young Adult offering, Goldenhand.

Patrice Lawrence is a YA author whose star is very much in the ascent. Raised in an Italian-Trinidadian family in mid-Sussex, she now lives in East London and both her novels are based in her home borough of Hackney. In Indigo Donut:

“Bailey is 17, mixed race, lives with his mum and dad in Hackney and spends all his time playing guitar or tending to his luscious ginger afro. Indigo is 17 and new to London, having grown up in the care system after being found by her mum’s dead body as a toddler. All Indigo wants is to know who she really is. When Bailey and Indigo meet at sixth form, sparks fly. But when Bailey becomes the target of a homeless man who seems to know more about Indigo than is normal, Bailey is forced to make a choice he should never have to make.”

Although Lawrence’s other novel, Orangeboy came out in 2016, it gained a lot of well-deserved attention this year as it won the Waterstones Children’s Book Prize and The Bookseller YA book prize.

Alex Wheatle is another YA author who really made a name for himself in 2017. This year’s novel was Straight Outta Crongton:

“Round these ends, it’s hard to hold on to your dreams Life’s a constant hustle for Mo. Her mum’s boyfriend Lloyd is just another man who likes to beat down women; the South Crong streets are fraught with hazards and nasty G’s; and when it comes to matters of the heart, she’s still hung up on Sam. No wonder she’s vexed so much of the time. Thank god she has her sister, Elaine and Naomi, on her side: if one of them falls then they all fall. But when badness goes down and a life is left hanging in the balance, Mo has to face her hot urge for revenge and she might end up losing more than she wins.”

Like Lawrence, Wheatle’s 2016 book, Crongton Knights has been popular this year after winning the Guardian children’s fiction prize in November 2016.

The Hate U Give has earned rave reviews from John Green and Alex Wheatle, as well as volunteer Emily, who nominated it for this list and reviewed it for us.

The personal is political

Things a Bright Girl Can Do, by Sally Nichols

“Evelyn is 17, and though she is rich and clever, she may never be allowed to follow her older brother to university. Enraged that she is expected to marry her childhood sweetheart rather than be educated, she joins the suffragettes, and vows to pay the ultimate price for women’s freedom.

“May is 15, and already sworn to the cause, though she and her fellow suffragists refuse violence. When she meets Nell, a girl who’s grown up in hardship, she sees a kindred spirit. Together and in love, the two girls start to dream of a world where all kinds of women have their place.

Nominated by YA reviewer and Newmarket Library manager Kate, Things a Bright Girl Can Do has been described by LoveReading4Kids as ‘a riveting character-driven read, and an outstandingly rich account of British social history between 1914 and 1917.’

“Fifteen-year-old Alena never really knew her political activist mother, who died when she was a baby. She has grown up with her older half-brother Danny and his boyfriend Nick in the east end of London. Now the area is threatened by a bomber who has been leaving explosive devices in supermarkets. It is only a matter of time before a bomb goes off.

“Against this increasingly fearful backdrop, Alena seeks to discover more about her past, while Danny takes a job working for a controversial politician. As her family life implodes, and the threat to Londoners mounts, Alena starts getting into trouble. Then she does something truly rebellious.”

The Bone Sparrow, by Zana Fraillon

“Subhi is a refugee. Born in a detention centre, all he knows of the world is that he’s at least 19 fence diamonds high, that the nice jackets never stay long, and at night the sea finds its way to his tent, bringing with it unusual treasures. Bringing him Jimmie.

“Jimmie lives on the Outside. Carrying a notebook that she’s unable to read and wearing a sparrow made out of bone around her neck - both talismans of her family’s past and the mother she’s lost - she strikes up an unlikely friendship with Subhi across the fence. As he reads aloud the tale of how Jimmie’s family came to be, both children discover the importance of their own stories in writing their futures.”

The best of the rest

Here I Stand: stories that stand for freedom, edited by Amnesty International UK

Some of our favourite writers including Neil Gaiman, Sarah Crossan, Frances Hardinge and Matt Haig contributed to this collection of short stories for Amnesty International:

“Their stories and poems are poignant, challenging, heartbreaking, angry and haunting. They cover important issues likely to resonate with teenagers today, such as bullying, race hatred, child sex abuse, freedom of speech, identity and gang honour. All of them uphold the importance of speaking up against injustice and standing up for others.”

This title was chosen by YA reviewer Emma. Read Emma’s review of Here I Stand →

Volunteer reviewer Emily has nominated Adam Silvera for this list. His books tackle LGBT and mental health issues with bravery and grace and he has become a household name among Young Adult readers over the last couple of years. In History is All You Left Me:

“OCD-afflicted seventeen-year-old, Griffin, has just lost his first love - his best friend, ex-boyfriend and the boy he believed to be his ultimate life partner - in a drowning accident. In a desperate attempt to hold onto every last piece of the past, a broken Griffin forges a friendship with Theo’s new college boyfriend, Jackson. And Griffin will stop at nothing to learn every detail of Theo’s new college life, and ultimate death.

“But as the grieving pair grows closer, readers will question Griffin’s own version of the truth - both in terms of what he’s willing to hide, and what true love ultimately means.”

In They Both Die at the End:

“When Mateo receives the dreaded call from Death-Cast, informing him that today will be his last, he doesn’t know where to begin. Quiet and shy, Mateo is devastated at the thought of leaving behind his hospitalised father, and his best friend and her baby girl. But he knows that he has to make the most of this day, it’s his last chance to get out there and make an impression.

“Rufus is busy beating up his ex-girlfriend’s new boyfriend when he gets the call. Having lost his entire family, Rufus is no stranger to Death-Cast. Not that it makes it any easier. With bridges to mend, the police searching for him and the angry new boyfriend on his tail, it’s time to run.

“Isolated and scared, the boys reach out to each other, and what follows is a day of living life to the full.”

Read Emily’s review of They Both Die at the End →

Borrow They Both Die at the End as an eBook →

Borrow They Both Die at the End as an eAudiobook →