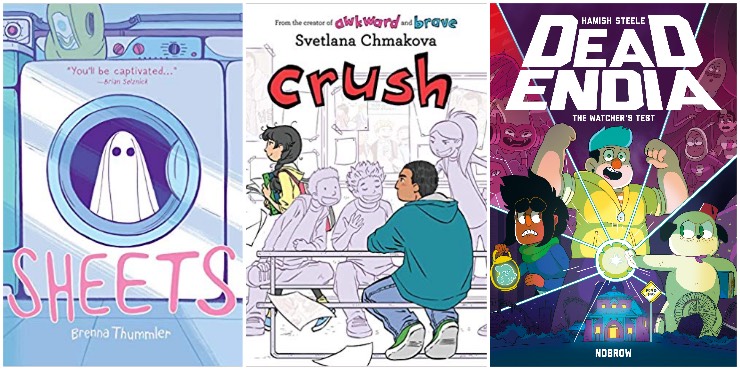 “Friendship to the max! Jo, April, Mal, Molly and Ripley are five best pals determined to have an awesome summer together… and they’re not gonna let any insane quest or an array of supernatural critters get in their way! It’s Buffy the Vampire Slayer meets Gravity Falls as five butt-kicking, rad teenage girls wail on monsters and solve a mystery with that has the whole world at stake.”

“C’mon and grab your friends for this amazing collection of short stories from cartoonists all over the world. Featuring the amazing talent of Katie Cook (My Little Pony), Art Baltazar (Tiny Titans), Tony Millionaire (Maakies and the Sock Monkey), Box Brown (Andre the Giant) and many, many more.”

“Raina wakes up one night with a terrible upset stomach. Her mom has one, too, so it’s probably just a bug. Raina eventually returns to school, where she’s dealing with the usual highs and lows: friends, not-friends, and classmates who think the school year is just one long gross-out session. It soon becomes clear that Raina’s tummy trouble isn’t going away - and it coincides with her worries about food, school, and changing friendships. What’s going on?”

“Catrina and her family are moving to the coast of Northern California because her little sister, Maya, is sick. Cat isn’t happy about leaving her friends for Bahía de la Luna, but Maya has cystic fibrosis and will benefit from the cool, salty air that blows in from the sea. As the girls explore their new home, a neighbour lets them in on a secret: There are ghosts in Bahía de la Luna. Maya is determined to meet one, but Cat wants nothing to do with them. As the time of year when ghosts reunite with their loved ones approaches, Cat must figure out how to put aside her fears for her sister’s sake - and her own.

“Think you know everything about Peter Parker? Think again! Expect action, adventure and hilarity in equal measure as we head back to high school to explore Pete’s early days! Modern talent combines with the classic Marvel flavour to present the web-slinging wonder’s younger years in truly amazing, spectacular, sensational style!”

First in the Deadendia series, which is getting a lot of attention at the moment. Followed by The Broken Halo.

“Barney and Norma are just trying to get by and keep their jobs, but working at Dead End also means battling demonic forces, vengeful ghosts, time travelling wizards and scariest of all - their love lives.”

“Charlie and Nick are at the same school, but they’ve never met - until one day when they’re made to sit together. They quickly become friends, and soon Charlie is falling hard for Nick, even though he doesn’t think he has a chance. But love works in surprising ways, and Nick is more interested in Charlie than either of them realised.”

A major book crush of ours, perfect for fans of Stranger Things. The series starts here.

“In the early hours after Halloween of 1988, four 12-year-old newspaper delivery girls uncover the most important story of all time. Suburban drama and otherworldly mysteries collide in this smash-hit series about nostalgia, first jobs, and the last days of childhood.”

Latest in the brilliant Awkward series.

“Jorge seems to have it all together. He’s big enough that nobody really messes with him, but he’s also a genuinely sweet guy with a solid, reliable group of friends. The only time he ever really feels off his game is when he crosses paths with a certain girl. But when the group dynamic among the boys starts to shift, will Jorge be able to balance what his friends expect of him versus what he actually wants?”

Ms Marvel is a Pakistani-American superhero with a one-of-a-kind embiggening power!

“Kamala Khan is an ordinary girl from Jersey City - until she is suddenly empowered with extraordinary gifts. But who truly is the all-new Ms. Marvel? Teenager? Muslim? Inhuman? Find out as she takes the Marvel Universe by storm!

“As Kamala discovers the dangers of her newfound powers, she unlocks a secret behind them as well. Is Kamala ready to wield these immense new gifts? Or will the weight of the legacy before her be too much to handle?”

“Susan, Esther, and Daisy started at university three weeks ago and became fast friends. Now, away from home for the first time, all three want to reinvent themselves. But in the face of handwringing boys, “personal experimentation,” influenza, mystery mould, nuchauvinism, and the wilful, unwanted intrusion of “academia,” they may be lucky just to make it to spring alive.”

Marvel’s Unbeatable Squirrel Girl is a funny, very likeable character with the proportional speed and strength of a squirrel. She has to balance the demands of starting college with saving the world.

Second book based on the McElroy family’s Adventure Zone D&D podcast and sequel to Here Be Gerblins.

“This installment has a little of everything: a genius child detective, an axe-wielding professional wrestler, a surly wizard, cursed magical artifacts, and a pair of meat monsters.”

“Nothing about Saitama passes the eyeball test when it comes to superheroes, from his lifeless expression to his bald head to his unimpressive physique. However, this average-looking guy has a not-so-average problem - he just can’t seem to find an opponent strong enough to take on! Every time a promising villain appears, he beats the snot out of them with just one punch! Can Saitama finally find an opponent who can go toe-to-toe with him and give his life some meaning? Or is he doomed to a life of superpowered boredom?”

The Complete Maus, by Art Spiegelman

Speigelman’s classic work about his father’s experiences in the Jewish holocaust manages the impossible – to be both harrowing and very funny – a must-read graphic novel.

“A journey through the inbetween places of the British landscape to the bleak coast, ‘Kingdom’ follows a family on their holiday to a small caravan park, where teenager Andrew explores the dunes, and half-remembered stories from the past are shared.”

Attack on Titan, by Hajime Isayama

There are nearly 30 volumes (and counting!) of this Japanese manga series, but it begins here.

“Several hundred years ago, humans were almost exterminated by giants. A small percentage of humanity survived by barricading themselves in a city protected by walls even taller than the tallest giants. Now the city has not seen a giant for over 100 years, before Elen and Mikasa witness the walls destruction by a super-giant.”

An autobiographical tale of coming-of-age in an Evangelical Christian family.

“Wrapped in the landscape of a blustery Wisconsin winter, Blankets explores the sibling rivalry of two brothers growing up in the isolated country, and the budding romance of two coming-of-age lovers. A tale of security and discovery, of playfulness and tragedy, of a fall from grace and the origins of faith.”

First in the quirkily funny six volume manga-like series set in Canada about a slacker musician who falls for an Amazon delivery girl but has to defeat her seven evil exes before they can be together. The 2010 film adaptation by Edgar Wright is also worth checking out.

“Marjorie Glatt feels like a ghost. A practical thirteen-year-old in charge of the family laundry business, her daily routine features unforgiving customers, unbearable P.E. classes, and the fastidious Mr. Saubertuck who is committed to destroying everything she’s worked for.

“Wendell is a ghost. A boy who lost his life much too young, his daily routine features ineffective death therapy, a sheet-dependent identity, and a dangerous need to seek purpose in the forbidden human world.

“When their worlds collide, Marjorie is confronted by unexplainable disasters as Wendell transforms Glatt’s Laundry into his midnight playground, appearing as a mere sheet during the day. While Wendell attempts to create a new afterlife for himself, he unknowingly sabotages the life that Marjorie is struggling to maintain.”

Lemony Snicket says: “For days after reading Brenna Thummler’s Sheets, I have been wandering my neighbourhood, haunted, enchanted, and in need of freshly pressed clothing.”

“In 2001, audiences first met and fell in love with a twelve-year-old criminal mastermind named Artemis Fowl. Since then, the eight-book series about his adventures has sold over twenty-five million copies throughout the world. To coincide with the major motion picture coming from the Walt Disney Studios in May 2020, here is an all-new graphic novel adaptation of the book.”

“Half Boy. Half God. ALL Hero.

“Most people get presents on their sixteenth birthday. I get a prophecy that could save or destroy the world.

“It happens when you’re the son of Poseidon, God of the Sea. According to an ancient prophecy, I turn sixteen and the fate of the entire world is on me. But no pressure.

“Now Kronos, Lord of the Titans, is beginning his attack on New York City. And the dreaded monster Typhon is also heading our way. So it’s me and forty of my demi-god friends versus untold evil…”

“Diana longs to prove herself to her legendary warrior sisters. But when the opportunity finally comes, she throws away her chance at glory and breaks Amazon law - risking exile - to save a mere mortal. Even worse, Alia Keralis is no ordinary girl and with this single brave act, Diana may have doomed the world.

“Alia just wanted to escape her overprotective brother with a semester at sea. She doesn’t know she is being hunted. When a bomb detonates aboard her ship, Alia is rescued by a mysterious girl of extraordinary strength and forced to confront a horrible truth: Alia is a Warbringer - a direct descendant of the infamous Helen of Troy, fated to bring about an age of bloodshed and misery. Together, Diana and Alia will face an army of enemies - mortal and divine - determined to either destroy or possess the Warbringer.”