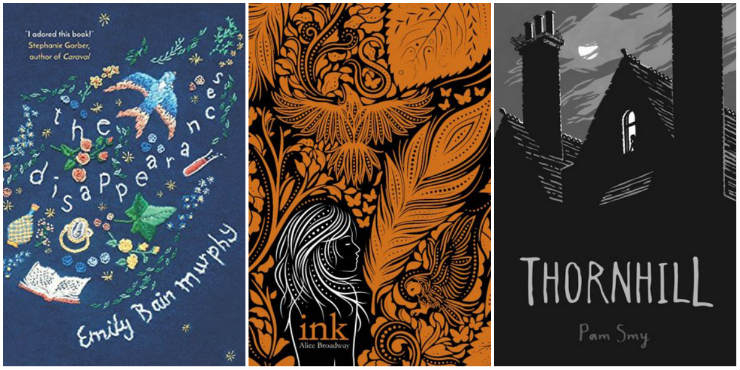 The Disappearances, by Emily Bain Murphy

“When Aila and her brother are sent to stay with her deceased mother’s oldest friend they think they are going to find refuge. What they find instead is a town beset by a curse, and a population sure that their mother has something to do with it. Every seven years something goes missing in this town: the stars, reflections, the ability to dream, the sound of music - And it is the eve of another ‘disappearance’.

“As Aila struggles to find out what is happening, she finds that the truth is the answer to the town’s woes, and facing that is where the future lies.”

Read Emily’s review of The Hate U Give →.

“There are no secrets in Saintstone. Imagine a world where your every action, your every deed, is marked on your skin for all to see. And Leora has something to hide.”

“Ink is a story about love, loyalty and the desire to live forever. It’s a tale that gets under your skin.”

This Mortal Coil, by Emily Suvada

“When a lone soldier, Cole, arrives with news of Lachlan Agatta’s death, all hope seems lost for Catarina. Her father was the world’s leading geneticist, and humanity’s best hope of beating a devastating virus.

“Then, hidden beneath Cole’s genehacked enhancements she finds a message of hope: Lachlan created a vaccine. Only she can find and decrypt it, if she can unravel the clues he left for her. The closer she gets, the more she finds herself at risk from Cartaxus, a shadowy organization with a stranglehold on the world’s genetic tech. But it’s too late to turn back. As the pieces fit together it’s clear there is one final secret that Cat must unlock. A secret that will change everything.”

“As she unpacks in her new bedroom, Ella is irresistibly drawn to the big old house that she can see out of her window. Surrounded by overgrown gardens, barbed wire fences and ‘keep out’ signs. It looks derelict.

“But that night a light goes on in one of the windows. And the next day she sees a girl in the grounds. Ella is hooked, the house has a story to tell, she is sure of it. Enter Thornhill, Institute for Children, and discover the dark secrets that lie within. But once inside, will you ever leave?”

“Fifteen-year-old Alena never really knew her political activist mother, who died when she was a baby. She has grown up with her older half-brother Danny and his boyfriend Nick in the east end of London.

“Now the area is threatened by a bomber who has been leaving explosive devices in supermarkets. It is only a matter of time before a bomb goes off. Against this increasingly fearful backdrop, Alena seeks to discover more about her past, while Danny takes a job working for a controversial politician.

“As her family life implodes, and the threat to Londoners mounts, Alena starts getting into trouble. Then she does something truly rebellious.”

Check out Kate’s review of Troublemakers.