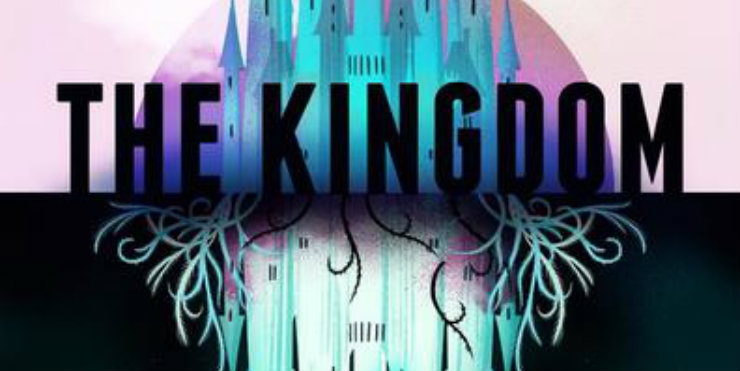 See The Kingdom in our catalogue

“Welcome to the Kingdom, a dazzling fantasy theme park where ‘happily ever after’ is not just a promise, but a rule.

“It’s a fairytale which ends in murder as the one of the ‘Fantasists’ goes renegade. Ana, a half-human, half-android princess, is tasked with entertaining visitors and making wishes come true but now she’s on trial, after finding herself experiencing emotions and romantic feelings against all her programming.”

The Kingdom truly both surprised and captivated me. When I first heard of it, I was instantly sold on the on its marketing as ‘Disneyland with a twist’. After hearing that, I knew I had to get my hands on it.

The use of transcripts, interviews, emails, photos and more within the book makes the whole reading experience a lot more exciting! Multimedia is becoming more popular within YA crime, mystery and thrillers, and I feel that it draws you further into the story. This sort of storytelling made reading The Kingdom so much more appealing and if it hadn’t been used, I don’t think the story would have had the same impact.

The plot is really thrilling, with lots of twists and turns to keep you hooked. The further you get into the book, the more shocks are revealed, making you want to continue reading and not put it down. It is beautifully written and explained and you can just immerse yourself in this alluring, yet somewhat dark, dystopian world.

I took to Ana straight away and her character development was second to none, as she changed so much over the course of the book. I loved Ana’s relationships with her sisters, especially Nia, whose actions ultimately took her down her destined path.

The Kingdom does feature some dark content, but it is handled in a very sensitive manner. There is a sexual assault and although it is featured off the page and only implied, it still impacts the reader. Other topics such as suicide, animal abuse and child abuse are all seen on the page, but are all dealt with in a thoughtful way.

The Kingdom is an alluring, captivating read that will leave you in shock and guessing right up to the very last page… which is perfect.