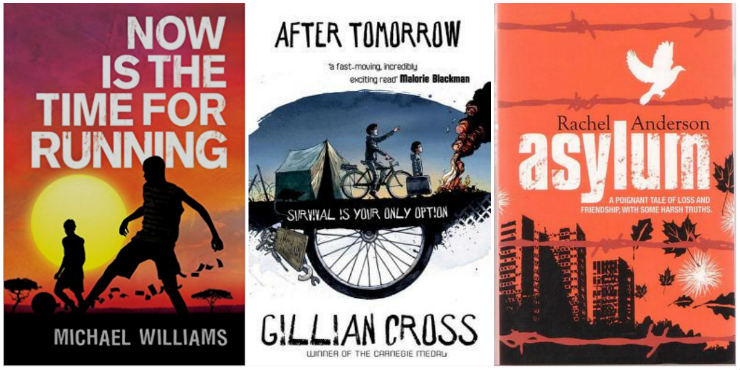 “Shif is just an ordinary schoolboy who loves chess and playing with his best friend. But, one day, he is forced to leave home to avoid conscription into the army. He embarks on an epic journey, in which he encounters dangers and cruelties - and great acts of human kindness - as he bravely makes his way to a future he can only imagine.”

The Bone Sparrow, by Zana Fraillon

“Subhi is a refugee. Born in a detention centre, all he knows of the world is that he’s at least 19 fence diamonds high, that the nice jackets never stay long, and at night the sea finds its way to his tent, bringing with it unusual treasures. Bringing him Jimmie.

“Jimmie lives on the Outside. Carrying a notebook that she’s unable to read and wearing a sparrow made out of bone around her neck - both talismans of her family’s past and the mother she’s lost - she strikes up an unlikely friendship with Subhi across the fence. As he reads aloud the tale of how Jimmie’s family came to be, both children discover the importance of their own stories in writing their futures.”

“12-year-old Omar and his brothers and sisters were born and raised in the beautiful and bustling city of Bosra, Syria. Omar doesn’t care about politics - all he wants is to grow up to become a successful businessman who will take the world by storm. But when his clever older brother, Musa, gets mixed up with some young political activists, everything changes. Before long, bombs are falling, people are dying, and Omar and his family have no choice but to flee their home with only what they can carry.

“Yet no matter how far they run, the shadow of war follows them - until they have no other choice than to attempt the dangerous journey to escape their homeland altogether. But where do you go when you can’t go home?”

A Dangerous Crossing, by Jane Mitchell

“Ghalib doesn’t want to leave his home in Syria. But the city has become too dangerous, and his family has no choice but to flee. Together they make their way through Syria to the Turkish border, where Ghalib gets separated from his family. Stricken with grief and fear, fighting cold, pain and hunger, he manages to make it to a refugee camp in Turkey.

“Ghalib is safe for now, but life in a refugee camp is wretched and hopeless, and this boy’s journey in search of safety is far from over.”

Salt to the Sea, by Ruta Sepetys

“It’s early 1945 and a group of people trek across Germany, bound together by their desperation to reach the ship that can take them away from the war-ravaged land. Four young people, each haunted by their own dark secret, narrate their unforgettable stories.

“This novel is based on a true story from the Second World War. When the German ship the Wilhelm Gustloff was sunk in port in early 1945 it had over 9000 civilian refugees, including children, on board. Nearly all were drowned.”

Read Ann’s review of Salt to the Sea →

“Alpha Coulibaly is emblematic of the refugee crisis today - just one of millions on the move, at the mercy of people traffickers, endlessly frustrated, endangered and exploited as he attempts to rejoin his family already in Europe. With a visa, Alpha’s journey would take a matter of hours; without one he is adrift for 18 months. Along the way he meets an unforgettable cast of characters, each one giving another human face to the crisis.”

After Tomorrow, by Gillian Cross

“Money is worthless. Armed robbers roam the streets. No one is safe. Matt and his little brother, Taco, escape through the Channel Tunnel. Their mother said they would be safe on the other side. She was wrong.”

Now is the Time for Running, by Michael Williams

“Meet Deo, a great footballer and a fierce protector of his older brother. When the soldiers come, they destroy the only home they’ve ever known. Now, Deo has nothing but his brother, and a football stuffed with billions of worthless dollars. And so starts their journey to find their father.”

The Bombs That Brought Us Together, by Brian Conaghan

“14-year-old Charlie Law has lived in Little Town, on the border with Old Country, all his life. He knows the rules: no going out after dark; no drinking; no litter; no fighting. You don’t want to get on the wrong side of the people who run Little Town.

“When he meets Pavel Duda, a refugee from Old Country, the rules start to get broken. Then the bombs come, and the soldiers from Old Country, and Little Town changes for ever. Sometimes, to keep the people you love safe, you have to do bad things. As Little Town’s rules crumble, Charlie is sucked into a dangerous game. There’s a gun, and a bad man, and his closest friend, and his dearest enemy. Charlie Law wants to keep everyone happy, even if it kills him. And maybe it will.”

“Armed with a suitcase and an old laundry bag filled with clothes, Kasienka and her mother leave Poland and head for the UK to find her father. Life is lonely for Kasienka. At home her mother’s heart is breaking and at school Kasienka finds it impossible to make new friends.”

Here I Stand: stories that stand for freedom, by Amnesty International (ed.)

“A varied and thought-provoking collection of short stories and poems for teens with a conscience, with striking cover illustrations by award-winning children’s laureate Chris Riddell. With contributions from Frances Hardinge, Sarah Crossan, Matt Haig, Neil Gaiman and many more.”

“Every summer Liam and Max roam the wild countryside of Northumberland - but this year things are different. One hot summer’s day a jackdaw leads the two boys into an ancient farm house where they find a baby, wrapped in a blanket, with a scribbled note pinned to it.”

“A victim of the war between Ethiopia and Eritrea, Alem finds himself alone in England, abandoned by his parents. This story charts his fate as he is moved from children’s home to foster home, and in and out of court hearings.”

“15-year-old Sunday wanted was a country that was democratic and respectful of human life, but all Rosa wants is somewhere safe, away from the bad things of the past. Through the eyes of these two young asylum seekers, this story explores ideas of Britain and belonging.”

“Nonie, Edie and Jenny are best friends with very individual tastes. But when the three friends meet a young African refugee called Crow, sketching a dress at the Victoria and Albert Museum, they discover a common passion and somehow find a way to make all of their dreams come true.”

“Patrick is happy living with his mum. Then Patrick meets Mosi, a quiet, polite boy who, along with his parents, is waiting for his asylum application to be processed. He discovers Mosi is terrified of someone. But who is it?

“Patrick and Mosi strike up an unlikely friendship. In trying to help each other, they will face situations that are both terrifying and dangerous. And Patrick will find out that there is much, much more to Mosi than at first appears.”

The Jungle, by Pooja Puri

“Mico has left his family, his home, his future. Setting out in search of a better life, he instead finds himself navigating one of the world’s most inhospitable environments - the Jungle. For Mico, just one of many ‘unaccompanied children’, the Calais refugee camp has a wildness, a brutality all of its own.”