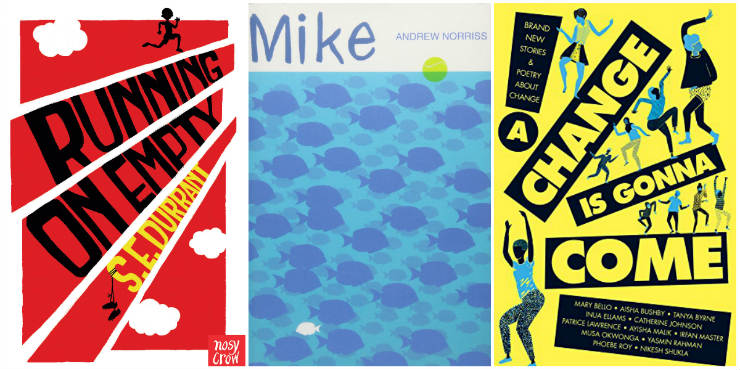 Ahead of Empathy Day (11 June 2019), EmpathyLab have put together a collection of YA books that promote empathy and understanding while also being cracking reads. Why not check out one of these brilliant titles?

“Sephy is a Cross - a member of the dark-skinned ruling class. Callum is a Nought - a ‘colourless’ member of the underclass who were once slaves to the Crosses. The two have been friends since early childhood. But that’s as far as it can go.

“Against a background of prejudice, distrust and mounting terrorist violence, a romance builds between Sephy and Callum - a romance that is to lead both of them into terrible danger.”

“Nobody can stop Nick Hall - he’s a star on the football team, and life is about to get a whole lot sweeter when he asks out the girl of his dreams. But then a bombshell announcement shatters his world. Nick will need all his courage, both on and off the pitch.”

“Alpha Coulibaly is emblematic of the refugee crisis today - just one of millions on the move, at the mercy of people traffickers, endlessly frustrated, endangered and exploited as he attempts to rejoin his family already in Europe.

“With a visa, Alpha’s journey would take a matter of hours; without one he is adrift for 18 months. Along the way he meets an unforgettable cast of characters, each one giving another human face to the crisis.”

Everything All at Once, by Steven Camden

“Zooming in across our cast of characters, we share moments that span everything from hoping to make it to the end of the week, facing it, fitting in, finding friends and falling out, to loving lessons, losing it, and worrying, wearing it well and worshipping from afar.

“In this collection of poems, Steven Camden’s poems speak to the kaleidoscope of teen experience and life at ‘big school’.”

“Hudson’s mum and stepdad have just told him he’s going to be a big brother. Which is a lot to take in, when he also has to deal with his grandad’s funeral, his dad’s issues and the way his own brain works.”

A Change is Gonna Come, by various

“Inspirational short story and poetry collection from 12 Black, Asian and minority ethnic writers. Voices and topics which build understanding and insight – such as bereavement, Islamophobia, sexuality, racism and mental health.”

“Rosie loves Jack. Jack loves Rosie. So when they’re split up, Rosie will do anything to find the boy who makes the sun shine in her head. Even run away from home. Even cross London and travel to Brighton alone, though the trains are cancelled and the snow is falling. Even though any girl might find that hard, let alone a girl with Down’s syndrome.”

“Jim and his family have halted by Dundray and the education people have been round mouthing the law. In school the Traveller kids suffer at the hands of teachers and other pupils alike, called ‘tinker-stinkers’, ‘dirty gyps’ and worse. Then the punches start. The only friendly face is Kit, a settle girl who takes Jim under her wing and teaches him to read in the great cathedral chamber in the cave below the town.”

“Shif is just an ordinary schoolboy who loves chess and playing with his best friend. But, one day, he is forced to leave home to avoid conscription into the army. He embarks on an epic journey, in which he encounters dangers and cruelties - and great acts of human kindness - as he bravely makes his way to a future he can only imagine.”

“Bailey is 17, mixed race, lives with his mum and dad in Hackney and spends all his time playing guitar or tending to his luscious ginger afro. Indigo is 17 and new to London, having grown up in the care system after being found by her mum’s dead body as a toddler. All Indigo wants is to know who she really is.

“When Bailey and Indigo meet at sixth form, sparks fly. But when Bailey becomes the target of a homeless man who seems to know more about Indigo than is normal, Bailey is forced to make a choice he should never have to make.”

Turtles All The Way Down, by John Green

“It all begins with a fugitive billionaire and the promise of a cash reward. Turtles All The Way Down is about lifelong friendship, the intimacy of an unexpected reunion, Star Wars fan fiction, and tuatara. But at its heart is Aza Holmes, a young woman navigating daily existence within the ever-tightening spiral of her own thoughts.”

Read Emily’s review of Turtles All The Way Down →

No Fixed Address, by Susin Nielsen

“Felix Knutsson is nearly thirteen, lives with his mother and pet gerbil Horatio, and is brilliant at memorising facts and trivia. So far, pretty normal. But Felix and his mom Astrid have a secret: they are living in a van. Astrid promises it’s only for a while until she finds a new job, and begs Felix not to breathe a word about it.

“So when Felix starts at a new school, he does his very best to hide the fact that most of his clothes are in storage, he only showers weekly at the community centre, and that he doesn’t have enough to eat. When his friends Dylan and Winnie ask to visit, Felix always has an excuse. But Felix has a plan to turn his and Astrid’s lives around: he’s going to go on his favourite game show Who, What, Where, When and win the cash prize. All he needs is a little luck and a lot of brain power.”

“Floyd is a star of under-18s’ tennis. Since he was little, all he’s ever known is the routine of training, of the matches, of trying to be the best. But something strange is happening. A boy called Mike has started turning up - a boy no one else can see. He keeps appearing whenever Floyd is playing tennis and making him lose his game.

“Floyd needs to discover what Mike wants - and what that will mean for him, and where his life is headed. Floyd is at the start of a journey that will lead him into a headlong collision with his family, girls, friendship, and self-discovery.”

“AJ’s grandfather has always been the one to keep his unusual family together, so when he dies things start to unravel at the edges. AJ is worried about his parents but they don’t really seem to notice. In order to deal with his grief and to keep his anxiety at bay, AJ does what he and his grandfather did best: running. Round and round the Olympic Park, aiming for the nationals, running to escape, AJ only seems to be heading ever closer to disaster.”