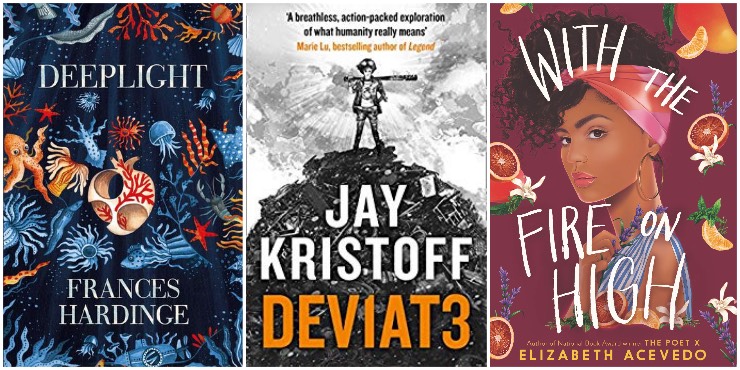 Illustrated novel from Sin City creator Miller. A Netflix series will follow in 2020.

“Touched by darkness, Nimue is an outcast to her people, forced to repress her magic. But when her village is slaughtered, the darkness begins to resurface. Tasked by her dying mother to reunite the Sword of Power with the sorcerer Merlin, she must save a terrorised Kingdom.

“Nimue’s mission leaves no room for revenge, but the growing power within her can think of little else. Hers was not the only decimated village and others face a similar fate. With the help of the rogue mercenary Arthur, Nimue must battle the armies of a corrupt king and, be it in victory or on the edge of a blade, discover the truth about her destiny once and for all.”

New from the author of the Costa award-winning The Lie Tree.

“On the streets of the Island of Lady’s Crave live 14-year-old urchins Hark and his best friend Jelt. They are scavengers: diving for relics of the gods, desperate for anything they can sell. But there is something dangerous in the deep waters of the undersea, calling to someone brave enough to retrieve it.

“When the waves try to claim Jelt, Hark will do anything to save him. Even if it means compromising not just who Jelt is, but what he is…”

The Secret Commonwealth, by Philip Pullman

“The second volume of Philip Pullman’s The Book of Dust sees Lyra, now twenty years old, and her daemon Pantalaimon, forced to navigate their relationship in a way they could never have imagined, and drawn into the complex and dangerous factions of a world that they had no idea existed. Pulled along on his own journey too is Malcolm; once a boy with a boat and a mission to save a baby from the flood, now a man with a strong sense of duty and a desire to do what is right.

“Theirs is a world at once familiar and extraordinary, and they must travel far beyond the edges of Oxford, across Europe and into Asia, in search for what is lost - a city haunted by daemons, a secret at the heart of a desert, and the mystery of the elusive Dust.”

Sequel to Carry On.

“Simon Snow did everything he was supposed to do. He beat the villain. He won the war. He even fell in love. Now comes the good part, right? Now comes the happily ever after. So why can’t Simon Snow get off the couch? What he needs, according to his best friend, is a change of scenery. He just needs to see himself in a new light.

“That’s how Simon and Penny and Baz end up in a vintage convertible, tearing across the American West. They find trouble, of course. (Dragons, vampires, skunk-headed things with shotguns.) And they get lost. They get so lost, they start to wonder whether they ever knew where they were headed in the first place.”

Fountains of Silence, by Ruta Sepetys

From the author of the Carnegie-winning Salt to the Sea.

“Madrid, 1957. Tourists and foreign businessmen flood into Spain under the welcoming guise of sunshine and wine while Spanish citizens are gripped by a dark secret. Daniel Matheson, the son of an oil tycoon, hopes to connect with the country of his mother’s birth through the lens of his camera.

“Photography - and fate - introduce him to Ana, a hotel maid, whose family is suffering under the fascist dictatorship of General Franco. Daniel and Ana’s lives and hearts collide as they unite to uncover the hidden darkness within the city - a darkness that could engulf them all.”

The Maple Murders, by Micol Ostow

Riverdale story with Archie, Betty and the gang.

“Riverdale is clamouring with excitement over news that an old town tradition is suddenly being revived: the Riverdale Revels. The festival supposedly has a long history, dating back to the town’s settlers’ first successful maple tapping. But there’s no record of the Revels anywhere. Archie, Betty, Veronica and Jughead think there must be more to the story. And when a skeleton is uncovered in a 75-year-old time capsule on the first night of the festival, they know they’re right.”

“It’s been three months since the colony world of Meridian was invaded by the alien alliance known as the Covenant. Under close supervision by the Office of Naval Intelligence and Meridian’s Militia forces, Evie, Dorian, Saskia and Victor have been training hard to return to their home and assist the UNSC in a mission. But when they arrive on Meridian’s surface, they find a world in turmoil.”

“Lexi’s angry. And it’s getting worse. If only she could stop losing her temper and behave herself, her step-father would accept her, her mum would love her like she used to and her step-brother would declare his crushing desire to spend the rest of his life with her. She wants these things so badly she determines to swallow her anger and make her family proud. But pushing fury down doesn’t make it disappear. Instead, it simmers below the surface waiting to erupt. There’ll be fireworks when it does.”

“After a battle that broke hearts, minds, and bodies, two friends find themselves on opposite sides of the same quest.

“Shattered by the discovery that she is not at all who or what she believed, Eve joins forces with her new ‘siblings’. Meanwhile, Lemon finds a sense of belonging –perhaps even love – in an enclave of other genetic deviates.

“But with friends and enemies, heroes and villains, wearing interchangeable faces, nothing is as it seems. Soon, Eve and Lemon are racing against each other to find a missing girl whose DNA may hold the key to saving or destroying their broken world.”

The Places I’ve Cried in Public, by Holly Bourne

Another winner from the queen of UK YA.

“Amelie loved Reese. And she thought he loved her. But she’s starting to realise love isn’t supposed to hurt like this. So now she’s retracing their story and untangling what happened by revisiting all the places he made her cry. Because if she works out what went wrong, perhaps she can finally learn to get over him.”

“Predatory kraken that sing with and for - their kin; band members and betrayed friends who happen to be demonic; harpies as likely to attract as repel. Welcome to a world where humans live side by side with monsters, from vampires both nostalgic and bumbling to an eight-legged alien who makes tea. Here you’ll find mercurial forms that burrow into warm fat, spectral boy toys, a Maori force of nature, a landform that claims lives, and an architect of hell on earth.”

With the Fire on High, by Elizabeth Acevedo

New from the 2019 Carnegie Award winner for The Poet X.

“Ever since she got pregnant, 17-year-old Emoni’s life has been about making the tough decisions - doing what has to be done for her young daughter and her grandmother. Keeping her head down at school, trying not to get caught up with new boy Malachi. The one place she can let everything go is in the kitchen, where she has magical hands - whipping up extraordinary food beloved by everyone.

“Emoni wants to be a chef more than anything, but she knows it’s pointless to pursue the impossible. There are rules she has to play by. And yet, once she starts cooking, and gets that fire on high, she sees that her drive to feed will feed her soul and dreams too. And anything is possible.”

“Vector may just be the deadliest enemy Dekka and the group will ever face. He is a swarm of disease-bearing insects. His victims are hit with a wide range of supercharged diseases, and are then unable to die, but go on and on in a living hell. With Sam, Astrid and Edilio back to help the them, they form a team known as the Rockborn Gang. The also have a new member: Simone. A blue skinned punk who can fly. But Vector is only just the beginning, and the Rockborn Gang are forced to question if everything they’ve gone through until now is even real.”

New title for the Spellslinger series.

“Kellen and Reichis are settling into their new lives as protectors of the young queen and dealing with the constantly shifting threats to her reign and to her life. For the first time in his life, Kellen feels as if he’s becoming the kind of man that his mentor Ferius had wanted him to be. Even Reichis has come to appreciate having a noble purpose - so long as no one minds him committing the occasional act of theft from the royal treasury.

“But what seems to be a simple card game between Kellen and an old man is soon revealed to be a deadly game of wits in which a powerful mage has trapped the queen’s spellslinger in order to kill him.”

The Beautiful, by Renée Ahdieh

“In 1872, New Orleans is a city ruled by the dead. But to 17-year-old Celine Rousseau, it’s also a safe haven after she’s forced to flee her life in Paris. Quickly enraptured by the vibrant city, from its music to its extravagant soirées and even its danger, she becomes embroiled in the city’s glitzy underworld, and particularly the group known as La Cour des Lions. But when a body is found in their lair, Celine is forced to battle her attraction for the group’s enigmatic leader, Sébastien Saint Germain, and suspicions about his guilt, along with her own secrets.

“As more bodies are discovered, New Orleans becomes gripped by the terror of a serial killer on the loose. But when she finally takes matters into her own hands, she finds herself caught in the midst of an age-old feud between the darkest creatures of the night, where the price of forbidden love is her life.”

Into the Crooked Place, by Alexandra Christo

First of a new duology from the author of To Kill a Kingdom.

“Magic rules the city of Creije Capital and Tavia Syn knows just how many tricks she needs up her sleeve to survive. Selling dark magic on the streets for her kingpin, she keeps clear of other crooks, counting the days until her debt is paid and she can flee her criminal life.

“But then, one day, with her freedom in sight, Tavia uncovers a sinister plot that threatens to destroy the realm she calls home. Desperate to put an end to her kingpin’s plan, Tavia forms an unlikely alliance with three crooks even more deadly than her.”

The End and Other Beginnings: stories from the future, by Veronica Roth

Six short stories from the author of Divergent and Carve the Mark.

“Within this masterful collection, no world is like the other.

“Full of friendship and revenge, each story and setting is more strange and wonderful than the last, brimming with new technologies and beings. And yet, in these futuristic lands, the people must still confront deeply human emotions and dilemmas.

“Veronica Roth reaches into the unknown and immerses readers into six short stories that feel startlingly familiar and profoundly beautiful.”