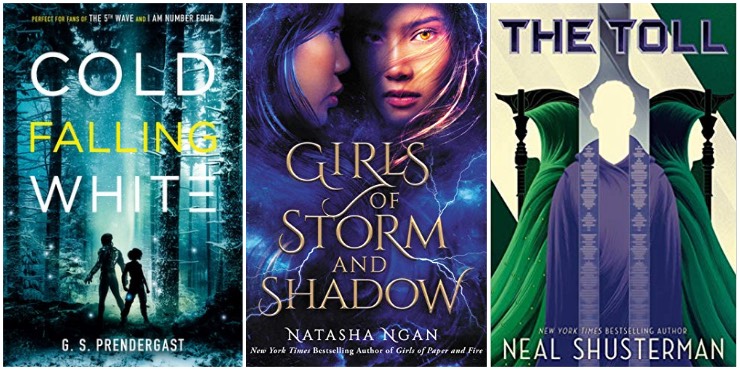 YA debut from the author of the Women’s Prize nominated Freshwater.

“There are no more monsters anymore, or so the children in the city of Lucille are taught. With doting parents and a best friend named Redemption, Jam has grown up with this lesson all her life. But when she meets Pet, a creature made of horns and colours and claws, who emerges from one of her mother’s paintings and a drop of Jam’s blood, she must reconsider what she’s been told.

“Pet has come to hunt a monster, and the shadow of something grim lurks in Redemption’s house. Jam must fight not only to protect her best friend, but also to uncover the truth.”

Call Down the Hawk, by Maggie Stiefvater

First title in a new trilogy set in the same universe of the Raven Cycle. Follow the adventures of the Lynch family after the events of The Raven King.

The Queen of Nothing, by Holly Black

Conclusion to the Folk of the Air series.

“After being pronounced Queen of Faerie and then abruptly exiled by the Wicked King Cardan, Jude finds herself unmoored, the queen of nothing. She spends her time with Vivi and Oak, watching reality television, and doing odd jobs, including squaring up to a cannibalistic faerie.

“When her twin sister Taryn shows up asking a favour, Jude jumps at the chance to return to the Faerie world, even if it means facing Cardan, who she loves despite his betrayal. When a dark curse is unveiled, Jude must become the first mortal Queen of Faerie and break the curse, or risk upsetting the balance of the whole Faerie world.”

The Toll, by Neal Shusterman

“It’s been three years since Rowan and Citra disappeared; since Scythe Goddard came into power; since the Thunderhead closed itself off to everyone but Grayson Tolliver. In this pulse-pounding finale to Neal Shusterman’s Arc of a Scythe trilogy, constitutions are tested and old friends are brought back from the dead.”

“Xander Liu survived the end of the world—just barely. For more than a year he has outsmarted, hidden from, and otherwise avoided the ruthless alien invaders, the Nahx, dodging the deadly darts that have claimed so many of his friends. When the murder of his friend Raven leaves him in the protective company of August, a rebellious Nahx soldier, Xander is finally able to make his way back to human controlled territory and relative safety.

“But safety amongst the humans is not what it seems. Nothing is anymore.

“Raven remembers dying in the arms of August. She remembers the pain, and the way he cried as she faded away. But months later when she wakes up on a wide expanse of snowy sand dunes, shackled to a boy she thought was dead too, she has a lot of questions. What has happened to her and the other reanimated humans gathered on the dunes? What is the meaning of the Nahx ships that hover ominously above them? And most pressing of all, where is August, who promised to keep her safe?

“In the shadow of an unforgiving Canadian winter, Xander and Raven find themselves on opposite sides of an alien war neither of them signed up for. Left with little choice about their roles in the great battle that now seems inevitable, they search for answers and allies, all while feeling inexorably drawn back the place it seems their respective fates were determined, and to the one who determined them: August.”

“For Penny Lee high school was a total nonevent. Her friends were okay, her grades were fine, and while she somehow managed to land a boyfriend, he doesn’t actually know anything about her. When Penny heads to college in Austin, Texas, to learn how to become a writer, it’s 79 miles and a zillion light years away from everything she can’t wait to leave behind.

“Sam’s stuck. Literally, figuratively, emotionally, financially. He works at a café and sleeps there too, on a mattress on the floor of an empty storage room upstairs. He knows that this is the god-awful chapter of his life that will serve as inspiration for when he’s a famous movie director but right this second the $17 in his checking account and his dying laptop are really testing him.

“When Sam and Penny cross paths it’s less meet-cute and more a collision of unbearable awkwardness.”

Girls of Storm and Shadow, by Natasha Ngan

Sequel to Girls of Paper and Fire.

“Lei, the naive country girl who became a royal courtesan, is now known as the Moonchosen, the commoner who managed to do what no one else could. But slaying the cruel Demon King wasn’t the end of the plan - it’s just the beginning. Now Lei and her warrior love Wren must travel the kingdom to gain support from the far-flung rebel clans. The journey is made even more treacherous thanks to a heavy bounty on Lei’s head, as well as insidious doubts that threaten to tear Lei and Wren apart from within.

“Meanwhile, an evil plot to eliminate the rebel uprising is taking shape, fuelled by dark magic and vengeance. Will Lei succeed in her quest to overthrow the monarchy and protect her love for Wren, or will she fall victim to the sinister magic that seeks to destroy her?”