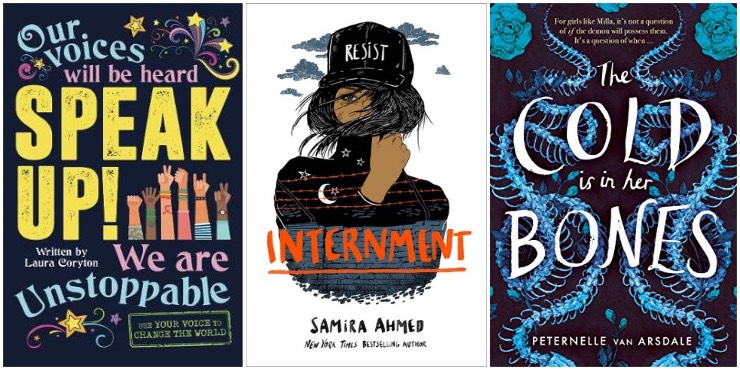 Latest in the DC Icons series, where popular YA authors make DC superheroes’ stories their own.

“Clark Kent has always been faster, stronger and better than everyone around him. But he wasn’t raised to show off, and drawing attention to himself could be dangerous. Plus, it’s not like he’s earned his powers… yet.

“But power comes with a price. Lately it’s difficult to hold back and keep his heroics in the shadows. When Clark follows the sound of a girl crying, he comes across Gloria Alvarez and discovers a dark secret lurking in Smallville. Teaming up with his best friend, Lana Lang, he throws himself into the pursuit of the truth. What evil lies below the surface of his small town? And what will it cost Clark to step into the light to become the future Man of Steel?”

Children of Virtue and Vengeance, by Tomi Adeyemi

Sequel to the breakout YA debut of 2018, Children of Blood and Bone.

“After battling the impossible, Zélie and Amari have finally succeeded in bringing magic back to the land of Orïsha. But the ritual was more powerful than they could’ve imagined, reigniting the powers of not only the maji, but of nobles with magic ancestry, too. Now, Zélie struggles to unite the maji in an Orïsha where the enemy is just as powerful as they are.

“But when the monarchy and military unite to keep control of Orïsha, Zélie must fight to secure Amari’s right to the throne and protect the new maji from the monarchy’s wrath. With civil war looming on the horizon, Zélie finds herself at a breaking point: she must discover a way to bring the kingdom together or watch as Orïsha tears itself apart.”

“Set in a horrifying ‘fifteen minutes in the future’ United States, seventeen-year-old Layla Amin is forced into an internment camp for Muslim-Americans along with her parents. With the help of newly-made friends also trapped within the camp, her boyfriend on the outside, and an unexpected alliance, Layla begins a journey to fight for freedom, leading a revolution against the internment camp’s Director and his guards.”

Speak Up!, by Laura Coryton

“Written by Laura Coryton, who led the international campaign against tampon tax, Speak Up! is a vital and timely book exploring what it means to stand up for what you believe in on both a public and personal level. Laura explores how to make sure your voice is heard as well as what happens when your voice is challenged by others. She tackles tricky subjects like feminism, consent, online bullying and self-confidence in a meaningful but accessible and entertaining way.”

“An anthology of stories and poetry by top LGBTQ+ YA authors and new talent, responding to the broad theme of pride. Each story has an illustration by an artist identifying as part of the LGBTQ+ community.”

With a foreword by Juno Dawson.

How to Rob a Bank, by Tom Mitchell

“When fifteen-year-old Dylan accidentally burns down the house of the girl he’s trying to impress, he feels that only a bold gesture can make it up to her. A gesture like robbing a bank to pay for her new home. Only an unwanted Saturday job, a tyrannical bank manager, and his unfinished history homework lie between Dylan and the heist of century. And really, what’s the worst that could happen?”

From the creators of Jane, the Fox & Me.

“In this powerful new graphic novel from Fanny Britt and Isabelle Arsenault, we meet Louis, a young boy who shuttles between his mum’s home in the city and his dad’s house in the country, with his little brother Truffle, who loves to sing James Brown songs. While coming to terms with the sadness and complexities of his divorced parents’ relationship, Louis - with the help of his best friend, Boris - is also trying to summon up the courage to speak to his true love, Billie.

“Joe Quinn tells everyone about the poltergeist in his house, but no one believes him. No one that is, except for Davey. He’s felt the inexplicable presence in the rooms, he’s seen random objects fly through the air. And there’s something else - a memory of his beloved sister, and a feeling deep down that somehow it might be possible for ghosts to exist.”

The Truth About Keeping Secrets, by Savannah Brown

Debut novel from the poet and YouTuber.

“Sydney’s dad is the only psychiatrist for miles around their small Ohio town. He is also unexpectedly dead. Is Sydney crazy, or is it kind of weird that her dad - a guy whose entire job revolved around other peoples’ secrets - crashed alone, with no explanation? And why is June Copeland, homecoming queen and the town’s golden child, at his funeral?

” As the two teenagers grow closer in the wake of the accident, it’s clear that not everyone is happy about their new friendship. But what is picture perfect June still hiding? And does Sydney even want to know?”

The Near Witch, by V. E. Schwab

Revamped reissue of the previously out-of-print debut from the author of the Villains and Darker Shade of Magic series.

“‘The Near Witch’ is only an old story told to frighten children. If the wind calls at night, you must not listen. The wind is lonely, and always looking for company. There are no strangers in the town of Near.

“These are the truths that Lexi has heard all her life. But when an actual stranger, a boy who seems to fade like smoke, appears outside her home on the moor at night, she knows that at least one of these sayings is no longer true. The next night, the children of Near start disappearing from their beds, and the mysterious boy falls under suspicion.”

Follow-up to The Exact Opposite of Okay.

“Izzy and her best friend Ajita are as hilarious as ever, using comedy to fight back against whatever the world throws at them, but Izzy is still reeling from her slut-shaming ordeal, feeling angry beyond belief and wondering - can they really make a change?”

“This isn’t a story about anything new. It’s about the oldest thing in the world. It’s about love.

“Tristan, a sixteen-year-old chess genius, lives with his Trinidadian aunt in a rapidly changing section of Brooklyn and uses his talent to earn money for his hustling cousin, Marcus. His world is turned upside-down when Izzy, a bright aspiring doctor raised on the Lower East Side, moves to the neighbourhood with her family, the first white family to settle on the block.

“A passionate romance springs up between the two, but they’re soon swept up in a series of escalating misfortunes: violent conflict between Marcus and Izzy’s twin brother; a twisted scheme of romantic deception devised by Izzy’s best friend, Brianna; and a secret that tests the bond of family loyalty and forces them to face impossible decisions.”

Prequel to the Slated series.

“Sam’s cosy life as daughter of the Deputy Prime Minister is about to end. These are turbulent times. Borders have closed and protests are turning violent. The government blames the country’s youth, and is cracking down hard. Mobile phones are blocked, gatherings are banned and dissent is brutally crushed.

“Sam is torn between family loyalty and doing what is right. When she meets Ava and Lucas her mind is made up. One girl, one choice. She can make a difference: she must. Even if her life - and her heart - are on the line.”

The Cold is in Her Bones, by Peternelle van Arsdale

New novel from the author of The Beast is an Animal inspired by the myth of Medusa.

“Milla knows two things to be true: Demons are real, and fear will keep her safe.

“Milla’s whole world is her family’s farm. She is never allowed to travel to the village and her only friend is her beloved older brother, Niklas. When a bright-eyed girl named Iris comes to stay, Milla hopes her loneliness might finally be coming to an end. But Iris has a secret she’s forbidden to share: The village is cursed by a demon who possesses girls at random, and the townspeople live in terror of who it will come for next.

“Now, it seems, the demon has come for Iris. When Iris is captured and imprisoned with other possessed girls, Milla leaves home to rescue her and break the curse forever. Her only company on the journey is a terrible new secret of her own: Milla is changing, too, and may soon be a demon herself.”

“Dylan and Tristan’s epic love story continues in the third and final book in the ‘Ferryman’ fantasy trilogy. Once, they escaped death but now they face a terrible choice, to save innocent lives they must be parted, forever. Is there love without sacrifice?”

Sky in the Deep, by Adrienne Young

“Raised to be a warrior, seventeen-year-old Eelyn fights alongside her Aska clansmen in an ancient, god-decreed rivalry against the Riki clan. Her life is brutal but simple - train to fight and fight to survive. Until the day she sees the impossible on the battlefield - her brother, fighting with the enemy - the brother she watched die five years ago. Eelyn loses her focus and is captured.

“Now, she must survive the winter in the mountains with the Riki, in a village where every neighbour is an enemy, every battle scar possibly one she delivered.”