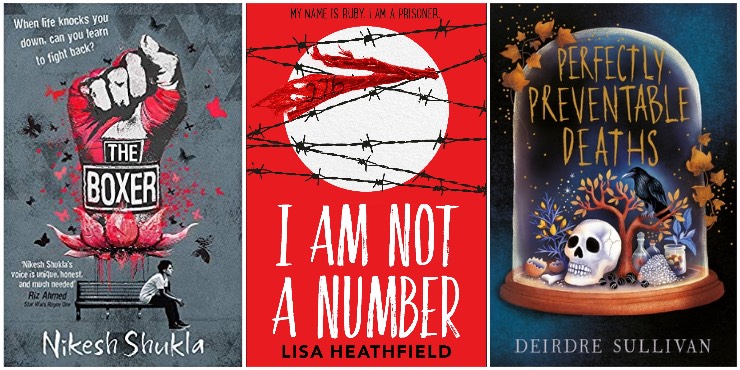 The Wickerlight, by Mary Watson

From the author of The Wren Hunt.

“It’s been two months since Laila was found lifeless on Kilshamble village green, not a mark on her. Rumour says she died of an overdose. Or maybe it was suicide? The autopsy found nothing, but somebody must know what happened.

“Now Laila’s sister Zara is ready to pick up the trail. But retracing her sister’s footsteps takes her to David, a Judge at the dangerous heart of an ancient magical feud. All too unwittingly, she begins to tread the same path that led her sister to the village green.”

“Tabby Brown is tired of trying to fit in with her classmates. She doesn’t want to go to parties at the weekend - in fact, she would much rather snuggle up on the sofa with her favourite book. It’s like she hasn’t found her people.

“That is, until she moves to a new town where a book club, The Paper & Hearts Society, is recruiting. Tabby might just be in luck. Enough of her old ‘friends’ who only talk to her when they need something. It’s time for Quidditch themed fancy dress parties, games like ‘shut up and Shakespeare’ - and lots of chocolate.”

The Hormone Diaries: the bloody truth about our periods, by Hannah Witton

More frank, no-frills info from the author of Doing It!.

“When Hannah Witton started documenting her journey coming off the pill and re-getting her period, she wasn’t anticipating the reaction, from people of all ages, that talking about it would bring. It exposed a glaring gap - the resources and the spaces to talk honestly about periods just aren’t there. And with more and more research showing that your period and your hormones can affect literally every area of your life, this is a problem.

“Inspired by her YouTube series of the same name, The Hormone Diaries draws on Hannah’s own experiences and, through crowdsourcing on her social media platforms, those of her fans too. With her trademark honesty and humour, Hannah explores and demystifies topics surrounding periods, hormones and contraception, to offer readers support, information and advice.”

“Fifteen-year-old twins Madeline and Catlin move to a new life in Ballyfran, a strange isolated Irish town, a place where the earth is littered with small corpses and unspoken truths. A place where, for the last sixty years, teenage girls have gone missing in the surrounding mountains.

“As distance grows between the twins - as Catlin falls in love, and Madeline begins to understand her own nascent witchcraft - Madeline discovers that Ballyfrann is a place full of predators. And when Catlin falls into the gravest danger of all, Madeline must ask herself who she really is, and who she wants to be - or rather, who she might have to become to save her sister.”

The Boxer, by Nikesh Shukla

New from the author of Run, Riot.

“Told over the course of the ten rounds of his first fight, this is the story of amateur boxer Sunny.

“A 17-year-old feeling isolated and disconnected in the city he’s just moved to, Sunny joins a boxing club to learn to protect himself after a racist attack. He finds the community he’s been desperately seeking at the club, and a mentor in trainer Shobu, who helps him find his place in the world.

“But racial tensions are rising in the city, and when a Far Right march through Bristol turns violent, Sunny is faced with losing his new best friend Keir to radicalisation.”

I Am Not a Number, by Lisa Heathfield

“Ever since the Traditional Party came to power, everything that 15-year-old Ruby took for granted - hanging out with her boyfriend Luke, voicing her opinion and wearing what she wants - have been taken away. And things are getting worse. Soon Ruby and her family find themselves taken to a prison camp far from home. Each person is allocated a number - Ruby is number 276.

“Forced into hard labour and with friends and family going missing every day, Ruby knows she has to escape and let the world know what is happening. She has to somehow cling on to her identity and fight back. Her life depends on it.”

Ghosts of the Shadow Market, by Cassandra Clare

Bind-up of Shadowhunters stories either new or previously only available as eBooks.

“The Shadow Market is a meeting point for faeries, werewolves, warlocks and vampires. There the Downworlders buy and sell magical objects, make dark bargains, and whisper secrets they do not want the Nephilim to know. Through two centuries, however, there has been a frequent visitor to the Shadow Market from the City of Bones. As a Silent Brother, Brother Zachariah is sworn keeper of the laws and lore of the Nephilim. But once he was a Shadowhunter called Jem Carstairs, and his love, then and always, is the warlock Tessa Gray.

“Follow Brother Zachariah and see Anna Lightwood’s doomed romance, Matthew Fairchild’s great sin and Tessa Gray plunged into a world war. Valentine Morgenstern buys a soul at the Market and a young Jace Wayland’s soul finds safe harbour. In the Market is hidden a lost heir and a beloved ghost, and no-one can save you once you have traded away your heart. Not even Brother Zachariah.”

From the author of Noah Can’t Even.

“Painfully shy Alex lands a summer job at Wonderland, a run-down seaside arcade. He gets to know the other teen misfits who work there, and he even starts developing feelings for co-worker Ben.

“Then, as debtors close in, Alex and his new friends take it on themselves to save their employer. But in Wonderland nothing is quite what it seems.”

Call It What You Want, by Brigid Kemmerer

New from the author of A Curse So Dark and Lonely.

“Rob had it all - friends, a near-guaranteed lacrosse scholarship to college and an amazing family - but all that changed when his dad was caught embezzling funds from half the town. Now he’s a social pariah.

“Maegan always does the right thing. But when her sister comes home from college pregnant, she’s caught between telling their parents the truth about the father and keeping her sister’s trust.

“When Rob and Maegan are paired together for a project, they form an unexpectedly deep connection. But Rob’s plan to fix his father’s damage could ruin more than their new friendship.”