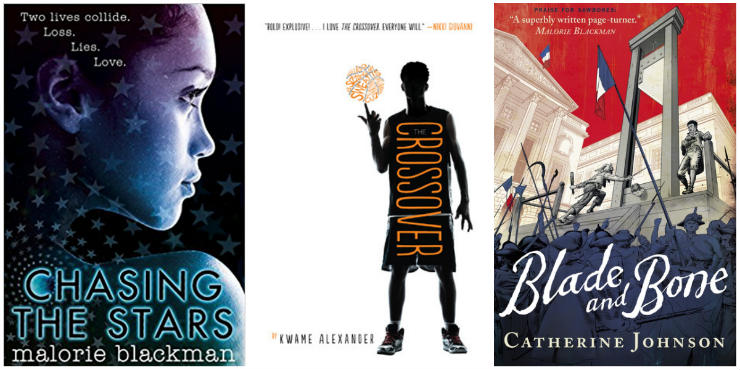 Thomas’ incredible debut novel, The Hate U Give was inspired by the Black Lives Matter movement. It won the Waterstones Children’s Book Prize 2018, was shortlisted for the Carnegie Medal and is being made into a major film. Book reviewer Emily has described it as “powerful, striking and moving”.

Thomas’ new novel, On the Come Up is due out in June and will appear in our catalogue soon!

Lawrence’s latest book, Indigo Donut, has been shortlisted for the YA Book Prize 2018.

Long Way Down is a powerful and stunningly illustrated verse novel which was longlisted for the National Book Award for Young People’s Literature in the US. Reviewer Emily has described it as “an unforgettable book that you won’t be able to put down.”.

Blackman’s latest standalone novel is Chasing the Stars, a space-based reinterpretation of Othello.

Wheatle is also the author of Liccle Bit. He has been described as a major voice in British children’s literature and was awarded an MBE for services to literature in 2008.

American poet and novelist Alexander won the 2015 Newbery Medal for his verse novel The Crossover. The sequel, Booked, has also been well-received. A prequel, Rebound, is due out in May and will be in our catalogue soon!

Adeyemi’s debut fantasy novel, Children of Blood and Bone is inspired by the folklore of West Africa. It is one of the biggest YA releases of 2018 and has already secured a huge movie deal.

Sawbones which won the Young Quills Prize for Best Historical Fiction (12+) and was nominated for the Carnegie Medal 2015, is “packed full of intriguing historical information and a brilliant portrait of the opposing forces at work in Victorian London”. Johnson followed it with a sequel, Blade and Bone.

Overheard in a Tower Block was longlisted for the Carnegie Medal 2018 and is described by publishers Otter-Barry was ‘a powerful and moving poetic narrative about growing up in the city’.