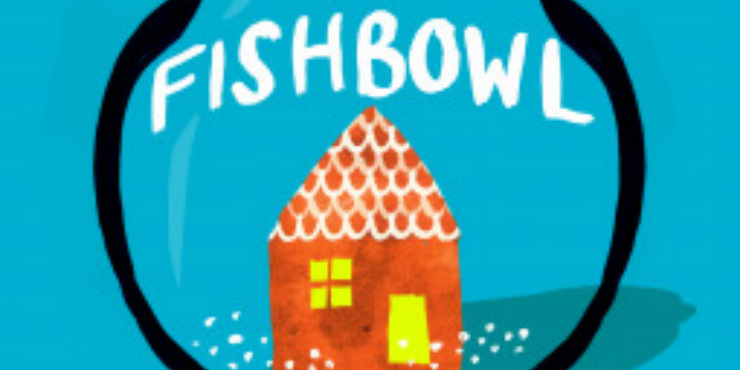 See Life in a Fishbowl in our catalogue.

Life in A Fishbowl is one of those books that stays with you long after you’ve read the final page.

Fifteen-year-old Jackie Stone is a prisoner in her own house. Everything she says and does 24/7 is being taped and broadcast to every television in America. Why? Because her dad is dying of a brain tumour and he has auctioned his life on eBay to the highest bidder: a ruthless TV reality show executive at ATN.

Her sister’s trust is gone, ever since she’s been dazzled by the cameras and her new-found infamy. Her privacy is gone. The whole family’s dignity is gone, as ATN twists their words and makes a public mockery of their lives on Life and Death. But most of all, Jackie fears that one day very soon her father will just be … gone.

Armed only with her ingenuity and the power of the internet, Jackie is determined to end the show and reclaim all of their lives, even in death.

I loved this book. I’m going to be honest though, you will need some tissues while you’re reading it as there are a few highly emotional moments.

Vlahos deals with issues in such a sensitive, poignant and searingly honest way to create this intensely realistic book that you just can’t put down. It certainly doesn’t pull any punches, with harrowing opening pages and a twist that will leave you reeling.

There is a highly-entertaining cast of characters that range from an unhinged billionaire playboy to a fame-obsessed nun. Each character is developed over the course of the book and their stories intertwine, weaving an intricate tapestry of what fame really costs.

Above all of those, is a unique and thought-provoking perspective that changed the entire plot and for me, was what really made this book stand out. However, I can’t mention any details without giving away parts of the plot, so trust me when I say it’s just a brilliant idea.

Life in A Fishbowl is a bittersweet fusion of emotions that won’t let you go.