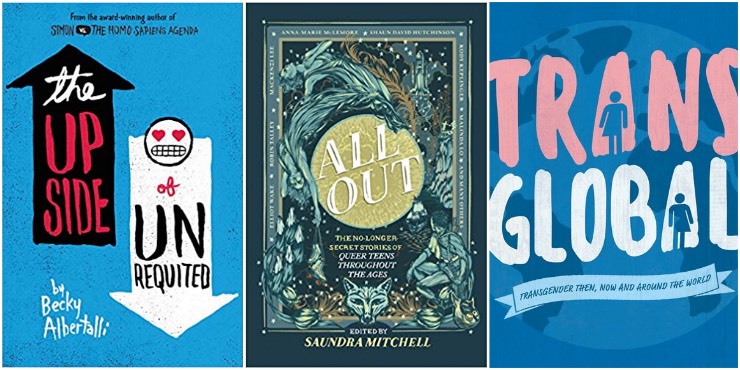 “Two women are connected across generations through the power of words. In 1955 18-year-old Janet Jones must keep the love she shares with her best friend a secret - in the age of McCarthyism, to be gay is to sin. But when Janet discovers a series of books about women falling in love with other women, it awakens something in her. As she juggles a romance she must keep hidden and a new-found ambition to publish her own story, she risks exposing herself - and Marie - to a danger all too real.

“62 years later, Abby Cohen can’t stop thinking about her senior project - classic 1950s lesbian pulp fiction. She feels especially connected to one author, ‘Marian Love’, and becomes determined to track her down and discover her true identity. But is Abby prepared for what she will find?”

“Charlie and Nick are at the same school, but they’ve never met - until one day when they’re made to sit together. They quickly become friends, and soon Charlie is falling hard for Nick, even though he doesn’t think he has a chance. But love works in surprising ways, and Nick is more interested in Charlie than either of them realised.”

“When she was little, Joni used to have dreams that she could fly. But these days her feet are firmly on the ground - they have to be when money’s tight and her dad can’t work and the whole family has to pull together to keep afloat.

“Then she meets Annabel. Annabel is everything Joni isn’t, and yet there’s a spark between them. Though Joni barely believes it at first, she thinks they might be falling in love. But when Annabel’s parents find out about the relationship, it’s clear they believe there are some differences that are impossible to overcome.”

What If It’s Us, by Becky Albertalli & Adam Silvera

“Meet Ben and Arthur. Ben is a battered dreamer who’s shipping his ex-boyfriend’s things back to him. Arthur is new to New York and struggling to fit in. After an memorable meet-cute in a New York post office, the boys lose touch only be be brought back together via a ‘missed connection’ advert. Is it fate? It looks like it. But after a series of disastrous first dates, Ben and Arthur may have to accept the universe should’ve minded its own business.”

Read Eleanor’s review of What If It’s Us →

Jack of Hearts (and other parts), by L. C. Rosen

“Meet Jack Rothman. He’s seventeen and loves partying, makeup and boys - sometimes all at the same time. His sex life makes him the hot topic for the high school gossip machine. But who cares? Like Jack always says: ‘It could be worse.’ He doesn’t actually expect that to come true.

“But after Jack starts writing an online sex advice column, mysterious love letters from an ‘admirer’ take a turn for the creepy. They know everything: where he’s hanging out, who he’s sleeping with, who his mum is dating. They claim they love Jack, but not his lifestyle. They need him to curb his sexuality, or they’ll force him.

“As his stalker starts to ratchet up the pressure, Jack must uncover their identity - before their obsession becomes genuinely dangerous.”

The Upside of Unrequited, by Becky Albertalli

“17-year-old Molly Peskin-Suso knows all about unrequited love - she’s lived through it 26 times. She crushes hard and crushes often, but always in secret. Because no matter how many times her twin sister, Cassie, tells her to woman up, Molly can’t stomach the idea of rejection. So she’s careful. Fat girls always have to be careful.

“Then a cute new girl enters Cassie’s orbit, and for the first time ever, Molly’s cynical twin is a lovesick mess. Meanwhile, Molly’s totally not dying of loneliness - except for the part where she is. Luckily, Cassie’s new girlfriend comes with a cute hipster-boy sidekick. Will is funny, flirtatious, and just might be perfect crush material. Maybe more than crush material. And if Molly can win him over, she’ll get her first kiss and she’ll get her twin back.”

Carry On: the rise and fall of Simon Snow, by Rainbow Rowell

“Simon Snow just wants to relax and savour his last year at the Watford School of Magicks, but no one will let him. His girlfriend broke up with him, his best friend is a pest and his mentor keeps trying to hide him away in the mountains where maybe he’ll be safe. Simon can’t even enjoy the fact that his room-mate and longtime nemesis is missing, because he can’t stop worrying about the evil git. Plus there are ghosts. And vampires. And actual evil things trying to shut Simon down. When you’re the most powerful magician the world has ever known, you never get to relax and savour anything.”

“Painfully geeky Noah Grimes think his best chance at social normalcy is to strike up a romance with Sophie. But his plans are hopelessly derailed when his best (and only) friend Harry kisses him at a party. That’s when things go from bad to utter chaos.”

“Noah and Harry are now officially boyfriends, but is Noah ready to go all the way? It’s no help that a group of cosmopolitan French exchange students have descended on Little Fobbing - including sexy Pierre Victoire, who seems to have his eye on Harry! Will Noah ever catch a break?”

“Every day a new body. Every day a new life. Every day a new choice. For as long as A can remember, life has meant waking up in a different person’s body every day, forced to live as that person until the day has ended. A always thought there wasn’t anyone else who was like this. A was wrong.

“Someday starts where Every Day left off. David Levithan takes readers further into the lives of A and Rhiannon, exploring more deeply what Every Day and Another Day had originally asked: What is a soul? What makes us human? And does gender matter when it comes to love?”

The Summer of Jordi Perez (and the best burger in Los Angeles), by Amy Spalding

“Seventeen, fashion-obsessed, and gay, Abby Ives has always been content playing the sidekick in other people’s lives. While her friends and sister have plunged headfirst into the world of dating and romances, Abby’s been happy to focus on her plus-size style blog and her dreams of taking the fashion industry by storm.

“When she lands a great internship at her favourite boutique, she’s thrilled to take the first step toward her dream career. Then she falls for her fellow intern, Jordi Perez. Hard. And now she’s competing against the girl shes kissing to win the coveted paid job at the end of the internship.”

“Rafe is a normal teenager from Boulder, Colorado. He plays soccer. He’s won skiing prizes. He likes to write.

“And, oh yeah, he’s gay. He’s been out since 8th grade, and he isn’t teased, and he goes to other high schools and talks about tolerance and stuff. And while that’s important, all Rafe really wants is to just be a regular guy. Not that GAY guy. To have it be a part of who he is, but not the headline, every single time.

“So when he transfers to an all-boys’ boarding school in New England, he decides to keep his sexuality a secret – not so much going back in the closet as starting over with a clean slate. But then he sees a classmate breaking down. He meets a teacher who challenges him to write his story. And most of all, he falls in love with Ben… who doesn’t even know that love is possible.”

Girl Mans Up, by M-E Girard

“All Pen wants is to be the kind of girl she’s always been. So why does everyone have a problem with it? They think the way she looks and acts means she’s trying to be a boy - that she should quit trying to be something she’s not. If she dresses like a girl, and does what her folks want, it will show respect. If she takes orders and does what her friend Colby wants, it will show her loyalty. But respect and loyalty, Pen discovers, are empty words.”

All Out: the no-longer-secret stories of queer teens throughout the ages, by Saundra Mitchell (ed.)

“Take a journey through time and genres to discover stories where queer teens live, love and shape the world around them.

“Seventeen young adult authors across the queer spectrum have come together to create a collection of beautifully written diverse historical fiction for teens. From a retelling of Little Red Riding Hood set in war-torn 1870s Mexico featuring a transgender soldier, to two girls falling in love while mourning the death of Kurt Cobain, forbidden love in a sixteenth-century Spanish convent or an asexual girl discovering her identity amid the 1970s roller-disco scene, All Out tells a diverse range of stories across cultures, time periods and identities, shedding light on an area of history often ignored or forgotten.”

Queer, There, and Everywhere: 23 people who changed the world, by Sarah Prager & Zoë More O’Ferrall

“World history has been made by countless lesbian, gay, bisexual, transgender, and queer individuals - and you’ve never heard of many of them.

“Queer author and activist Sarah Prager delves deep into the lives of 23 people who fought, created, and loved on their own terms. From high-profile figures like Abraham Lincoln and Eleanor Roosevelt to the trailblazing gender-ambiguous Queen of Sweden and a bisexual blues singer who didn’t make it into your history books, these astonishing true stories uncover a rich queer heritage that encompasses every culture, in every era.”

Can Everyone Please Calm Down? Mae Martin’s guide to 21st century sexuality, by Mae Martin

“Mae Martin is a Canadian comedian with an encyclopedic knowledge of Harry Potter trivia. Aside from this, if there’s one area that she’s 100% anecdotally and personally qualified to tackle, it’s sexuality: should there be any such thing as a ‘sexuality spectrum’, then Mae has probably existed at every point on it at some stage in her life. This book is Mae’s attempt to demystify sexuality by narrating her own often humiliating adventures in sex, dating and gender identity.”

Trans Global: transgender then, now and around the world, by Honor Head

“The whole concept of gender identity is being increasingly challenged and words such as non-binary, pansexual, transgender, cisgender and gender dysphoria are becoming commonplace. This book explores the cultures and people of the past who have embraced, challenged or quietly subverted society’s expectations about gender. It features the current stories of openly transgender people around the world in positions of power and authority, who are helping to increase recognition and acceptance of the trans community.”