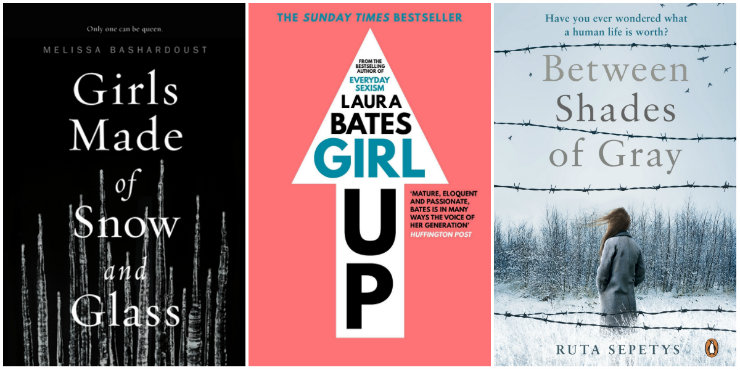 Am I Normal Yet?, How Hard Can Love Be?, What’s a Girl Gotta Do? and …And a Happy New Year?, by Holly Bourne

This series, featuring Evie, Amber and Lottie, introduced me to feminism. The girls face down tough issues with the combined powers of friendship, feminism and cheesy snacks. Funny, powerful and definitely relatable.

“Viv’s mum was a tough-as-nails, punk rock Riot Grrrl in the ’90s, and now Viv takes a page from her mother’s past and creates Moxie, a feminist zine that she distributes anonymously to her classmates. She’s just blowing off steam, but other girls respond and spread the Moxie message.

“As Viv forges friendships with other young women across the divides of cliques and popularity rankings, she realises that what she has started is nothing short of a girl revolution.”

This book will leave you feeling empowered and wanting to be a Moxie girl yourself. You can read my review of Moxie here.

The Exact Opposite of Okay, by Laura Steven

“Izzy O’Neill here! Impoverished orphan, aspiring comedian and Slut Extraordinaire, if the gossip sites are anything to go by.

“Izzy never expected to be 18 and internationally reviled. But when explicit photos involving her, a politician’s son and a garden bench are published online, the trolls set out to take her apart. Armed with best friend Ajita and a metric ton of nachos, she tries to laugh it off - but as the daily slut-shaming intensifies, she soon learns the way the world treats teenage girls is not okay.”

This timely ‘feminist firecracker of a novel’ comes out today and I can’t wait to read it!

The Disreputable History of Frankie Landau-Banks, by E. Lockhart

“As a girl, Frankie knows she is supposed to play by the rules, but the rules were made by old boys for boys and therefore are not her rules to begin with. She decides to take matters into her own hands, outsmarting the secret all-male society at her rich kid boarding school by tricking the members, including her own boyfriend, into believing her increasingly outrageous commands are their leader’s.

“Undaunted by her male peers, Frankie contests the old-fashioned idea that it’s the boys who rule the school proving that girls are not to be dismissed - even by her own father, a former member of the all-male society himself!”

The author of Genuine Fraud has done it again. E. Lockhart is making a habit of including strong women in her novels and I am so on board with it.

“Evelyn is 17, and though she is rich and clever, she may never be allowed to follow her older brother to university. Enraged that she is expected to marry her childhood sweetheart rather than be educated, she joins the Suffragettes, and vows to pay the ultimate price for women’s freedom.

“May is 15, and already sworn to the cause, though she and her fellow Suffragists refuse violence. When she meets Nell, a girl who’s grown up in hardship, she sees a kindred spirit. Together and in love, the two girls start to dream of a world where all kinds of women have their place.

This is fresh take on the Suffragette movement and a timely read for the centenary of women getting the vote. But don’t forget about the struggle many other women had to continue fighting to get their vote.

Read Amélie’s review of Things a Bright Girl Can Do →

Girls Made of Snow and Glass, by Melissa Bashardoust

“At 16, Mina’s mother is dead, her magician father is vicious, and her silent heart has never beat with love for anyone. She never guessed that her father cut out her heart and replaced it with one of glass. When she moves to Whitespring Castle and sees its king, Mina plans to win the king’s heart with her beauty, become queen, and finally know love.

“15-year-old Lynet looks just like her late mother, and one day she discovers why: a magician created her out of snow in the dead queen’s image. But despite being the dead queen made flesh, Lynet would rather be like her fierce and regal stepmother, Mina. She gets her wish when her father makes Lynet queen of the southern territories, displacing Mina. Now Mina is starting to look at Lynet with something like hatred, and Lynet must decide what to do - and who to be - to win back the only mother she’s ever known, or else defeat her once and for all.”

A feminist, dark re-telling of Snow White and a must-read for those who loved Because You Love To Hate Me.

“In this sci-fi thriller, Marie Lu conjures an immersive, exhilarating world where choosing who to trust may be the biggest gamble of all.”

Emika Chen is a character that will stay with you long after the final page, with her strength and intelligence.

A book that’s destined to become a modern classic. It’s all about the power of your voice and it deals with intersectional feminism, as it’s both Starr’s race and gender that allows others to dismiss her, at least at first. Read my review of The Hate U Give.

“She will become a legend but first she is Diana, Princess of the Amazons. And her fight is just beginning.

“Diana is desperate to prove herself to her warrior sisters. But when the opportunity comes, she throws away her chance at glory and breaks Amazon law to save a mere mortal, Alia Keralis. With this single heroic act, Diana may have just doomed the world. Alia is a Warbringer - a descendant of the infamous Helen of Troy, fated to bring about an age of bloodshed and misery.

“Diana and Alia will face an army of enemies, mortal and divine, determined to destroy or possess the Warbringer. To save the world, they must stand side by side against the tide of war.”

This novel is all about the power of female friendships and is jam-packed with girl power. If you liked the film last year, you’ll love this awesome YA interpretation. Read my review of Wonder Woman: Warbringer.

Girl Up, by Laura Bates

“They told you you need to be thin and beautiful. They told you to wear longer skirts, avoid going out late at night and move in groups - never accept drinks from a stranger, and wear shoes you can run in more easily than heels.

“They told you to wear just enough make-up to look presentable but not enough to be a slut; to dress to flatter your apple, pear, hourglass figure, but not to be too tarty. They warned you that if you try to be strong, or take control, you’ll be shrill, bossy, a ballbreaker. Of course it’s fine for the boys, but you should know your place.

“They told you ‘that’s not for girls’ - ‘take it as a compliment’ - ‘don’t rock the boat’ - ‘that’ll go straight to your hips’. They told you ‘beauty is on the inside’, but you knew they didn’t really mean it. Well I’m here to tell you something different.”

From the founder of Everyday Sexism, Girl Up is a guide for teenage girls that covers everything from body image to consent. A thought-provoking and funny non-fiction book.

Between Shades of Gray, by Ruta Sepetys

“One night 15-year-old Lina, her mother and young brother are hauled from their home by Soviet guards, thrown into cattle cars and sent away. They are being deported to Siberia.

“An unimaginable and harrowing journey has begun. Lina doesn’t know if she’ll ever see her father or her friends again. But she refuses to give up hope.”

This book sheds light on a part of history that I was unfamiliar with and features Lina, a brave and strong woman who survives awful atrocities, but also has a vulnerable side. I thought this was appropriate for Women’s’ History Month, as it explores a historical era few YA authors have tackled.

It Only Happens in the Movies, by Holly Bourne

“Audrey is over romance. Since her parents’ relationship imploded her mother’s been catatonic, so she takes a cinema job to get out of the house. But there she meets wannabe film-maker Harry. Nobody expects Audrey and Harry to fall in love as hard and fast as they do. But that doesn’t mean things are easy. Because real love isn’t like the movies.”

And we’re back to where it all began. Holly Bourne is a force to reckoned with within UKYA. This book and The Manifesto On How To Be Interesting are witty take-downs of parts of our society and it’s the way that she weaves feminist ideas into her stories that just amazes me.