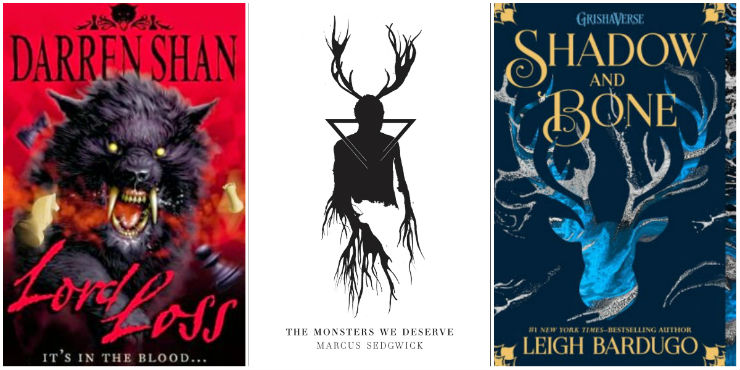 The Monsters We Deserve, by Marcus Sedgwick

“Taut, tense, terrifying. Prizewinning author Marcus Sedgwick writes of the monsters we create in literature and in our own minds in this reappraisal of Mary Shelley’s Frankenstein.”

“Billy is a street urchin, pickpocket and petty thief. Mr Creecher is a monstrous giant of a man who terrifies all he meets. Their relationship begins as pure convenience. But a bond swiftly develops between these two misfits as their bloody journey takes them ever northwards on the trail of their target - Victor Frankenstein.”

“When Cora and her sister are sent to stay with their elderly aunt in the isolated village of Bryers Guerdon, they receive a less than warm welcome. Auntie Ida’s life was devastated the last time two young girls were at Guerdon Hall, and now her nieces’ arrival has reawoken an evil that has lain waiting for years.”

Shadow and Bone, by Leigh Bardugo

“The Shadow Fold, a swathe of impenetrable darkness, crawling with monsters that feast on human flesh, is slowly destroying the once-great nation of Ravka.

“Alina, a pale, lonely orphan, discovers a unique power that thrusts her into the lavish world of the kingdom’s magical elite - the Grisha. Could she be the key to unravelling the dark fabric of the Shadow Fold and setting Ravka free?”

“When Grubbs Grady first encounters Lord Loss and his evil minions, he learns three things: the world is vicious, magic is possible, demons are real. He thinks that he will never again witness such a terrible night of death and darkness. He is wrong.”

Unnatural Creatures: a number of stories featuring unnatural creatures along with several other creatures who are unlikely, impossible, or do not exist at all, by Neil Gaiman & Maria Dahvana Headley (eds.), illustrated by Briony Morrow-Cribbs

“The griffin, the sunbird, manticores, unicorns - all manner of glorious creatures never captured in zoos, museums or photographs are packed vividly into this collection of stories. Neil Gaiman has included some of his own childhood favourites alongside stories classic and modern to spark the imagination of readers young and old.”

“Frey, Ovie, Juniper, and Runa are the Boneless Mercies - girls hired to kill quickly, quietly, and mercifully. They help young wives get rid of old husbands, or the lingering sick slip into the next world.

“But Frey is weary of the death trade and dreams of a life bigger than the one she’s been dealt. So when she hears of an unstoppable monster slaughtering men, women, and children in a nearby town, she decides this is the Mercies’ one chance out. The fame and fortune of bringing down such a beast would ensure a new future, far from the death trade, for all the Mercies.

“But Frey soon learns the real meaning of sacrifice, and the cost of guts and glory. Her actions may change the fate of girls in the world forever.”

“Angelmonster is a powerful story about Mary Shelley, author of Frankenstein, and the thin line between love and obsession.”

“Victor Frankenstein, a Swiss scientist, has a great ambition: to create intelligent life. But when his creature first stirs, he realises he has made a monster. A monster which, abandoned by his master and shunned by everyone who sees it, follows Dr Frankenstein with murder and horrors to the very ends of the earth.”

“Beware Count Dracula. He has been dead for centuries, yet still he walks the Earth. His Transylvanian castle is a dark and mysterious place, where terror is constant and survival is rare. Visitors are always welcome, to a fate worse than death.”

“This dark psychological fantasy is more than a moral tale. It is also a product of its time, drawing on contemporary theories of class, evolution and criminality and the secret lives behind Victorian propriety, to create a unique form of urban Gothic.”

The Island of Doctor Moreau, by H. G. Wells

“Prendick, a naturalist, is shipwrecked on the island retreat of notorious vivisector, Dr Moreau. In a laboratory called the House of Pain, Moreau manufactures ‘humanised’ animals known as the Beast People, whom he controls through fear - until the terrifying day when one of his degraded victims turns against him.”