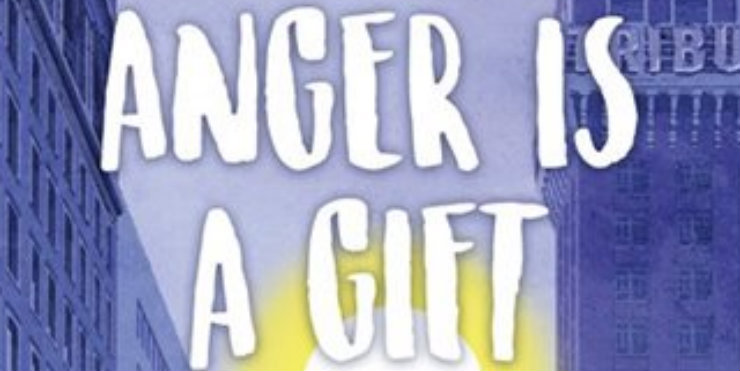 See Anger is a Gift in our catalogue

“Six years ago, Moss Jefferies’ father was murdered by an Oakland police officer. Along with losing a parent, the media’s vilification of his father and lack of accountability has left Moss with near crippling panic attacks.

“Now, in his sophomore year of high school, Moss and his fellow classmates find themselves increasingly treated like criminals by their own school. New rules. Random locker searches. Constant intimidation and Oakland Police Department stationed in their halls. Despite their youth, the students decide to organise and push back against the administration.

“When tensions hit a fever pitch and tragedy strikes, Moss must face a difficult choice: give in to fear and hate or realise that anger can actually be a gift.”

I don’t cry at books or films very often, but Anger is a Gift not only made me cry, it turned me into a blubbering mess, not once, but multiple times. Mark Oshiro writes in a descriptive, realistic and gorgeous way that pulls you in and won’t let go.

The book deals with some heavy topics in an honest and unrelenting way. Oshiro doesn’t hold back with the depictions of brutality, making you really feel as though you’re there.

The characters are casually diverse, nuanced and allowed to be flawed. They just jump off the page and become people that you feel like you’ve known your whole life. That’s part of why this book feels so raw.

This devastating, addictive and raw book just became an early contender for my favourites of 2019.