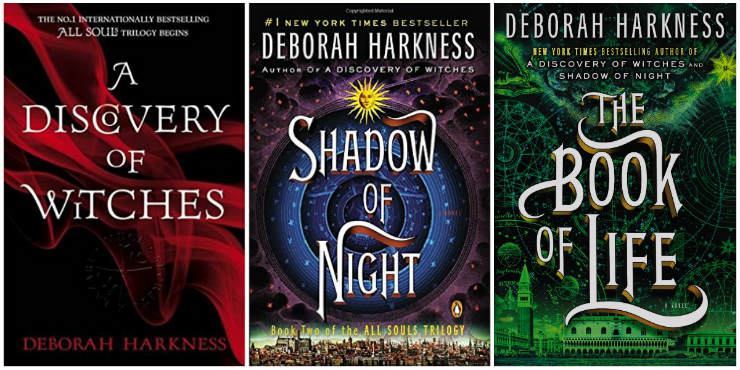 The descriptive and atmospheric All Souls trilogy is set around the Bodleian Library in Oxford and features its staff and members. Its author, Deborah Harkness, is a historian who published several non-fiction books before turning to fiction. These books held me spellbound.

A Discovery of Witches

When I first received this book as a Mother’s Day present from my daughter, my initial thought was ‘oh, witches in pointy black hats with warts on their noses’. I was pleasantly surprised, as the books could not be further from this traditional image.

A Discovery of Witches introduces us to four groups of people who simply have an extra chromosome that gives them certain abilities. The story starts off with an enchanted manuscript that holds and age-old secret being reserved from the stacks at the library.

As well as a supernatural love story that held me enthralled throughout all three books, we see the very different characters care about and squabble with each other as they learn to embrace and finally accept their differences to work together to fight an ancient evil.

The second book in the trilogy is set in London in 1590, where two of the modern-day characters have time-travelled for safety, and features Sir Walter Raleigh, Queen Elizabeth I, William Shakespeare and Kit Marlowe. I became very fond of these ‘new’ characters.

The edition I read included suggestions for discussion, which I think would be very useful for book clubs.

The Book of Life

The last book in the series, set in the present day again, is much darker than the previous two. There are lots of shocking twists and turns, characters change dramatically, and the story reaches a surprising conclusion. I never saw the end coming and I don’t want to spoil it for anyone!

Recommendation: if you’re reading one or all of the books as part of a group, make a mental note of which characters you find yourself liking and disliking. This should create a lively discussion.