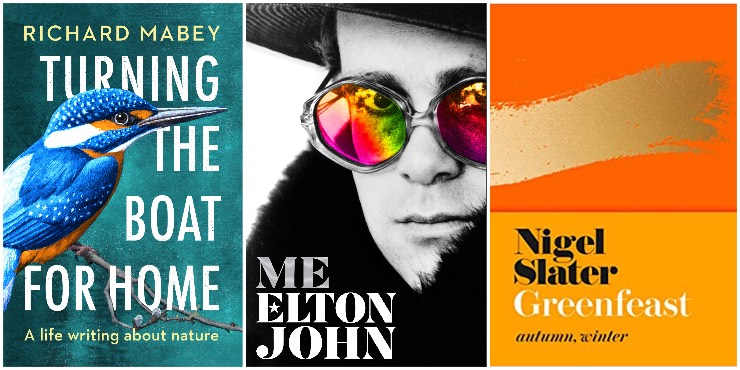 Twas the Nightshift before Christmas, by Adam Kay

More hilarious and heartbreaking tales from the author of This is Going to Hurt: secret diaries of a junior doctor, just in time for the Christmas market. We are expecting a lot of interest in this one.

Between the Stops, by Sandi Toksvig

Sandi Toksvig’s autobiography combines memoir, diary and travelogue - all from the top of a number 12 bus.

Face It, by Debbie Harry

“From gigging in CBGBs to headlining Glastonbury in 2014, Debbie Harry’s career has spanned nearly four decades and generated over 40 million record sales. Unafraid to speak her mind, she encapsulates a sense of independence, strength and sincerity that has inspired generations. Now Debbie recalls the experiences that have shaped her - the unprecedented triumphs and the darkest challenges - in her typically unapologetic, vibrant style.”

“Red Sister, Ching-ling, married Sun Yat-sen, founding father of the Chinese republic, and later became Mao’s vice-chair. Little Sister, May-ling, was Madame Chiang Kai-shek, first lady of the pre-Communist Nationalist China and a major political figure in her own right. Big Sister, Ei-ling, was Chiang’s unofficial main adviser. She made herself one of China’s richest women - and her husband Chiang’s prime minister.

“All three sisters enjoyed tremendous privilege and glory, but also endured constant attacks and mortal danger. They showed great courage and experienced passionate love, as well as despair and heartbreak. The relationship between them was highly charged emotionally, especially once they had embraced opposing political camps and Ching-ling dedicated herself to destroying her two sisters’ world. This is a gripping story of love, war, exile, intrigue, glamour and betrayal.”

How to Grow Old, by John Bishop

If you are a fan of comedian John Bishop you will know exactly what you are getting with his latest book. Follow up to How Did This All Happen?.

“Whether he likes it or not, John is getting older. His hair is greying, it’s getting that much harder to stay fit, and the potential to become something of an embarrassment is ever increasing. But hope is not lost.

“How to Grow Old is John’s offering to the world. With sage advice on how to avoid the common pitfalls of age, intimate confessions and spit-your-dentures-out hilarious commentary on his own advancing years, this is his observational comic writing at its very best. If you were concerned about how not to be boring or how to get rid of your should-be-old-enough-to-manage kids, this the book has the answers.”

The Body: a guide for occupants, by Bill Bryson

Still my choice of the funniest writer around. Bill Bryson’s latest book looks at the human body and how it works in his inimitable style.

“Bill Bryson achieved the seemingly impossible by making the science of our world both understandable and entertaining to millions of people around the globe. Now he turns his attention inwards to explore the human body, how it functions and its remarkable ability to heal itself. Full of extraordinary facts and astonishing stories this title is a brilliant, often very funny attempt to understand the miracle of our physical and neurological make up.”

Me, by Elton John

You know it is autumn when a new book from Nigel Slater appears.

“A vibrant and joyous collection of the food Nigel Slater eats at the end of the day. A collection of simply beautiful autumn and winter recipes, each with suggested variations, that can mostly be on the table in 30 minutes.”

Turning the Boat for Home: a life writing about nature, by Richard Mabey

“For five decades Richard Mabey has been a pioneering voice in modern nature writing. From the rediscovery of foraging that led to Food for Free, through his groundbreaking expeditions in the ‘edgelands’ in the 1970s, to his reflections on the musicality of bird-song, he has consistently explored new ways of thinking about nature and its relation to our lives.

“In Turning the Boat for Home, he introduces pieces from his rich writing life that reflect on how his ideas evolved. At the heart is a passionate belief that Earth is a commonwealth, of all species. Mabey recalls the fight against the commercial afforestation of the Scottish peatlands and recounts the experience of running a ‘community woodland’, one of the first in Britain.”

“Graham Sharpe’s life has been played out to a background of personally significant vinyl-related events, and his own large and ever-growing collection of LPs not only reflects his musical addiction, but also represents an intensely direct link to many of his key experiences. In this book, he considers all the elements of record collecting which he loves - and one or two he doesn’t - as he continues his long-term project to visit every surviving second hand record shop in his own and other countries, and reports on the many characters he has encountered, and the adventures he has accrued along the way.”