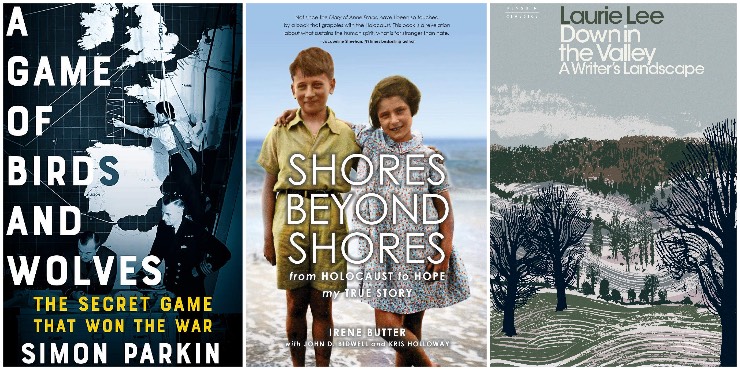 Time for Lights Out, by Raymond Briggs

“In his customary pose as the grumpiest of grumpy old men, Raymond Briggs contemplates old age and death - and doesn’t like them much. Illustrated with Briggs’s inimitable pencil drawings, Time for Lights Out is a collection of short pieces, some funny, some melancholy, some remembering his wife who died young, others about the joy of grandchildren, of walking the dog. He looks back at his schooldays and his time as an evacuee during the war, and remembers his parents and the house in which he grew up.”

A House in the Mountains: the women who liberated Italy from Fascism, by Caroline Moorehead

From the author of 2015 bestseller Village of Secrets: defying the Nazis in Vichy France.

“In the late summer of 1943, when Italy changed sides in the War and the Germans – now their enemies – occupied the north of the country, an Italian Resistance was born. Ada, Frida, Silvia and Bianca were four young Piedmontese women who joined the Resistance, living clandestinely in the mountains surrounding Turin. They were not alone. Between 1943 and 1945, as the Allies battled their way north, thousands of men and women throughout occupied Italy rose up and fought to liberate their country from the German invaders and their Fascist collaborators.

“The bloody civil war that ensued across the country pitted neighbour against neighbour, and brought out the best and worst in Italian society. The courage shown by the partisans was exemplary, and eventually bound them together as a coherent fighting force. The women’s contribution was invaluable – they fought, carried messages and weapons, provided safe houses, laid mines and took prisoners. Ada’s house deep in the mountains became a meeting place and refuge for many of them.

“The death rattle of Mussolini’s two decades of Fascist rule – with its corruption, greed and anti-Semitism was unrelentingly violent, but for the partisan women it was also a time of camaraderie and equality, pride and optimism. They had proved, to themselves and to the world, what resolve, tenacity and, above all, exceptional courage could achieve.”

“Irene’s childhood is cut short when she and her family are deported to Nazi-controlled prison camps and finally Bergen-Belsen, where she is a fellow prisoner with Anne Frank. Later forbidden from speaking about her experiences by the American relatives who cared for her, Irene is now making up for lost time. Irene has shared the stage with peacemakers such as the Dalai Lama, Desmond Tutu, and Elie Wiesel, and she considers it her duty to tell her story now and on behalf of the six million other Jews who have been permanently silenced.”

From Russia with Blood, by Heidi Blake

“Orwell Prize-nominated journalist Heidi Blake uncovers exclusive details of Vladimir Putin’s worldwide meddling with dissident voices. This is the explosive and true story of how Russia operates in our cities, right under the noses of the most powerful nations in the world, and why even they can’t stop him.”

Happiness and Tears: the Ken Dodd story, by Louis Barfe

The first in-depth biography of the comic who died in 2018.

“A definitive life one of the best-loved and most enduring figures of British comedy, the eccentric genius and national treasure Ken Dodd, whose seven-decade career straddled the end of the era of variety and the golden age of television comedy.”

A Game of Birds and Wolves: the secret game that won the war, by Simon Parkin

“It’s 1941. Imagine you’re Winston Churchill. The Battle of the Atlantic is a disaster. Supply ships ferrying vital weapons, food and fuel from North America are being torpedoed by the German U-boats. You are lying to the country about the number of ships sunk. You are lying about the number of men killed. Without the supply ships Britain will starve. The tide of the war is turning in Germany’s favour.

“This is the story of the game of battleships that won the Second World War. In 1941 Prime Minster Winston Churchill gathered a group of unlikely heroes - a retired naval captain and eight brilliant young women, the youngest only seventeen years-old - to form a secret strategy unit. On the top floor of a ramshackle HQ in Liverpool, the Western Approaches Tactical Unit spent day and night playing war games to crack the U-boat tactics.”

The Power in You: how to accept your past, live in the present and shape a positive future, by Henry Fraser

The inspirational young author of The Little Big Things, which has been read by many Suffolk book groups, returns with his new title.

“Combining his wisdom and insight, Henry Fraser shows you that the key to keeping a positive attitude - in the face of difficult and unexpected challenges - is to accept that seemingly negative experiences, such as failures, disappointments, mistakes and misfortunes, are actually the ultimate markers of human success.

“Sharing the lessons he learned after a freak accident left him paralysed from the neck down, Henry shows us that setbacks are inevitable in life but defeat is optional. He will encourage you to always search for a new perspective if what you see, at first, seems only dark, limiting or frightening. He believes there is always a reason to be grateful.”

The History of the SAS: as told by the men on the ground, by Chris Ryan

“Bestselling author and SAS veteran Chris Ryan uses his matchless network of contacts to give the soldiers’ accounts of missions in Malaya and Borneo, the Iranian Embassy Siege, Operation Certain Death in Sierra Leone, in the Falklands, Iraq and Afghanistan. There are also some first-hand accounts of hitherto unknown operations.”

The Man in the Red Coat, by Julian Barnes

“In the summer of 1885, three Frenchmen arrived in London for a few days’ shopping. One was a Prince, one was a Count, and the third was a commoner with an Italian name, who four years earlier had been the subject of one of John Singer Sargent’s greatest portraits.

“The three men’s lives play out against the backdrop of the Belle Epoque in Paris. The beautiful age of glamour and pleasure more often showed its ugly side: hysterical, narcissistic, decadent and violent, a time of rampant prejudice and blood-and-soil nativism, with more parallels to our own age than we might imagine.

“Our guide through this world is Samuel Pozzi, society doctor, pioneer gynaecologist, and free-thinker, a rational and scientific man with a famously complicated private life. The Man in the Red Coat is at once a fresh and original portrait of the French Belle Epoque and a life of a man ahead of his time.”

The Man in the Brown Suit: MI5, Edward VIII and an Irish assassin, by James Parris

“On 16 July 1936 a man in a brown suit stepped from the crowd on London’s Constitution Hill and pointed a loaded revolver at King Edward VIII. The monarch was moments from death. But MI5 and the Metropolitan Police Special Branch, tasked with royal protection, already knew all about this threat to the king’s life.

“The gunman, George McMahon, was a petty criminal with a history of involvement with the police in Glasgow and London. He was also an MI5 informant, providing valuable intelligence on Italian and possibly German espionage in Britain. McMahon had told his MI5 handler he was party to the conspiracy and had shown him the gun he always carried. The information was passed to MI5’s chief, Sir Vernon Kell, but nothing was done. Was the failure to act simply blundering on the part of the security services, or was something far more sinister involved?

“By the end of the year Edward had been forced to abdicate and live in exile, ostensibly because of his determination to marry the twice divorced American Wallis Simpson. Using evidence from MI5 and police files at the National Archives, this book reaches explosive conclusions about the British Establishment’s determination to remove Edward from the throne.”

“In recent years the vegan movement has gone from strength to strength as awareness of the ethical, environmental and health benefits of following a plant-based diet have steadily increased. Rose Elliot has been at the forefront of vegetarian and vegan food writing for over 35 years. Here, she gives readers a masterclass on vegan cookery, with over 200 recipes from basics including vegan milks, butters, cheeses and creams she continues with full recipes for breakfasts, soups, light meals and lunches and simple main courses. There are also recipes for special occasion dishes, side dishes, delicious desserts and foolproof dairy-free baked goods.”

Dishonesty is the Second-Best Policy and other rules to live by, by David Mitchell

“We’ve gone from UKIP surge to Brexit shambles, from horsemeat in lasagne to Donald Trump in the White House, from Woolworths going under to all the other shops going under. It’s probably socially irresponsible even to attempt to cheer up. But if you’re determined to give it a go, you might enjoy this eclectic collection (or eclection) of David Mitchell’s attempts to make light of all that darkness.

“Scampi, politics, the Olympics, terrorism, exercise, rude street names, inheritance tax, salad cream, proportional representation, and farts are all touched upon by Mitchell’s unremitting laser of chit-chat, as he negotiates a path between the commercialisation of Christmas and the true spirit of Halloween. Read this book and slightly change your life!”

Down in the Valley: a writer’s landscape, by Laurie Lee

Following the success of Village Christmas and other notes on the English year (2016), this is a never before published portrait of Laurie Lee’s Cotswold home in which he guides us through the landscape and shares memories of his village youth.

“Laurie Lee walked out of his childhood village one summer morning to travel the world, but he was always drawn back to his beloved Slad Valley, eventually returning to make it his home. In this portrait of his Cotswold home, Laurie Lee guides us through its landscapes, and shares memories of his village youth - from his favourite pub, The Woolpack, to winter skating on the pond, the church through the seasons, local legends, learning the violin and playing jazz records in the privy on a wind-up gramophone. Filled with wry humour and a love of place, Down in the Valley is a writer’s tribute to the landscape that shaped him, and where he found peace.”