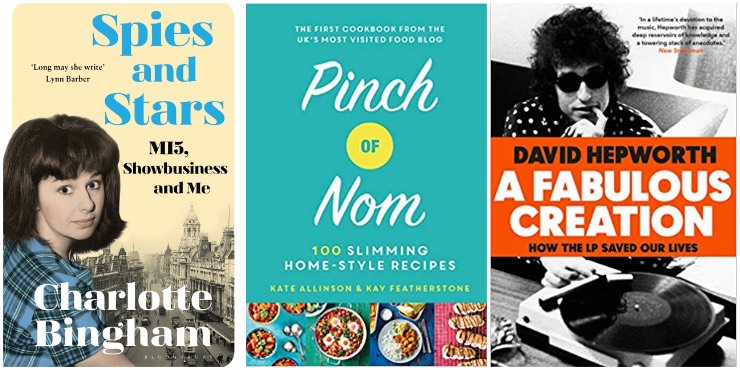 Happy Old Me: how to live a long life, and really enjoy it, by Hunter Davies

“On 8th February 2016, Margaret Forster lost her life to cancer of the spine. The days that followed for her husband, Hunter Davies, were carried out on autopilot: arrangements to be made, family and friends to be contacted. But how do you cope after you have lost your loved one? How do you carry on?

“As Hunter navigates what it means to be alone again after 55 years of marriage, coping with bereavement and being elderly, he shares his wisdom and lessons he has learnt living alone again. Revealing his emotional journey over the course of one year, as well as the often ignored practical implications of becoming widowed, he learns that, ultimately, bricks and mortar may change but the memories will remain.

“Happy Old Me is a fitting, heart-felt tribute to the love of his life and a surprisingly amusing and informative book about an age, and stage in life, which we might all reach someday.”

“An anonymous civil servant’s hilarious and horrifying account of government amid Brexit chaos. As Britain jigs daily between political crisis and constitutional meltdown, it’s high time we understood what really goes on behind closed doors, from the corridors of Whitehall to the EU negotiating table.

“The Secret Civil Servant will reveal how Brexit unfolded behind the scenes, from the panic triggered by the EU referendum result in June 2016 to the last-gasp efforts to secure a deal in 2018. It will be a unique insight into the organisation we entrust to enact the will of the British people, exploring the role civil servants have to play in running the country, how decisions made in SW1 have significant consequences for everyone and what Brexit revealed about the cracks in the system.”

The chefs behind the UK’s most popular food blog with a community of 1.5 m users publish their first book. Cookery books and slimming books in particular are always popular and we expect this one to take off.

Spies and Stars: MI5, showbusiness and me, by Charlotte Bingham

If you read Charlotte Bingham’s MI5 and Me, you are probably eagerly waiting for the sequel. The BBC are said to be interested in making a series.

“London in the 1950s. Lottie is a reluctant typist at MI5 and the even more reluctant daughter of the organisation’s most illustrious spy. Now she has had the bad luck to fall in love with Harry, a handsome if frustrated young actor, who has also been press-ganged into the family business, acting as one of her father’s undercover agents in the Communist hotbed of British theatre.

“Together the two young lovers embark on a star-studded adventure through the glittering world of theatre - but, between missing files, disapproving parents, and their own burgeoning creative endeavours, life is about to become very complicated indeed.”

I Talk Too Much: my autobiography, by Francis Rossi

“In Francis Rossi’s explosive new memoir, I Talk Too Much, the Status Quo main man reveals the true-life stories behind the life and times of one of the bestselling rock singers in the world.

“With over 100 million records sold worldwide in a career that mirrors the evolution of rock music, from the flower power sixties, with hits like Pictures Of Matchstick Men, through the denim-clad seventies and classic Quo-tastic anthems such as Down Down, Rocking All Over The World and Whatever You Want, through the turbulent eighties, when they famously opened Live Aid (‘Quo and Queen are probably the only two acts everybody remembers from that,’ said Bob Geldof), through break-ups, make-ups, and a total of 65 hit singles and 32 hit albums, up to the tragic death of Rossi’s partner Rick Parfitt in December 2016.”

Till the Cows Come Home: a Lancashire childhood, by Sara Cox

Coming-of-age memoir from the BBC Radio 2 presenter, who looks back on her life on a Lancashire farm.

“The youngest of five siblings, Sara Cox grew up on her father’s cattle farm surrounded by dogs, cows, horses, fields and ‘lots of cack’. The lanky kid sister - half girl, half forehead - a nuisance to the older kids, the farm was her very own dangerous adventure playground, ‘a Bolton version of Narnia’. Her writing conjures up a time of wagon rides and haymaking and agricultural shows, alongside chain smoking pensioners, cabaret nights at the Conservative club and benign parenting.

“This funny, big-hearted and often moving telling of Sara’s upbringing is not what you’d expect from the original ‘ladette’, and one of radio’s most enduring and well-loved presenters.”

Still Water: the deep life of the pond, by John Lewis-Stempel

The author of the Wainwright Prize winning Meadowland: the private life of an English field returns with a year in the life of a farm pond.

“The pond. Nothing in the countryside is more humble or more valuable. It’s the moorhen’s reedy home, the frog’s ancient breeding place, the kill zone of the beautiful dragonfly. More than a hundred rare and threatened fauna and flora depend on it.

“Written in gorgeous prose, Still Water tells the seasonal story of the wild animals and plants that live in and around the pond, from the mayfly larvae in the mud to the patrolling bats in the night sky above.”

A Fabulous Creation: how LPs saved our lives, by David Hepworth

“The era of the LP began in 1967, with Sgt Pepper; The Beatles didn’t just collect together a bunch of songs, they Made An Album. Henceforth, everybody else wanted to Make An Album. The end came only fifteen years later, coinciding with the release of Michael Jackson’s Thriller. By then the Walkman had taken music out of the home and into the streets and the record business had begun trying to reverse-engineer the creative process in order to make big money. Nobody would play music or listen to it in quite the same way ever again.

“It was a short but transformative time. Musicians became ‘artists’ and we, the people, patrons of the arts. This is the story of that time; it takes us from recording studios where musicians were doing things that had never been done before to the sparsely furnished apartments where their efforts would be received like visitations from a higher power.”