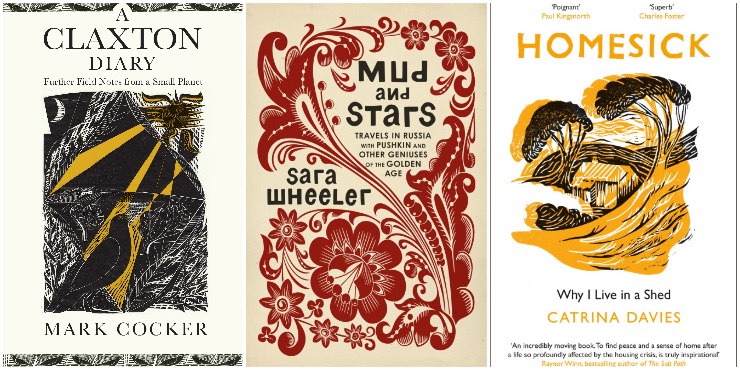 “On Chapel Sands is a book of mystery and memoir.”

Headlines and Hedgerows, by John Craven

“In this funny, moving and unique first memoir, John recounts his childhood, the high points and low points of one of the longest entertaining careers in history, and the people, family and animals in his own life which have shaped it.

“Throughout the 1970s and 1980s, John was, to children and parents alike, a friendly guide to the big wide world. And then, for a new audience, in 1989 John presented the first episode of Countryfile - a show that he’s now presented for almost three decades.”

A Claxton Diary: further field notes from a small planet, by Mark Cocker

“For seventeen years, as part of his daily writerly routine, the author and naturalist Mark Cocker has taken a two-mile walk down to the river from his cottage on the edge of the Norfolk Broads National Park. Over the course of those 10,000 daily paces he has learnt the art of patience to observe a butterfly, a bird, flower, bee, deer, otter or fly and to take pleasure in all the other inhabitants of his parish, no matter how seemingly insignificant. In turn these encounters have then been converted into literary epiphanies that are now a widely celebrated part of his work.”

“The Fens is Britain’s most distinctive, complex, man-made and least understood landscape. Francis Pryor has lived in, excavated, farmed, walked - and loved - the Fen Country for more than 40 years: its levels and drains, its soaring churches and magnificent medieval buildings.

“In The Fens, he counterpoints the history of the Fenland landscape and its transformation - the great drainage projects that created the Old and New Bedford Rivers, the Ouse Washes and Bedford Levels, the rise of prosperous towns and cities, such as King’s Lynn, Cambridge, Peterborough, Boston and Lincoln - with the story of his own discovery of it as an archaeologist.”

Homesick: why I live in a shed, by Catrina Davies

“The story of a personal housing crisis that led to a discovery of the true value of home.

“Aged 31, Catrina Davies was renting a box-room in a house in Bristol, which she shared with four other adults and a child. Working several jobs and never knowing if she could make the rent, she felt like she was breaking apart. Homesick for the landscape of her childhood, in the far west of Cornwall, Catrina decides to give up the box-room and face her demons. As a child, she saw her family and their security torn apart; now, she resolves to make a tiny, dilapidated shed a home of her own.

“With the freedom to write, surf and make music, Catrina rebuilds the shed and, piece by piece, her own sense of self. On the border of civilisation and wilderness, between the woods and the sea, she discovers the true value of home, while trying to find her place in a fragile natural world.”

“Three Women is a record of unmet needs, unspoken thoughts, disappointments, hopes and unrelenting obsessions that tests the boundaries of non-fiction.”

Mud and Stars: travels in Russia with Pushkin and other geniuses of the Golden Age, by Sara Wheeler

“With the writers of the Golden Age as her guides - Pushkin, Tolstoy, Gogol and Turgenev, among others - Wheeler travels across eight time zones, from rinsed north-western beetroot fields and far-eastern Arctic tundra to the cauldron of ethnic soup that is the Caucasus. She follows 19th-century footsteps to make connections between then and now: between the places where flashing-epauletted Lermontov died in the aromatic air of Pyatigorsk, and sheaves of corn still stand like soldiers on a blazing afternoon, just like in Gogol’s stories.”

An extraordinary book about children’s experiences in the USSR during the Second World War. Aleksievich was the Nobel Laureate for 2015 and her book is available in English for the first time.

“What did it mean to grow up in the Soviet Union during the Second World War? In the late 1970s, Svetlana Alexievich started interviewing people who had experienced war as children, the generation that survived and had to live with the trauma that would forever change the course of the Russian nation. With remarkable care and empathy, Alexievich gives voice to those whose stories are lost in the official narratives, uncovering a powerful, hidden history of one of the most important events of the twentieth century.”

Pam the Jam: the book of preserves, by Pam Corbin

I know very little about jams and jellies, but Pam Corbin is the expert’s expert in this field who has written two books in the River Cottage series on the subject.

“Pam Corbin is the expert who professional cooks consult when they want to make jams, jellies, marmalades, chutneys, pickles or anything else to do with preserving. They know her as ‘Pam the Jam’, and this book is the culmination of her years of experience, distilled into more than 100 tried-and-tested recipes.

“Her jams, marmalades and fruit spreads contain far less sugar than traditional recipes, which means that they taste astonishingly fruity and delicious. Likewise, her chutneys and pickles are lighter and sprightlier than the old-fashioned kind. Pam will show you how to make more unusual preserves too - such as glossy fruit cheeses to serve with everything from Stilton to manchego (which calls for her classic quince membrillo). Or creamy yet zesty fruit curd: there’s a recipe for classic lemon curd, and also a wonderfully light lime and coconut one.”