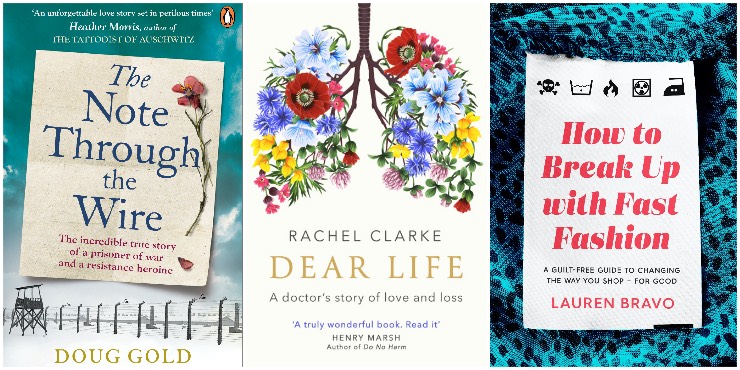 Dear Life: a doctor’s story of love and loss, by Rachel Clarke

“As a specialist in palliative medicine, Dr Rachel Clarke chooses to inhabit a place many people would find too tragic to contemplate. Every day she tries to bring care and comfort to those reaching the end of their lives and to help make dying more bearable.

“Rachel’s training was put to the test in 2017 when her GP father was diagnosed with terminal cancer. She learned that nothing - even the best palliative care - can sugar-coat the pain of losing someone you love. And yet, she argues, in a hospice there is more of what matters in life - more love, more strength, more kindness, more joy, more tenderness, more grace, more compassion - than you could ever imagine.

“For if there is a difference between people who know they are dying and the rest of us, it is simply this: that the terminally ill know their time is running out, while we live as though we have all the time in the world.”

Motherwell: a girlhood, by Deborah Orr

Memoir from the late journalist, who died in October 2019.

“Just shy of 18, Deborah Orr left Motherwell - the town she both loved and hated - to go to university. It was a decision her mother railed against from the moment the idea was raised. Win had very little agency in the world, every choice was determined by the men in her life. And strangely, she wanted the same for her daughter. Attending university wasn’t for the likes of the Orr family. Worse still, it would mean leaving Win behind - and Win wanted Deborah with her at all times, rather like she wanted her arm with her at all times.

“But while she managed to escape, Deborah’s severing from her family was only superficial. She continued to travel back to Motherwell, fantasising about the day that Win might come to accept her as good enough. Though of course it was never meant to be.”

How to Break Up with Fast Fashion: a guilt-free guide to changing the way you shop - for good, by Lauren Bravo

“You probably know the statistics: global clothing production has roughly doubled in just 15 years, and every year an estimated 300,000 tonnes of used clothing ends up in UK landfill. Fast fashion is the ultimate toxic relationship. It’s bad news for the planet, our brains and our bank balances. We can’t go on like this; our shopping habits need an overhaul.

“Journalist Lauren Bravo loves clothes more than anything, but she’s called time on her affair with fast fashion in search of a slower, saner way of dressing. In this book, she’ll help you do the same. How To Break Up With Fast Fashion will help you to change your mindset, fall back in love with your wardrobe and embrace more sustainable ways of shopping - from the clothes swap to the charity shop.”

Wild Game: my mother, her lover and me, by Adrienne Brodeur

“On a hot August night on Cape Cod, when Adrienne was 14, her mother Malabar woke her at midnight with five simple words that would set the course of both of their lives for years to come: Ben Souther just kissed me.

“Adrienne instantly became her mother’s confidante and helpmate, blossoming in the sudden light of her attention; from then on, Malabar came to rely on her daughter to help orchestrate what would become an epic affair with her husband’s closest friend.

“The affair would have calamitous consequences for everyone involved, impacting Adrienne’s life in profound ways, driving her into a doomed marriage of her own, and then into a deep depression. Only years later will she find the strength to embrace her life - and her mother - on her own terms.”

The Note Through the Wire: the unforgettable true love story of a WW2 prisoner of war and a resistance heroine, by Doug Gold

“In the heart of Nazi-occupied Europe, two people meet fleetingly in a chance encounter. One is an underground resistance fighter; the other a prisoner of war. A crumpled note passes between these two strangers and sets them on a course that will change their lives forever.

“The Note Through the Wire is the true story of Josefine Lobnik, a resistance heroine, and Bruce Murray, an imprisoned soldier, as they discover love in the midst of a brutal war. Woven through their story of great bravery, daring escapes, betrayal, torture and retaliation is their remarkable love that survived against all odds.”

“Eddy de Wind, a Dutch doctor and psychiatrist, was shipped to Auschwitz with his wife Friedel, whom he had met and married at the Westerbork labour camp in the Netherlands. At Auschwitz, they made it through the brutal selection process and were put to work. Each day, each hour became a battle for survival. For Friedel, it meant avoiding the Nazis’ barbaric medical experiments.

“Despite such daily stresses, love prevailed. Passing notes through the fence, sometimes stealing a brief embrace, Friedel and Eddy clung to life. As the end of the war approached and the Russian Army drew closer, the last Nazis fled, taking many prisoners with them, including Friedel. Eddy hid under a pile of old clothes and stayed behind.

“This book is an extraordinary account of life as a prisoner, a near real-time record of the daily struggle to survive.”

Twochubbycubs - the Cookbook: slimming recipes to leave you satisfied and smiling!, by James & Paul Anderson

“The debut cookbook from the Twochubbycubs (aka James and Paul Anderson) - inspired by their slimming blog loved by thousands! This cookbook is a fabulous and funny collection of 100 never-before-seen recipes that both meat-eaters and veggies will love - from a ‘cheesy hash brown rosti’ for breakfast through to a ‘totally-not-KFC-style’ fakeaway dinner and everything in-between - with prep boxes for the weekend, plus some ‘healthy-ish’ indulgences for special occasions to get the taste buds watering.

“James and Paul’s hugely successful ‘Twochubbycubs’ blog has become a go-to resource for healthy eating without sparing on taste (and good humour) and over the last year they have shed over 18 stone between them, as unveiled on ITV’s This Time Next Year. This is the true, honest home-cooked food that helped them to drop the weight whilst never feeling hungry or hard done by.”

“Channel the magic of the Harry Potter films from the screen to your needles with the ultimate knitter’s guide to the Wizarding World. Featuring over 25 magical knits, the book includes patterns for clothing, home projects and keepsakes pulled straight from the movies - and even includes a few iconic costume pieces as seen on-screen. With yarn suggestions based on the true colours used in the films, projects ranging from simple patterns like the Hogwarts house scarves to more complex projects like Mrs Weasley’s Christmas sweater, knit your own wizarding world.”

The Whitlock Workout: get fit and healthy in minutes, by Max Whitlock

“Max Whitlock, Team GB’s double Olympic gold-medallist, has spent years developing his own fitness regime. Whilst other sportsmen and women spend hours and hours in the gym, he has always focused on his core strength, employing workouts he can do anywhere, simply using his own body weight.

“Now, The Whitlock Workout gathers together all of Max’s user-friendly exercises and quick workout routines that anybody can try, from simple stretches on your sofa, to those using just a cushion or a pillow, through to more advanced total body exercises which can be taken outside to your local park.”

The Crew: the story of a Lancaster Bomber crew, by David Price

“The Crew recounts the intimate, personal testimonies to the author of Wing Commander Ken Cook who served as Bomb Aimer with the Comans crew. It specifically follows Flying Officer Jim Comans and his crewmen from their enlistment as volunteers, through training and into operational service. The Comans crew flew forty-five hazardous bombing missions - mostly deep into Germany at night - through the winter of 1943 to the summer of 1944.

“At ninety-five Ken Cook is the crew’s last survivor. Enlisting in RAF Bomber Command at nineteen his extraordinary story brings a moving insight into the bombing campaign. His experiences, particularly during the Battle of Berlin, highlight the extreme danger each bomber crew faced.”

“Find your route to a more sustainable lifestyle with Dick Strawbridge, of Channel 4’s Escape to the Chateau, and his son James. Wherever you live - be it a small terraced house like James or a rural smallholding - this new edition of Practical Self Sufficiency contains invaluable advice to help you make the most of your own resources and become more eco-friendly. You may simply want to embrace zero-waste, grow your own veg, or make small changes that can help the planet, or perhaps you are ready to explore off-grid living and a fully self-sufficient life.

“A comprehensive guide to modern sustainability, the book covers everything from how to conserve energy in the home, keep bees, and grow crops in an urban garden to recipes for smoking your own meat and fish, creating your own oat milk, and preparing your own greener cleaning products.”