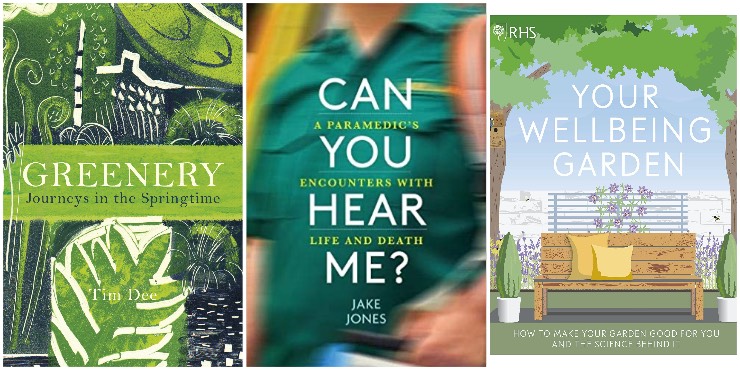 A Delayed Life: the true story of the librarian of Auschwitz, by Dita Kraus

“The powerful, heart-breaking memoir of Dita Kraus, the real-life Librarian of Auschwitz. Born in Prague to a Jewish family in 1929, Dita Kraus has lived through the most turbulent decades of the 20th and early 21st centuries. Here, Dita writes with startling clarity on the horrors and joys of a life delayed by the Holocaust.

“From her earliest memories and childhood friendships in Prague before the war, to the Nazi-occupation that saw her and her family sent to the Jewish ghetto at Terezín, to the unimaginable fear and bravery of her imprisonment in Auschwitz and Bergen-Belsen, and life after liberation. Dita writes unflinchingly about the harsh conditions of the camps and her role as librarian of the precious books that her fellow prisoners managed to smuggle past the guards. But she also looks beyond the Holocaust - to the life she rebuilt after the war.”

What Makes Us Stronger, by Freya Lewis

“Freya Lewis was just three metres away from the terrorist who detonated the bomb at the Manchester arena on the night of 22nd May 2017. Her best friend Nell, who she’d been linking arms with at the time, was tragically killed, but Freya - thrown forward by the blast - somehow survived. She suffered 29 separate injuries, was in a coma for five days, in a wheelchair for three months and there wasn’t a part of her body that didn’t suffer the effects of shrapnel.

“Yet 70 hours of surgery and just 12 months later, she was on her feet, running the Junior Great Manchester Run and raising £60,000 for the hospital that saved her. Freya is now 16 and wants to tell her story - a story of the amazing emergency services and doctors who saved her life, and of how the attack has changed her.”

Greenery: journeys in the springtime, by Tim Dee

“Greenery begins in a midsummer in the middle of a winter. One December, in midsummer South Africa, Tim Dee watched swallows and those birds set him off on a journey in pursuit of the spring as it moves north, bringing swallows and all the other spring migrant birds out of Africa and into Europe.”

Can You Hear Me? A paramedic’s encounters with life and death, by Jake Jones

“A young man has stopped breathing in a supermarket toilet. A pedestrian with a nasty head injury won’t let the crew near him on a busy road. A newborn baby is worryingly silent. An addict urinates on the ambulance floor when denied a fix. This is the life of an ambulance paramedic.

“Jake Jones has worked in the UK ambulance service for ten years: every day, he sees a dozen of the scenes we hope to see only once in a lifetime. Can You Hear Me? - the first thing he says when he arrives on the scene - is a memoir of the chaos, intensity and occasional beauty of life on the front-lines of medicine in the UK.”

One of Them: from Albert Square to Parliament Square, by Michael Cashman

“Michael Cashman has lived many lives, all of them remarkable: as a beloved actor of stage and screen; as a campaigner for gay rights; as an MEP and as a life peer.

“Born in the post-war East End of London, young Michael’s life is changed when he is spotted in a school play, cast in Lionel Bart’s Oliver! and is transported to the glittering West End. Acting on stage and screen into adulthood, he finds his most defining role as Colin in Eastenders, making television history as one half of the first gay kiss ever broadcast on a British soap. But it is a chance encounter in a Butlins resort that leads Michael to the great love of his life: Paul Cottingham, who would become his husband and partner of 31 years.

“We follow Michael’s second act, as with Ian McKellen he founds and chairs Stonewall, fighting tirelessly for civil liberties all over the world before entering the world of politics.”

A Bit of a Stretch: the secret diaries of a prisoner, by Chris Atkins

“Where can a tin of tuna buy you clean clothes? Which British education system struggles with 50% illiteracy? Where do teetotal Muslims attend AA meetings? Where is it easier to get ‘spice’ than paracetamol? Where does self-harm barely raise an eyebrow? Welcome to Her Majesty’s Prison Service, a creaking and surreal world that has been left to rot for decades in the shadows of polite society.

“Like most people, documentary-maker Chris Atkins didn’t spend much time thinking about prisons. But after becoming embroiled in a dodgy scheme to fund his latest film, he was sent down for five years. His new home would be HMP Wandsworth, one of the oldest, largest and most dysfunctional prisons in Europe. Horrifying, moving and darkly funny, this is the unvarnished depiction of what he found.”

Your Wellbeing Garden: how to make your garden good for you - science, design, practice, by Alastair Griffiths & Matt Keightley

“Gardens can enhance your wellbeing, but why? Covering design, plants, and the act of gardening, this book uniquely explains why green spaces are good for you and shows how to use that knowledge to optimise your outdoor space.

“The plants you grow and your garden layout can induce relaxation, boost your cardio system, and enhance mood. A well-planned space will neutralise pollution, mask noise, and reduce household energy and water consumption. And gardening itself can improve flexibility and fitness, counteract nature deficiency order, and promote happiness.