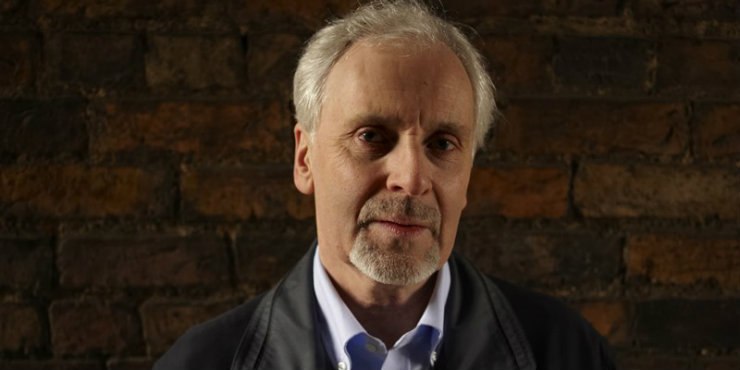 Stephen Booth is a UK crime novelist and creator of the Cooper and Fry crime fiction mystery series, set in England’s Peak District. Stephen’s books are very popular in Suffolk libraries and can be found on our catalogue. His latest title, Fall Down Dead, is a murder mystery set on Kinder Scout.

We had very few books in the house when I was growing up, so I relied on my local library and read pretty much everything I could get my hands on there.

I was a huge science fiction fan in my early teens, and those books really expanded my imagination, because they were constantly asking the ‘what if’ questions and exploring how human beings might cope with extraordinary circumstances. John Wyndham was one of my favourite authors.

But my reading tastes developed very quickly at an early age, and I went rapidly through English and American literature until I discovered the attractions of crime fiction, thanks to Agatha Christie and Sir Arthur Conan Doyle.

2. How did the characters of Ben Cooper and Diane Fry emerge, and were they based on anyone?

They were actually a reaction to what I was reading at the time. In the 1990s, every series of crime novels seemed to feature a world-weary, middle-aged alcoholic loner, always a man and at least detective inspector rank. I decided to make my characters young and junior, so Ben Cooper and Diane Fry are in their 20s in the first book and lowly detective constables.

I also wanted one of them to be local - that’s Ben, who’s from a farming family and grew up in the Peak District - and the other an outsider from the city - Diane is from Birmingham and very much out of her element in the countryside. This gave me two very different pairs of eyes to explore the Peak District setting.

Everything else about those two characters emerged as I was writing the first book, Black Dog, so I discovered who they were as I went along. Of course, it’s inevitable that they both have a bit of me in them.

3. What is it about the Peak District that draws you as a location for your books?

I wanted to break down the expectations that a crime novel set in a village or rural area would be ‘cosy’ in nature. The Peak District was perfect because it has so many wonderfully atmospheric locations, but also thousands of years of history, folklore and mythology. It’s a beautiful area, but I can always sense a darkness lurking just under the surface. When a murder happens in an area like that, the reasons for it can be very complex and go back for generations.

Also, as a national park surrounded by cities, the Peak District attracts millions of visitors every year, which creates inherent conflicts and pressures for me to write about. I’m interested in the relationship between city and countryside, and there’s nowhere better to bring it into focus.

4. Can you give us a taste of what reader can expect from your latest title, Fall Down Dead?

The new Cooper and Fry novel is set around the Peak District’s most iconic location - Kinder Scout. The story recalls the famous Kinder Mass Trespass of 1932, an act of civil disobedience which opened up public access to the countryside and led to the creation of our first national parks. The Kinder plateau is a strange, alien landscape, and it can be very dangerous.

In Fall Down Dead, a group of walkers head onto the mountain poorly prepared. When the fog comes down they get completely lost - and one of the walkers doesn’t make it back down alive. Was it an accident or murder? That’s the mystery Ben Cooper and his team have to investigate.

I love the idea of a limited number of suspects and very little in the way of forensic evidence. It all revolves around the characters and the relationships between them.

5. Your books were recently described as ‘rural noir’. Is that a description you are comfortable with?

I don’t think they’re ‘noir’ in the strict definition. The Cooper and Fry novels contain much more light and shade than that, with plenty of hope and redemption. But ‘noir’ is used as a convenient shorthand for crime fiction in general these days, and I’ve accepted that as a wider definition.

Of course, there’s quite a bit of darkness in the depiction of rural life. Sherlock Holmes once explained to Dr Watson that: “There’s more evil in the smiling and beautiful countryside than in the vilest alleys of London.” That’s what I’m writing about.

When I was very young, I remember discovering a copy of George Eliot’s Silas Marner buried at the bottom of a wardrobe at home. It was the first adult novel I’d come across. It created one of the ‘light bulb’ moments that you get in life occasionally, and made me realise there were whole fictional worlds waiting for me to discover as a reader. That book sent me to the library for more and more books, and turned me into an avid reader for life.

I’m immensely grateful to all the library users who keep discovering and reading my books. Readers are the most important people in the world, after all. I hope the Cooper and Fry novels have brought enjoyment to them over the years.

I bred livestock for many years (dairy goats being my specialty), and perhaps my most unusual role was as a director of an artificial insemination company. We had professional staff to do the technical side of the job, though!