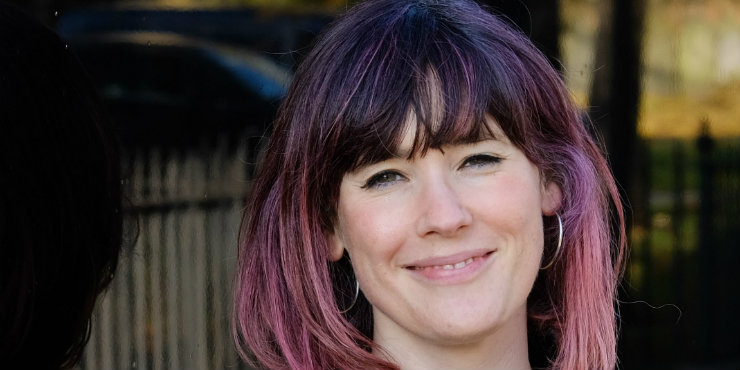 Sophie Green is a Suffolk based author and librarian who writes children’s fiction and short stories. Her first novel, The Last Giant, was shortlisted for the Times/Chicken House Children’s Fiction Competition in 2011 and her second, Potkin and Stubbs, was published in March 2019.

I didn’t start writing, or even think about being an author, until I was in my twenties, but when I was younger I did really want to be Indiana Jones – I even got hold of a brown hat. I read and re-read a lot of Roald Dahl when I was growing up and then Sue Townsend later.

My hero was probably S.E. Hinton; The Outsiders was the first book I fell properly in love with, we all did back then, I think we must have read it at school. They had made a great Brat Pack film out of it in the 1980s but the book was better. I read it again recently and it’s still brilliant.

2. Did you base any of the characters on people you know?

Not intentionally, but I named Lil Potkin after my Grandma Lil who was also tenacious, crafty and brave. Abe Mandrel was based on what I imagine the old hardboiled detectives of the 1930s would have been like twenty years on if they carried on drinking and getting obsessed with solving cases.

3. When I was reading Potkin and Stubbs, I felt it had a visual film like quality to it. Was this a conscious decision?

It wasn’t a choice, but it is how I see stories. I watch them play out in my head like films, but then not only do I love watching all sorts of films and going to the cinema, but also much of what I have learned about storytelling has come from courses and workshops on writing for the screen. Plus, the inspiration for Potkin and Stubbs came from film noir, so the story had a naturally filmic quality which suits me.

4. Peligan City is full of fascinating characters. Will we be meeting some of them in future books?

Yes indeed, there are two more books to come and almost all of the characters that appear in book one are reoccurring, the ones that make it to the end at least.

5. Can we ask what you are working on at the moment?

I’m editing the second book and writing the first draft of the third. As I’m promoting the first book now as well, it is a recipe for getting in a muddle, but it also helps to keep the story in my head. I am always worried, though, that I’ll disclose some secret plot twist from book three while I’m talking about book one!

More books than I can read in several years – I have three piles and they never get any smaller, but currently in my ‘crime’ pile is Bedelia, by Vera Caspary, in the children’s pile I have The House with a Clock in its Walls, by John Bellairs and in my ‘general’ pile I have Ragtime, by E.L. Doctorow.

7. Has a book ever changed your life or made you think differently?

Every good book I’ve ever read has changed me and the way I think in some way, but the two most pivotal have been Wonder Boys, by Michael Chabon – which, strangely, made me really want to be a writer as a profession - and Mortal Engines, by Philip Reeve which made me want to write for children in particular.

8. Do you have a message for your readers in Suffolk Libraries?

As a writer, I would say thank you for reading Potkin and Stubbs because a story doesn’t really come to life until someone reads it.

As a librarian: please keep supporting your libraries, keep using them, fighting for them, and keep taking your children to them because libraries are amazing places. As Eric Klinenberg said (in his book about libraries, Palaces for the People), communities are full of children whose future ‘will be formed in the places where they go to learn about themselves and the world they’ll inherit. They deserve palaces. Whether they get them is up to us.’