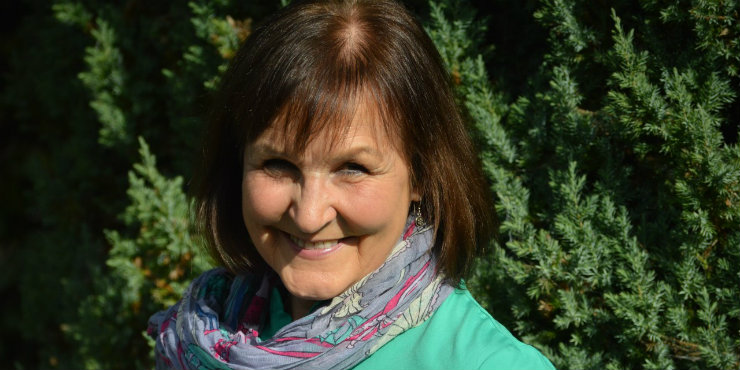 Shirley Mann is a former journalist and media and PR consultant who now writes fiction full-time. Her first novel, Lily’s War, is published by Zaffre on 23 January 2020, and is available to reserve from the library, or to buy as a paperback or eBook for £7.99.

I trained to become a journalist first and then, at 25, I decided I had missed out so went to do English and French at Liverpool University. They told me to read five books a week in each language and I curled up and thanked the heavens! What a privilege and one I certainly wouldn’t have appreciated at the age of 18.

I loved the literary classics - Dickens, Austen, Zola, Stendhal, Flaubert - but when I was younger, my reading under the bedclothes books were often Georgette Heyer. In my early twenties, I went through a feminist books phase and also a political one led by Orwell, Harper Lee and Gide.

I’ve always loved reading but sometimes long for an intelligent yet absorbing read, like Thornbirds by Coleen McCulloch. With modern novels, I often get to the last page and think… And?? I hate that.

2. What was life like before you became a writer?

Busy! I don’t think I could have become an author until I got some headspace in my life. I was a journalist and worked across newspapers, then radio, then TV. I left the BBC to set up my own media company and did environmental PR, media and communication workshops and made promotional films for environmental organisations, and that became busier than I perhaps intended. I also have two daughters who have a job a minute for us!

So it was only in my 60s that I could take a step back to think about a novel. I didn’t find it easy and had to go on loads of courses and make lots of mistakes and endless drafts before I had anything vaguely resembling a novel.

But actually, you ask about life before being a writer - I’m not sure there ever was a time when I didn’t write. I’ve got cases under beds, backs of wardrobes and now files galore on the computer full of scribblings. Writing is not a choice with me, it’s an addiction.

3. Your new book, Lily’s War, is inspired by your mother’s life in the WAAF. Is this a subject you had in mind to write about for some time?

I suppose so, unconsciously, but it was only in the last few years of her life that I started to make any notes. The last few years were tough, for her and for us, and when she died I really needed to rediscover the woman who had embraced life with enthusiasm.

I was volunteering at an old people’s home at the time and it struck me that behind every Zimmer frame, there is a vibrant young person who danced, loved and had a twinkle in their eye. I decided I wanted to recreate those young people in my parents and in the elderly WAAFs I interviewed. It became really important to me to do justice to their legacy.

4. Some of the situations in the book are quite uncompromising. Was it a conscious decision to make the story as authentic as possible?

Yes, absolutely, this is a book set in wartime when people suffered and yes, they died too. These young people grabbed whatever fun and happiness they could find, but they were living through extraordinary times, and when I compare their lives with the lives of generations since, I think we should all feel amazingly lucky. I wanted to help people to realise what the minutiae of everyday life was like - food shortages, hardly any make-up or clothes, very little heating, alongside facing being obliterated at any second.

I felt a huge responsibility not to sprinkle saccharine on what was a tough time but I was also struck by the fact that, for many of these women, it was a chance for them to shine. They escaped the expectations of society and suddenly found they were far more capable than anyone, including themselves, had believed possible.

5. Can you tell us anything about your latest project?

The next book is about an ATA pilot, one of the women who delivered planes all over the country. I was lucky enough to get an interview with ATA pilot Mary Ellis before she died and that was an amazing and humbling experience for me. To meet a woman who had flown Spitfires and huge Wellingtons made me stop moaning about the paltry challenge of writing a novel.

I felt liberated with this one because, firstly, someone had told me I could write and, secondly, that I could make it up! I wrote it very quickly to convince myself that I could actually do a second novel and now I’m really struggling to refine it and get it right, ready for publication. It doesn’t seem to get any easier but I’m really excited about bringing a story that I hope represents these amazing women to a new audience. I really hope it will also inspire young women to discover that there are no limits to the horizon.

I love books that tell me about another time or other countries’ history such as Wild Swans, by Jung Chang, War and Peace, by Leo Tolstoy, Shogun, by James Clavell and Germinal, by Émile Zola. I like a book that takes me to another world, another country or into another experience, so books like Kristin Hannah’s The Nightingale allowed me find out what it was like to be in France during the Occupation and to understand history.

I like to be challenged with a book but I want it to be a page-turner and one that has changed my life is Lord of The Rings, by J. R. R. Tolkien. It was a most wonderful book of adventure, legend, heroism and self-sacrifice and I read during the last holiday I had with my parents as a teenager and I think I was incredibly boring because I hardly looked up for a fortnight! It made me fall in love with the written word.

I think it’s great that Suffolk has a community of people who visit its libraries. I love my library in Wirksworth, Derbyshire, and particularly the fact that Mark, the librarian, calls me by my name. As a child, I visited the library every week and came out with four books to read, that helped develop my love of books. I hope they’re still around in the future but I suppose that depends on us all using them regularly.

I also want to thank Suffolk library readers for taking the time to read this and maybe Lily’s War as well. I can’t tell you the thrill it gives me that there may be people around the country who are sharing Lily’s - and my - journey.

8. Can you share one thing about yourself that your readers may not know?

I’m an excellent labourer. My husband and I have renovated three properties and I have been faithfully standing by his side, giving ‘expert’ advice throughout. However, I am going to have on my gravestone: “Just get the end of this, Shirl.” My poor wrecked body has the scars to back this up!