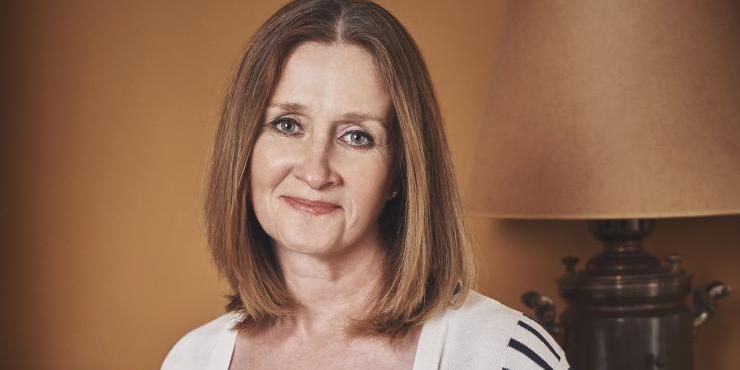 Sharon (formerly known as S.J.) Bolton grew up in a cotton-mill town in Lancashire. Her first novel, Sacrifice, was voted Best New Read by Amazon.uk, whilst her second, Awakening, won the 2010 Mary Higgins Clark award. In 2014, Lost, (UK title, Like This, For Ever) was named RT Magazine’s Best Contemporary Thriller in the US, and in France, Now You See Me won the Plume de Bronze. That same year, Sharon was awarded the CWA Dagger in the Library for her entire body of work.

Sharon’s latest novel The Split is due at the end of May and can be ordered through Suffolk Libraries.

Stephen King and Charlotte Bronte. I like to think my books are a mash-up of the two styles. I was always a big Dickens fan too and try to let his influence seep into all my minor characters.

2. Sacrifice was a bestseller in 2008. As the author of several successful books since, how do you look back on that period of sudden success?

One of the happiest times of my life. I never really believed I could write or that I would be able to make a living from writing until people around the world started telling me I could, and that I did it rather well. It was as though, in my early forties, I’d finally learned who I was.

3. How did you invent the character of Lacey Flint and why do you think she has such a following?

Lacey largely invented herself. I had an idea for a book (Now You See Me) and needed someone to help me tell it and I particularly wanted to use the unreliable narrator device. Lacey volunteered her services but, as with all my protagonists, she developed quite slowly over several drafts of the book. As to her popularity, I think readers become invested in characters, especially those who face challenges in their lives, and they want to learn what becomes of them.

4. Your latest book is The Split. Can you give Suffolk readers a flavour of what to expect?

A classic chase novel set in one of the most hostile and remote regions on the planet. My young heroine, Felicity Lloyd, has fled to Antarctica to escape her estranged husband Freddie, recently released from prison. It isn’t far enough.

5. What is your writing routine? When you are in the midst of writing about serial killers, how do you switch between your writing and everyday life?

I don’t. My husband and son have learned to hide the knives and toxic substances! As to routine, I start the day with a dog walk and then write until I’m mentally too tired to work efficiently.

A sort of twist on the closed room mystery. A very small cast of characters, one of whom is a killer. It’s been a tricky one to write because I normally write stories that are very action led and this one is all about the characters, but I’m getting to the end of the first draft and think it’s working.

Belinda Bauer’s latest, Exit, which is bound to be annoyingly brilliant and I’m also looking forward to Elly Griffiths’ new one, The Lantern Men. For years I’ve been meaning to read the Wolf Hall books, so maybe now is a good time, as the trilogy is complete and I believe I can buy a lovely hardback set.

8. Do you have a message for your many readers in Suffolk?

Thank you for reading and please continue to do so. I hardly know Suffolk at all, so if there are any spooky legends or places you can direct me towards, please feel free. I’m always on the look-out for new locations.

Sharon’s latest novel The Split is due at the end of May and can be ordered through Suffolk Libraries.