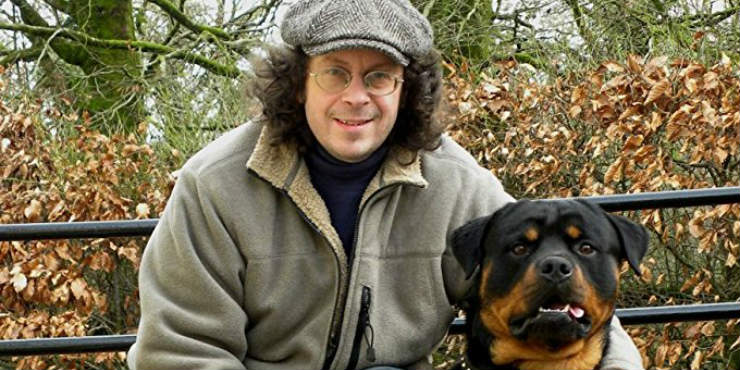 Scott Mariani is a bestselling British author, best known for his thriller novels about ex-SAS Major and former theology student, Ben Hope. The first of these novels, The Alchemist’s Secret, was number one in the UK’s Amazon Kindle chart for six consecutive weeks. His latest book is The Moscow Cipher.

It was a pretty eclectic mixture of stuff, as there wasn’t just one writer or genre that I liked. I read everything from Jane Austen to Arthur Conan Doyle to the great Aldous Huxley. I was also a big fan of horror: Stephen King at the more literary end of that scale and writers like Guy N. Smith at the deliciously nasty and yucky extreme!

Of all of them, Conan Doyle might have been one of the more direct influences on what I write – the Ben Hope novels are essentially detective stories, at the end of the day.

2. When did you realise that Ben Hope was a character you wanted to develop?

The idea for Ben Hope came to me in a flash one day as I was walking my dogs in the fields behind my home. This ex-SAS soldier-turned rescuer and righter of wrongs more or less sprang into my head fully formed with all his psychological quirks and complexities, as opposed to being a character who had gradually taken shape over time. He just felt ‘right’ to me, and very soon afterwards I got working on the first book, The Alchemist’s Secret.

Of course, back then I had no idea it would mark the start of a long and successful series – or even that it would be published at all. This was over ten years ago, and there were no easy independent publishing options available to new authors in those days. Luckily for me, Ben Hope turned out to be a character that lots of readers would want to meet and follow on subsequent adventures. It’s been a great ride, and it’s not over yet!

3. You recently published The Moscow Cipher. Can you tell us a little about that?

It’s the 17th thriller in the Ben Hope series, and came out in June. It follows the same popular theme as its predecessors, drawing our modern-day hero into an intrigue dating back to a period in history.

This time around, the mystery revolves around a rediscovered Cold War code that hides a rather nasty secret – one that certain villains in the story will do pretty much anything to prevent from getting out. Needless to say, it isn’t long before Ben Hope comes into conflict with them, and sparks begin to fly.

As the title suggests, much of the action is set in Russia, which was a location I enjoyed writing about.

4. Are there any advance hints you can give us about The Rebel’s Revenge?

I can’t give away too much about the intrigue, except to say that the historical mystery at the core of the novel goes back to the US Civil War.

Ben Hope, who seems to have a real talent for finding trouble everywhere he goes, gets himself embroiled in a murder hunt in the American Deep South while at the same time trying to unravel the clues from history, and doing battle with some particularly vicious locals. How that pans out, I’ll leave you to find out for yourselves!

The book is out in November.

5. Is there any other book or character you wish you had invented?

I have to be perfectly honest and say there isn’t one that comes to mind.

I’m really just happy to have been able to come up with the character of Ben Hope and managed to keep him popular all these years. For that, of course, I have to thank all the many fans who’ve supported the series from the beginning, with more coming on board all the time.

I tend to do a lot more non-fiction reading these days, on a range of subjects: history and science mostly.

On the fiction front, I recently finished Peter May’s Coffin Road, and I’m looking forward to getting stuck into John Grisham’s latest, The Rooster Bar, when I get time…

I’m really delighted to know that your readers are enjoying the Ben Hope series, and I hope they continue to do so! They’ll have plenty of opportunity, since I have no plans to retire him yet.

I used to drive a Porsche, but came to my senses and got rid of the dreadful thing, and now my everyday vehicle is an old ex-army Land Rover with all the military trimmings (minus machine gun). There’s nothing better for rumbling about the hills and valleys of rural west Wales, where I live. The more mud and snow, the better. Life is good. ☺