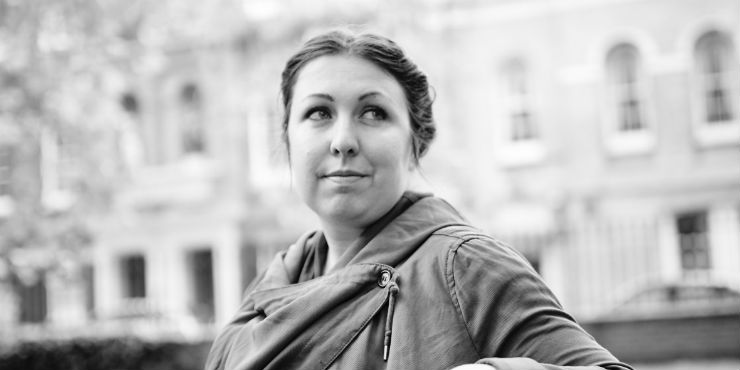 Ruth Ware grew up in Lewes, Sussex. After graduating from Manchester University, she moved to Paris before settling in North London. She has worked as a waitress, a bookseller, a teacher of English as a foreign language and a press officer. Her début thriller, In a Dark, Dark Wood, was a Sunday Times and New York Times bestseller and a Richard and Judy pick, and has been optioned for film by New Line Cinema. Her latest book The Woman in Cabin 10 was published at the end of June and is available to order through Suffolk Libraries.

Too many to list, but I started with Mog and Astrid Lindgren, moved onto Enid Blyton and Elinor M Brent Dyer, took in Agatha Christie, Colette, Nancy and Jessica Mitford, Daphne du Maurier and Antonia White… lots of women telling sweeping, dramatic stories, although I also have a fondness for comedy and read and re-read PG Wodehouse’s Jeeves and Wooster series, as well as his less well known Mike and Psmith books. Three Men in a Boat and Cold Comfort Farm were books I encountered as a teen, and are still on my list of cheer-up reads today. I was a voracious reader though, so it’s probably fairer to say my library card was my most significant literary influence!

In a Dark, Dark Wood has a flow about it that sweeps the story along. Was it written quickly or is this just a reader’s impression?

Um… I don’t know about quickly. It didn’t feel very quick at the time, but I suppose it took about 6 months to write, which is fairly quick in the scheme of things. There was probably another six months of editing after that, to whip it into shape! I had enormous fun writing it though, so I hope that shows through.

It would make a great film. Are there any plans to develop it?

Well, it’s been optioned as a film by New Line Cinema (who made Lord of the Rings) and Reese Witherspoon is attached to produce so… crossing my fingers very hard!

How does it feel to be a published writer having been a bookseller?

I was only a part-time bookseller for a couple of years in my late teens, then I moved over to work in publishing, but I think if you’ve been on the other side of the fence you realise what a lottery it is, and how much luck is involved. I never expected my book to become one of the ones stacked up on bookshop tables. It’s amazing but unreal!

My follow up to In a Dark Dark Wood is coming out June 2016 - it’s called The Woman in Cabin 10 and is about a disappearance on a cruise. And I’m hard at work on my third, but I can’t talk too much about that in case I jinx it! Getting back on the horse is the only cure for pre-publication nerves, I’ve found.

Just to please carry on supporting libraries and authors. I’m not sure if all library users know that every time they borrow a book they’re supporting that author via public lending right (a government grant that pays writers a few pence every time a book is borrowed). It’s a payment that can make a real difference to struggling writers, but it’s not only that, it’s the wonderful feeling of getting the figures and knowing that hundreds or maybe thousands of people have borrowed your book. So please carry on reading and borrowing!

Can you describe yourself in three words?

Writer. Procrastinator. Coffee-drinker. Not always in that order.