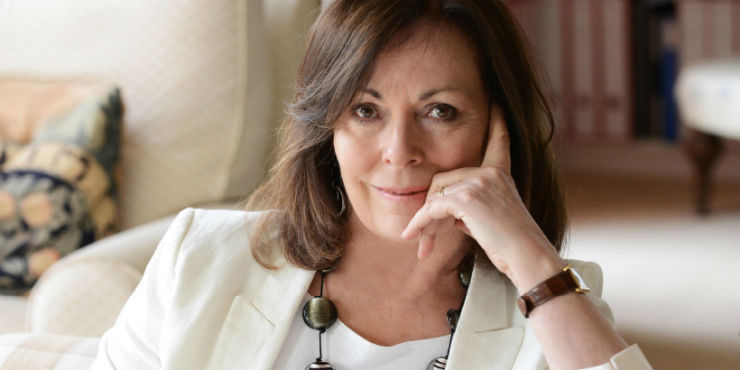 Rose Tremain was one of only five women writers to be included in Granta’s original list of 20 Best of Young British Novelists in 1983. Her novels and short stories have been published worldwide in 27 countries and have won many prizes, including the Sunday Express book of the Year Award (for Restoration, also shortlisted for the Booker Prize); the Prix Femina Etranger, France (for Sacred Country); the Whitbread Novel of the Year Award (for Music & Silence) and the Orange Prize for Fiction 2008 (for The Road Home). Restoration was filmed in 1995 and a stage version was produced in 2009.

Her latest novel is the acclaimed The Gustav Sonata which sees Rose writing at the height of her inimitable powers (Observer). Rose’s books are available through Suffolk Libraries.

Who were your literary influences when you were growing up?

At my school, we read no contemporary literature at all. It wasn’t until I was about sixteen that I discovered, for instance, Lawrence Durrell, whose over-rated purple prose felt beautiful to me then. I loved it so much, I wanted to eat the text! Meanwhile, I tried to write lyric poetry like Keats and gripping yarns, like Conrad. But the then Poet Laureate, John Masefield was watching over me. Our class made some poster-paint pictures of scenes from his novel, Lost Endeavour, and sent them to Masefield, and he was so touched that he invited us all to tea. I was then about 14 and I confided to him that I wanted to be a writer and he quoted W.B. Yeats to me: “Do not hurry, do not rest.” And I have never forgotten this.

Do you spend a lot of time researching? What is your writing routine?

Research is important. If, like me, you write about experiences outside your own, you have to know the world you’re trying to evoke. I work not only from written research, but a lot from pictures and photographs. For my recent novel, The Gustav Sonata, one of the most helpful sources was a traveller’s guide to Switzerland, heavily illustrated with pictures of everything from pastures to patisserie, cathedrals to cheese manufacture. Interior scenes and indeed landscapes can be evoked by the tiniest details, but they have to feel real and true. But here, I was also helped by my own memorable experiences of being taken to Switzerland as a young child and, later being sent to school there for a year.

Writing routines vary for every one of us. The most important thing, when I’m working on a novel, is to try to clear the diary of interruptions. This isn’t always easy because talking to audiences about our work has become part of a writer’s life. But my happiest days are those when I can work without being disturbed for six or seven hours.

What draws you to a new subject?

This is a mysterious process. Over a long writing life, I’ve been drawn to a variety of subjects and themes and I can never predict where I’m likely to go next. But this, I think, is what has kept me going over forty years as a published author. I seldom recycle any part of my own biography, but search for new places and characters who are distant from me in age, type and (often) gender. This is the process which gets my imagination working. Dreaming a new story into existence is as enthralling to me now as it was when I was 30.

I think people love Robert Merivel because we are all – every one of us – like him, in certain ways. We are courageous and yet afraid, boastful and yet uncertain of our capacities, drawn to material splendour but pricked by a puritanical conscience. We can also usually predict – ahead of him – the troubles he is going to tumble into, and then laugh or cry with him. In other words, he is human and fallible, but often saved by irony and wit and a tendency to collapse into drunken monologues or unstoppable giggling at inappropriate moments.

Once this character was ‘found’, via his voice and his appetites, it was easy to become him. I always knew that, one day, I would write the sequel to Restoration and this came out (Merivel: A Man of His Time) in 2013. In the second book, Sir Robert is older, but not much wiser and the world around him begins to darken.

Are Anton and Gustav in The Gustav Sonata based on anyone?

These boys are pure inventions, not based on anyone. However, in the opening section, I draw on some personal recollections of the loneliness of childhood and its terrors and the way adult behaviour is so unpredictable. Connected to the idea of Swiss ‘neutrality’ (a state much harder to sustain that we might suppose), I wanted to create a person, Gustav, who, because he is not loved, strives for a kind of ‘neutrality of feeling’ all his life. He achieves a high degree of self-mastery, but his passionate love for Anton threatens to undermine this from the day they first meet at Kindergarten, aged 5. Anton is Gustav’s antithesis, the spoilt child of loving parents, with seemingly boundless self-belief. Yet Anton, too, is overwhelmed by destructive forces within himself and he comes to realise that the only person who can save him is Gustav.

What is your latest project?

I’m working on several things: a stage play based on my short story, The Darkness of Wallis Simpson, a 3-part TV adaptation of my novel, Trespass, a mystery with incest at its troubled heart, set in the Cevennes region of France, and a story for children about an iron bird. I have a new idea for a novel, but this is a tiny, hard-to-see embryo, which may or may not put on flesh and acquire a beating heart. Watch this space – or rather, perhaps, don’t watch it!

You’ve been patient with my many excursions into different forms and subjects and I hope most of you have found something to love. I’ll try to keep on working and experimenting and not let you down.