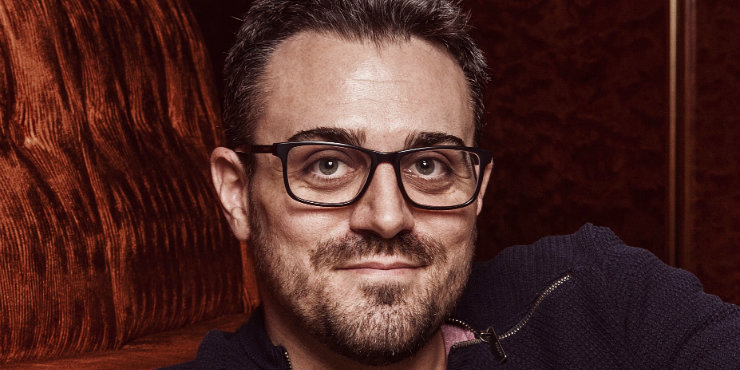 Robert Bryndza grew up in Lowestoft. The first book in his Detective Erika Foster series, The Girl in the Ice, was an international bestseller, with over one million copies sold.

The Night Stalker, Dark Water, Last Breath and Cold Blood followed. The sixth book, Deadly Secrets, came out last April. Robert’s books have sold over 2.5 million copies and have been translated into 28 languages.

Sue Townsend was a huge influence on me. I love her Adrian Mole series, and her standalone novels and plays. She was a genius writer and her books are a great social commentary on British society. I am so sad that she died, when I’m sure she still had so many books to write. I would love to read her take on Brexit, Donald Trump, and the age of social media.

2. You started out writing romantic comedy novels. How did your move into crime fiction and the creation of DCI Erika Foster happen?

I enjoy writing romantic comedy, but I always harboured an ambition to write something darker. I live in Slovakia, and in the town where we live there is an old derelict underwater restaurant, built into the side of a small lake and overgrown with trees. I’d often pass it and think it was a great place to hide a dead body, just before the winter freeze, where it would stay locked away for months! I started to develop this idea, and thought that creating the character of a Slovak detective could be original.

At the time (I started writing in early 2015) the first rumblings of the Brexit referendum were starting in the media, and I thought it could be interesting to write from the perspective of Slovak who has lived in the UK for 20 years, and works as a detective in the London Metropolitan police, and so Erika Foster was born.

3. The latest two books we have over here are Dark Water and Deadly Secrets. Can you tell us a little about them?

Dark Water is the third Erika Foster novel, and it involves the unsolved cold case of 11-year-old Jessica Collins, who disappeared 26 years ago on her way to a friend’s birthday party. Erika is working in narcotics, and she has an old water filled quarry in South London searched by divers to look for a stash of drugs. There are no drugs, but the divers find the skeleton of Jessica Collins. Erika is compelled to solve the cold case and find out what happened to Jessica.

In Deadly Secrets, a mother wakes to find her daughter’s blood-soaked body frozen to the road, on an icy Christmas morning. She had been brutally stabbed to death. When Erika is called it to investigate, she discovers the young woman had many enemies and led a very colourful life. The book is a ‘whodunit’ with what I hope is a shocking twist at the end of the story!

4. You announced in May that you are creating a new character, Private Detective Kate Marshall. When will we get our first glimpse of her?

I have just completed the first draft of the new book, and I hope that next year readers will get their first glimpse of Kate Marshall. I’m very excited to have the opportunity to create a new character, and I hope that this can become a new series that I can write alongside future Erika Foster novels.

The Turn of Midnight by Minette Walters. I loved The Last Hours and I’m looking forward to reading the second part of the story.

Wuthering Heights by Emily Brontë. I studied the book at school when I was 14. I hated having to read it for lessons, I think because my class had to take it in turns to read it out loud, which was pretty torturous!

We had to write an essay on the book at the end of term. I remember this was quite an important essay, so I knew I had to re-read it. I reluctantly started the book one Saturday morning and I was transported completely into the story. It was the first time this ever happened to me. I finished the book in one weekend and that experience turned me into an avid reader.

I’m thrilled to hear that so many readers have enjoyed borrowing and reading my books, thank you. Suffolk libraries hold a special place in my heart, because I was born and grew up in Lowestoft, and I spent a lot of my youth in the wonderful Lowestoft library, borrowing books.

Bryndza is also a type of cheese, made with sheep milk. It’s delicious, and is the national cheese of Slovakia. My email account automatically translates everything into English, so I will often receive emails that begin with “Dear Robert Sheep – Cheese.”