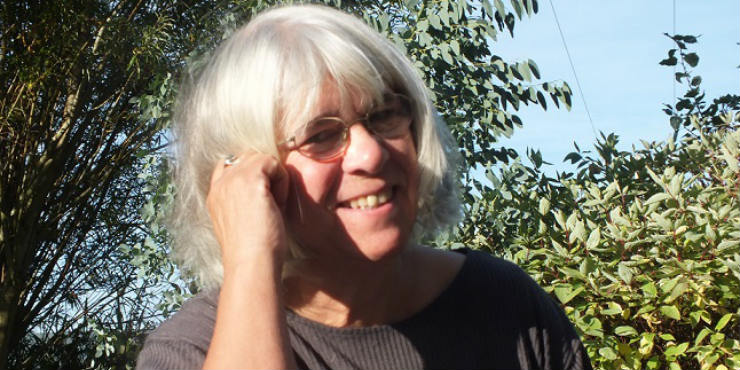 Rebecca Tope is a British crime novelist and journalist. She is the author of three murder mystery series, featuring Den Cooper, a Devon police detective, Drew Slocombe, an undertaker and former nurse, Thea Osborne, a housesitter in the Cotswolds, and Persimmon ‘Simmy’ Brown, a florist in the Lake District. She is also ghost writer of the novels based on the ITV series Rosemary and Thyme.

Rebecca’s latest book, Peril in the Cotswolds was released last August and has been very popular among Suffolk Libraries customers.

Enid Blyton for quite a long time. I still think she’s excellent.

Then Mazo de la Roche and the Whiteoaks saga - wonderful characterisations. Dennis Wheatley for excitement. I read a lot of Biggles books. I liked fiction from the 1940s and 50s – Frank Yerby, Leslie Charteris, etc. And a later influence (and mentor) was the wonderful Celia Fremlin.

2. What do you think is the appeal to readers of Thea and her spaniel Hepzie?

Thea is not always predictable, never minds her own business, and has a healthy streak of cynicism. I only recently realised how far she is from the ‘approved’ protagonist of this sub-genre. Apparently they are supposed to be 100% likeable.

Hepzie, of course, is adorable.

3. You are often described as a ‘cosy crime’ writer. Is this a label you are happy with?

Not really. I might not show very much actual gore, but I do kill dogs, cats and children.

Somebody once told me the definition of a British cosy is that it has to have a pub in it. I think almost all my books qualify on that basis.

4. What is your writing routine? Does it just flow or is everything intricately plotted out on the wall?

Hardly any plotting. I tell myself the story, knowing very little of what’s going to happen in advance.

5. Is there anything you can share about your latest ‘work in progress’?

I have actually just finished Crisis in the Cotswolds. Thea and Drew are still struggling to make a success of their business and their marriage, with murders interrupting them along the way.

I’m just starting The Grasmere Grudge, where Simmy takes a closer interest in her boyfriend Christopher’s work as an auctioneer in the Lake District.

The list is very long indeed. It includes the novels of Helen Fitzgerald, the big Ken Follett Century trilogy, the new biography of Charles Darwin, Kate Summerscale’s The Wicked Boy, a lot of classic crime noir and several titles from recent Booker shortlists.

Thank you for your loyalty and enthusiasm. I’m always happy to receive emails commenting on the books, positively or negatively!

8. Can you tell us one thing that your readers may not know about you?

On my mother’s side I am a descendant of the Veitch family, who founded the Chelsea Flower Show.