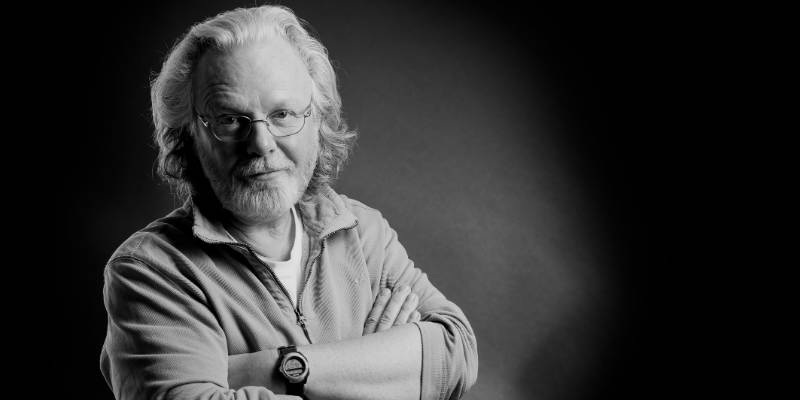 Peter May is a Scottish television screenwriter, novelist, and crime writer. He is well known to Suffolk library readers for his series The Lewis Trilogy, The Enzo Files and The China Thrillers. Peter’s books have sold more than two million copies in the UK and several million internationally.

My earliest influences came from Hergé’s Adventures of Tintin. I loved the characterisation in his stories, the humour, the wonderfully researched and evocative drawings that took me around the world to exotic places I had barely heard of as a child. I had all the books and read those stories again and again. They made me want both to write and to draw.

When I was about 12, my aunt committed suicide and my uncle came to live with us for around 18 months. I was displaced from my bedroom, and slept on the sofa in the lounge. At the end of the sofa was a bookcase groaning with the many books read by my literature-loving parents (my father was an English teacher). I was always awake first in the morning and would lie looking at those books, fascinated by the names of the authors - Lewis Grassic Gibbon, Aldous Huxley, Ernest Hemingway; and the titles - For Whom the Bell Tolls, The Purple Plane, The Case of the Black-Eyed Blond.

It was an electric mix of literature and popular fiction, and I had no idea where the line was drawn between them. So when, finally, I started to read them, I drew no distinction between one and the other and just worked my way along the shelves. It was a voyage of discovery that shaped all my future reading, and probably the style and form of my future writing. Some of those authors became very influential in the years to come, particularly Ernest Hemingway, Graham Greene with a later discovery being the Irish/American writer, J.P. Donleavy.

2. Do you read other crime writers or is your time taken up by research?

I have very little time to read for pleasure. In the last few years most of my reading has been for research. Travel time is usually when I grab the chance to read for fun. And, of course, I have read most of the current crop of bestselling crime writers, as well as those titans of the past, like Raymond Chandler and Dorothy L. Sayers. But I also like to read literary fiction as well as a broad spectrum of non-fiction.

3. Is it true that the Chinese Crime Writers’ Association made you an honorary member after the publication of your China thrillers?

It happened while I was in China working on the series. I had been given a great deal of help both by the Chinese police, and various Chinese crime writers during my research. Built into Chinese culture is a phenomenon known as Guan Xi - I scratch your back, you scratch mine. It is virtually obligatory to return favours given. So it was no surprise when it came my turn to return the favours that had been given to me.

It was coming up to the 50th anniversary of the founding of the People’s Republic of China, and the crime writers were organising a special event in the Great Hall of the People in Beijing to celebrate. They were going to award prizes for each year, as well as a prize for the best international crime writer (which, I think, turned out to be Sue Grafton). They asked me if I could acquire a letter of congratulations from the British Crime Writers’ Association, to be read out on stage during the event. When I asked the CWA, they suggested it might be better coming from the international federation of Crime Writers’ Associations. So I asked them, and they immediately agreed. But they also asked why the Chinese were not member of the international federation, and I replied that they had never been asked (the Chinese writers were actually feeling quite ignored by the international community).

The federation told me that they could easily remedy that. So when I returned to Beijing, it was with both a letter of congratulations, and an invitation to join the international community of crime writers. They were so delighted that I was immediately made an honorary member of the Beijing Chapter of the Chinese CWA, and presented with the Chinese dragon of justice at a special banquet.

4. How do you know when an idea has the potential to become a fully fledged novel?

To be honest, you never really know until you have written the final sentence of the book. But there is usually an instinct at work that guides you to choose one idea over another. You just have a feeling that the story has substance and can be sustained over the length of a novel.

I am in the middle of a sabbatical year, which I earned for myself by writing two books last year - my annual novel, Coffin Road, and the final book in the Enzo series which, due to a change of publisher in the US, was five years overdue. It is called Cast Iron, and will be out in January 2017. But I have also signed a new three-book deal, and am planning another trilogy set in the Hebrides - but with very different characters and background from the Lewis Trilogy.

Keep reading. It is readers who keep libraries alive, and libraries really are the foundation of a literate society - despite the best attempts of government to shut them all down.

7. Can you tell us one thing about yourself that none of your readers will know?

My first love was a Spanish girl I met on holiday in Spain at the age of thirteen. I became obsessed with all things Spanish and read extensively about the country. When I came to sit my Higher English exam, I spent nearly the entire time allowed for it on my composition - writing a story set in a train during the Franco regime. It might have been one of the best stories I wrote as a teenager, but it meant I only got a B instead of an A, because I had to rush through the rest of the exam. It is one of the reasons I didn’t go to university. But, then again, I believe that if I had I might not have become a writer.