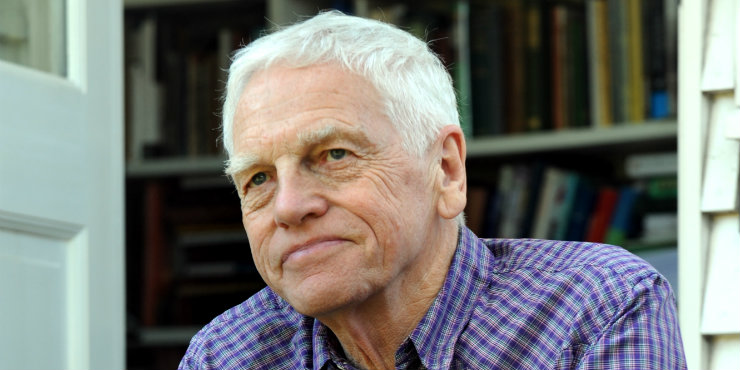 Peter Lovesey is a multi award-winning British writer of historical and contemporary detective novels and short stories. His best-known series characters are Sergeant Cribb, a Victorian-era police detective based in London, and Peter Diamond, a modern-day police detective in Bath. Peter’s latest book Another One Goes Tonight is of course available through Suffolk Libraries. The Detection Club’s 80th Birthday edition in Peter’s honour, Motives for Murder, is also available.

My house was hit by a VI ‘Flying Bomb’ – or Doodlebug – when I was 8, in 1944, and had just discovered the magic of reading. I was on the William books by Richmal Crompton at the time. But the bombing altered everything. No books, no toys. My parents had other priorities like finding a home and feeding and clothing their 3 sons.

Eventually my dad brought home 2 books for his own reading and to a 10-year-old they had unpromising titles: The Life of Sir Edward Marshall Hall and Alias The Saint. But I was eager to read anything and made a start. I soon found that Marshall Hall had been a brilliant defence lawyer involved in some of the most sensational murder trials of the century. Each page had a heading I found irresistible: The Green Bicycle Case; Brides in the Bath; Exit Seddon the Boaster; Could He Have Saved Dr Crippen?; Madame Fahmy’s Acquittal – and so on. It was swift education in real crime.

Then I turned to the other book, which I’d assumed from the title was a religious story, and found that the Saint was Simon Templar and the author Leslie Charteris. So I read my first crime novel. Without any question these 2 books predisposed me to writing about crime when the chance came later.

How was Peter Diamond invented? Was he based on anyone?

My crime writing career began in 1970 with a book called Wobble to Death that won a big prize – £1,000 – in a first crime novel competition. It was set in Victorian times and my first 8 books all featured the same Detective, Sergeant Cribb. They were bought for TV and the series called Cribb was very popular, with a prime time slot at 9 o’clock on Sunday nights. It established me as a writer and gave me the chance to go full time, which I did in 1975.

So for a long time I was known as a writer of historical mysteries, but I wanted the challenge of writing modern police procedural novels and took the plunge with Peter Diamond, the head of the murder squad in Bath, close to where I was living at the time. He had to be abrasive, tough and suspicious of forensics and modern methods of detective work because all I knew at the time was how the 19th century policemen functioned. Many of my characters are based on real people, but Diamond wasn’t. He just walked into my imagination ready to take over. I suppose there are elements of my own thinking in his personality, but we don’t look the same at all and I hope I’m not such a curmudgeon as he often is. However, he has a likeable side as well and he’s a cracking detective.

Crime writing is so varied now, ranging from classic whodunits to Scandi noir. Where do you place yourself in the genre?

I’m out there with the polar bear and the orang-utan and the great-crested newt as one of an endangered species. The majority of my books – not all – fit that classic whodunit tag. It’s not particularly fashionable with the critics, but it’s hugely satisfying to write and to read. No form of writing has been invented that can match its perfect structure. Read a whodunit and you will be assured – if it’s well done – of lively characters, entertaining surprises, fascinating settings and a suspenseful story that is structured to explain every twist by the last chapter.

It must have been a huge honour to be selected for the Detection Club’s Motives for Murder edition this year.

A great thrill and a wonderful evening at the Dorchester when I was presented with the UK and American editions. The Detection Club is even older than I am, founded in 1930 by the likes of Dorothy L. Sayers, G. K. Chesterton and Anthony Berkeley as an invitation–only society of writers who specialised in the whodunit form. In 1974, when I joined, the rules had been modified enough for John le Carré to join with me, but the President was still Agatha Christie.

There are about 50 of us and we meet twice a year at the Garrick Club and once, more formally, at the Dorchester Hotel where we welcome new members with an initiation ceremony involving a real human skull on a cushion with red eyes that light up. I’m honoured that they marked my 80th birthday with this book of short stories. I’ve had various other writing prizes over the years, but this was extra special, coming from my peers.

Keep on reading them and I’ll keep writing them until someone taps me on the shoulder and says time is up. Better still, request the ones you haven’t seen and keep those librarians busy as well. My favourites include The Reaper, The False Inspector Dew and Rough Cider, none of which are in a series. Libraries have been a life-support for me over the years and we must ensure that they stay open.

What is the best piece of advice you were ever given?

It came from my wife, Jax: “I’ve seen an advert for a first crime novel competition. Why don’t you go in for it? I’m sure you could write one if you tried.””

Can you tell us one thing that your readers might not know about you?