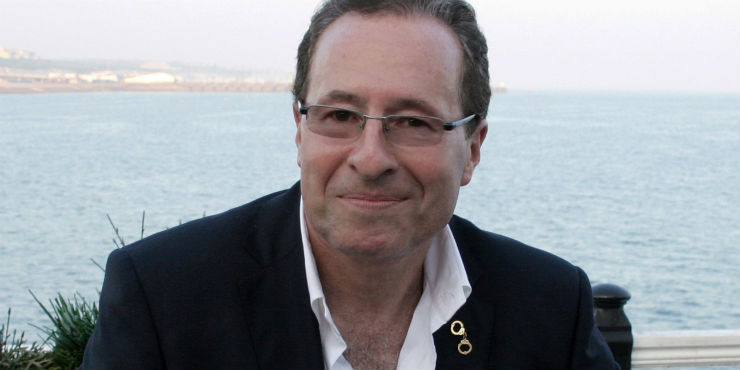 Peter James is an international best-selling crime thriller novelist who has had his books published in 36 languages. His series featuring Brighton-based Detective Superintendent Roy Grace has sold 17 million copies worldwide and has given him eight consecutive UK Sunday Times number ones. In 2015 he was voted ‘The Best Crime & Thriller Author of All Time’ in a WHSmith poll.

If you enjoy reading this piece, why not meet Peter yourself? He will be at Kesgrave Hall near Ipswich at midday on 17 June where he will be sharing some stories about his work and his life (fictional and true!). Tickets are £38.50 per person, which includes a two-course lunch with coffee, and he will be signing copies of I Love You Dead. Waterstone’s will be selling copies of all Peter’s books at the event, as well as paperbacks of The House On Cold Hill. For more details visit www.action.org.uk/dine-crime-writer-peter-james.

When I was 14, I read Graham Greene’s Brighton Rock and this book totally changed my life. It is quite simply the book that made me realise I wanted to be a writer, the first time I read it, as a teenager. It is also the inspiration behind my setting the Roy Grace series in Brighton.

This timeless novel is both a thriller and a crime novel, although police play a small part and the story is almost entirely told through the eyes of the villains and two women who believe they can redeem them. Greene has a way of describing characters, in just a few sentences, that makes you feel you know them inside out and have probably met them, and his sense of “place” is almost palpable. It is for me an almost perfect novel. It has one of the most grabbing opening lines ever written (“Hale knew, within thirty minutes of arriving in Brighton, that they meant to kill him.”), and one of the finest last lines - very clever, very tantalising and very, very “noir” - yet apt. Greene captures so vividly the dark, criminal underbelly of Brighton and Hove, as relevant now as when the book was first written, and the characters are wonderful, deeply human, deeply flawed and tragic. And yet, far more than being just an incredibly tense thriller, Greene uses the novel to explore big themes of religious faith, love and honour. And additionally, a bonus, It is also unique for being one of the few novels where the film adaptation is so good it complements rather than reduces the book. But it is not just Brighton Rock - I learn so much from Green’s writing. I don’t think any writer before or after him has been able to create such vivid characters with so few words and description.

Can you tell us about Dave Gaylor and how he inspired Roy Grace?

Back in 1995, I was introduced to a young homicide Detective Inspector, David Gaylor. I remember entering his office at the Sussex CID HQ on the outskirts of Brighton and finding almost every inch of the work surfaces and floor covered in blue and green plastic crates, bulging with manila folders. I asked him if he was moving offices, and he replied with a sardonic smile, “No, these are my dead friends!”

For an instant I thought I had met a total weirdo! Then he explained to me that in addition to his duties as a current homicide detective, he had recently been tasked with re-examining all the unsolved homicides in the country, and applying the latest advances in forensics on them. “Each one of these crates contains the principal case file of an unsolved murder,” he said. “I am the last chance each victim has for justice – and I’m the last chance their families have for closure.”

I loved that very human aspect of him, and it is a trait I’ve come to realise is common among good homicide detectives. They bond with the family of the victim and it becomes personal to them. It is part of the reason you often see a detective still pursuing a killer years after retirement.

David Gaylor then asked me to tell him about the current book I was working on – a psychological thriller called Denial. Halfway through he interrupted me, asking why I hadn’t thought of the police officers doing this, and that… and why my character had done one thing instead of another… And I realised rapidly that he had a very big creative bandwidth. Again, that is a trait I’ve come to realise is common among good detectives: a homicide, like any major crime, is a huge puzzle, with hundreds and sometimes thousands of tiny pieces that have to be meticulously and painstakingly put together. But in addition to being scrupulously methodical, good homicide detectives are often lateral, out-of-the-box thinkers.

David and I became good friends and he helped me with many police and psychology aspects of the subsequent books I wrote. So when in 2001 my publishers, Macmillan, approached me through my agent and asked if I would consider creating a new fictional detective character with a view to writing a crime series for them, I went to Dave, who had by now been promoted to Detective Chief Superintendent, Head of Major Crime for Sussex, and asked him how he would feel about being a fictional cop! He loved it, and Detective Superintendent Roy Grace was born!

How did Death Comes Knocking come about?

For many years David Gaylor was my principal contact in Sussex Police, working closely with me on the planning of my stories and giving me introductions to any officers he felt would be helpful to my research on each successive Roy Grace novel, to lend my books the authenticity I try hard to maintain. When he retired, I was immensely fortunate to have that baton taken on by his good friend, Chief Superintendent Graham Bartlett, himself a former senior homicide detective, who then became Commander of Brighton and Hove Police.

Graham and I instantly hit it off and he was an invaluable help to me for several years. When he was coming up to retirement he told me he harboured ambitions to become a published author, and sent me examples of blogs he had written over the years, for me to judge his skills. Then I had a true light bulb moment. Many people had been suggesting to me, over the years, that I should write a non-fiction book about my research with the police and throughout his thirty year career, Graham had the unique experience of policing Brighton and Hove at every rank and had been involved in many of the cases that provided inspiration both for characters and for plots of my novels. He clearly had writing talent. We decided to collaborate and write a book about what it was really like to be a police officer in Roy Grace’s Brighton and it is published on July 14 this year!

How do you know when a story has the potential to become a book?

It’s a gut feeling really, an instinct. I can’t describe the parameters, I just know. For example, when I first heard about the case of the Rotherham Shoe Rapist I knew I had the basis for a story. This was the case that inspired my sixth Roy Grace novel, Dead Like You.

If you had not become a writer what career would you have liked to follow?

When I was in my teens I wanted to write books, make films and be a racing driver. I’ve been lucky in managing to make a living out of the first two, and although I do love motor racing, I’m glad I never took it up as a profession, because I don’t think I would have been good enough!

Roy Grace Number 12, Love You Dead, has just been published, and it has gone straight in at Number One to the UK Bestseller charts so I’m delighted about that. I am already over 200 pages in to Roy Grace 13. The paperback of my ghost story The House on Cold Hill is being published on June 16 and Death Comes Knocking – Policing Roy Grace’s Brighton is published on July 14 – as mentioned. Aside from that and many other things, I am working closely with my co-producer Josh Andrews, director Ian Talbot, and script writer Shaun McKenna, to bring Not Dead Enough to stage on a nationwide tour starting in Dartford on January 26 2017!

Crime writing seems to be very healthy in the UK at the moment. Why do you think this is?

I think it has always been healthy. During the Cold War spy thrillers took a big chunk of readership away, but since the demise of the Cold War the notion of the spy is less romantic, and terrorism is a real fear and something of a turn-off to read about. People feel safe reading good crime fiction, particularly when the detective they know will put the world back in order at the end… or so they hope!

Your books are very popular here in Suffolk. Do you have a message for your readers?

I love Suffolk. I’ve sailed out of Orford many times and we are going to stay with some friends soon, in Walberswick. I think I’ll have to have a really gruesome murder in Suffolk sometime!

Reserve books by Peter James from our libraries.