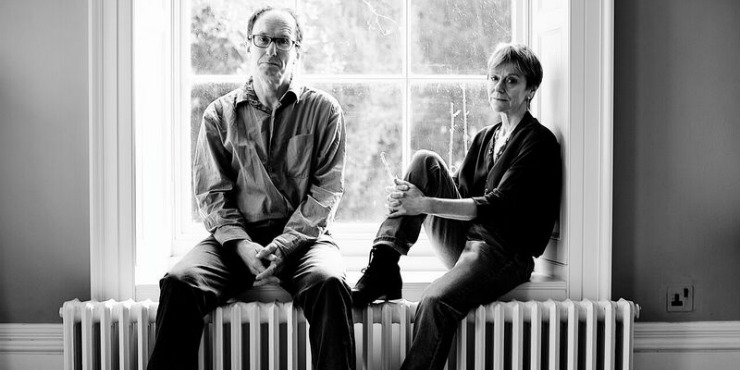 Nicci French is the pseudonym of husband-and wife-team Sean French and Nicci Gerrard. They write seamless psychological thrillers while pursuing their own writing careers. Their novels include The Memory Game, The Safe House, Killing me Softly, Beneath the Skin and The Red Room. They live in Suffolk, and appeared at Suffolk Libraries Bookfest 2016. Their most recent book is Saturday Requiem.

Sean: I can say what I read while growing up, which is almost everything from Biggles to Mark Twain, Tove Jansson to Tolkien. I also read Raymond Chandler and Agatha Christie and (over and over again) the Sherlock Holmes stories. But what it was that got into my imagination and my way of handling words I find utterly impossible to say.

Nicci: My mother used to read to us every day when we came home from school, sometimes for an hour or more: novels, short stories, poetry. So I can still recite most of The Highwayman by heart, and O captain, my Captain. I recall Wilkie Collins’s The Moonstone more vividly than almost any other book. And I remember the shock I had (in a wonderful way) when I first read Jane Eyre, by Charlotte Brontë: it was the narrative voice, the sense of something wild and angry held in check and sometimes breaking through. I have re-read that novel many times since, just to hold it in my mind.

2. What is your writing routine?

Of course, a lot of time as Nicci French is spent not writing. We are talking, researching, cycling round London, thinking. But in the end we have to get down to the actual writing. At home, Sean works in a shed in the garden and Nicci in an attic at the top of the house. But we’re often not at home and we have laptop computers and we worked at journalists so we’re used to writing anywhere. We both feel that one shouldn’t try to achieve the ‘perfect place’ to write or the ‘perfect time’ to write. You need a bit of chaos, a bit of grit in the oyster.

3. How do you both know when you have found Nicci French’s ‘voice’?

We spend a lot of time preparing a book, deciding the key points of the story, the significant characters, the atmosphere, and, crucially, the setting. This is essential anyway as preparation for the complicated business of creating a novel. But it’s also a way of making sure that we have the same book in our head. The most common reason for abandoning an idea is that it’s not right, or just not good enough; but sometimes it’s because we just see it in different ways and can’t settle on a single vision. But when we are sure that we do have that common vision, then we’ve found the voice. But it’s a strange and messy business.

4. Is psychotherapist Frieda Klein based on anyone?

We have, on occasion, based characters on specific people (we’re not saying who; one of them was horribly murdered – the character, that is, not the person!). We have often taken details from people. Frieda is different. She somehow came to us fully-formed. Her work as a therapist is, of course, based on an authentic way of doing therapy, and we know a number of therapists and have met many others, but she isn’t based on any of them, even loosely. Of all the characters we’ve written, Frieda has felt like the one we’ve found out about, rather than created.

5. Is there anything you can share with us about any of your works in progress?

One of the great myths is that there is anything interesting about a work in progress. Films are fascinating, but if you visit a film set you will find it almost intolerably boring, with people just standing around waiting for lights to be adjusted. We’re even worse: just two people sitting in different rooms staring at a screen, every so often standing up and looking out of the window or making a cup of tea. Now we are just a couple of weeks into writing the final book in the Frieda Klein series. If we sit in front of a screen for long enough, it will probably be finished some time next spring. And we won’t tell you anything at all about it!

We have spent many happy evenings meeting readers in libraries in every corner of Suffolk, a county we live in and love. If we have any message it would be to do anything you can to support your local library. Our libraries are one of the glories of our country. Sometimes we don’t value them enough.

7. What is the best piece of advice you were ever given?

Kipling’s If is full of good advice: ‘If you can trust yourself when all men doubt you,/But make allowance for their doubting too…’ Every author should try to follow that.

Also, read every day and write every day. It’s hard to get a book published, but it’s especially hard if you don’t write it.