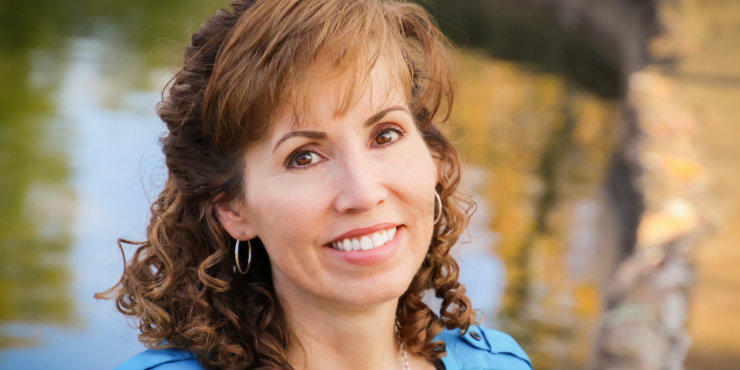 Lisa Wingate is a former journalist, inspirational speaker, and bestselling author. She has written thirty novels. Before We Were Yours stayed on the New York Times Bestseller List for over a year, was Publishers Weekly’s 3rd longest running bestseller of 2017, and was voted by readers as the 2017 Goodreads Choice Award winner for historical fiction.

I’ve been a fan of Mark Twain since childhood and, indeed, you’ll find parallels between Before We Were Yours and Huckleberry Finn.

Another favourite, always dear to my heart, was a somewhat tattered copy of Little House on the Prairie. I never actually owned it, or borrowed it, or even actually touched it, so it never graced my bookshelf. But I lived it page-by-page as my fifth-grade teacher, Mrs. Dodd, read to us at the end of each school day (If we’d been very, very good as a class, of course).

For a kid who would’ve much preferred to be barefoot in a field somewhere and who despaired of ever making it through a sheet of one hundred times tables in five minutes or less, there was nothing so serene, so glorious, so ultimately reassuring as closing my eyes and sinking into the world of Laura, Mary, Carrie, Ma, and Pa. In my mind –– and often in the back pasture on my little white pony, Spirit, after school –– I was Laura Ingalls Wilder. The fences were few, the prairie was wide, and the adventures were endless.

That book and Mrs. Dodd not only helped me survive the year of the dreaded timed times table tests and double-digit long division, it ignited my imagination, fuelled my rebellious streak, and fostered a love of history and story for which I remain grateful to this day.

2. When you were writing Before We Were Yours, at what point did you feel you found Rill’s voice and character?

In Chapter Two, I felt Rill’s voice was formed. Queenie has difficulty with the birth, the midwife says she can’t handle this and Queenie needs to go to the hospital. Briny can’t really deal with that. Rill takes a big step in coming of age when she tells her father he must take Queenie across water, deals with the midwife who demands her pay, then takes care of the children overnight just as the oldest child would, and then their world changes.

Rill’s story is like the stories of so many children who fought not only to survive and adapt, but to reclaim their lives, their family bonds, and their stolen identities. What I admired and treasured most about Rill in the end was her grit, her enduring love for her siblings, and her ability, against all odds, to cling to her sense of who she is.

3. Before We Were Yours has become a book group favourite worldwide. What do you think it is about this book that resonates with so many readers?

Across geographical and cultural differences I think we are united by an innate human need to see justice done and the helpless protected from those who would use money, power, and influence to take advantage or to profit.

Poor families and, in particular, children like Rill and her siblings are economically helpless, physically unable to defend themselves, and without power in society. They are literally at the mercy of adults. It’s natural for us to want to step in, to advocate for them, to see that they are protected, cared for, and provided with safe, nurturing environments in which to grow up. When we see situations that run counter to that, especially those allowed to happen on a broad scale and for decades, as was the case with the Tennessee Children’s Home Society, we want to understand how something like that can happen, why wasn’t it stopped, and how can we prevent it from happening again.

4. For anyone who has only read your latest novel, where is a good place in your back catalogue to start reading your other work?

Over the years at book events when readers ask the question, “What book should I buy?”, other readers have chimed up urging a them to start with Tending Roses. Even after all these years, when someone asks that question on my Facebook page, others will comment, Tending Roses.

My first novel, Tending Roses, was inspired by my grandmother, who was a survivor, a woman ahead of her time, and a wonderful storyteller. In this novel, my real grandmother’s stories are written down for her granddaughter Kate to find when she is struggling with the question of whether to return to her career after the birth of her first baby.

Grandma came to stay with us for a visit when the baby was still tiny. Together, we planted the flowerbeds around the sterile starter house my husband and I had just purchased. As we worked, Grandma talked about simple things, like how to wind the roots around an iris bulb, or how to prune the roses.

When the baby grew fussy, we had to quit working and go into the house. Grandma took the baby and settled into my rocking chair and told me to hush. Bundling my tiny son on her shoulder, she used the “grandma magic” and soon the colicky baby I could never quiet was calmly drifting off to sleep. Closing her eyes, she rocked slowly back and forth and began telling me about her life. She spoke of the rose garden she had planted as a new bride, and how it withered and grew wild when she became a young mother, her time occupied with caring for a family. As she finished the story, she looked at me through tears and said, “I can tend the roses from dawn until dusk now, but the best times of my life, the times that passed by me the most quickly, were the times when the roses grew wild.”

Something profound happened to me when my grandmother told me that story. I realised I was so focused on goals down the road that I was missing the value of where I was right then, as a young mother with a beautiful new baby. The die was cast, I dusted off my writing notebooks, stayed at home with my baby and started writing for publication.

5. Was there a book that changed your life or made you view things differently?

The Diary of Anne Frank, which I read in my early teens, was that book for me. I learned the extremes to which prejudice can go and the degree to which it can affect the victims’ lives.

As I lived in Anne’s heart and mind, I admired her tenacity and courage. I felt such empathy for her situation, and wanted Anne to live through it all and end up living a better life, but, of course, that didn’t happen. It was that experience of living in the heart and mind of another through a book that has shaped much of my life and writing.

The great thing about writing fiction is that you can bring the characters though their struggles and help them come out on the other side living better, more genuine lives. I like for my readers to end up feeling better for having read my book. And, I hope when they see that situation in real life, they’ll have more empathy for people going through their particular life storms.

I hope readers take away the message that we need not be defined by our pasts. I hope Rill’s experience resonates with readers who have in some way surrendered to the wounds of painful past experiences. Rill faces that battle as she matures. As an old woman, she advises thirty-year-old Avery: “A woman’s past need not predict her future. She can dance to new music if she chooses. Her own music. To hear it, she must only stop talking. To herself, I mean. We’re always trying to persuade ourselves of things.”

Living in a defensive posture is another form of allowing other people to dictate who we are and what we believe about ourselves. Letting go, dancing to our own music is a risk, but on the other side of that process lays light, freedom and fulfilment. That’s what I what people to take away from Before We Were Yours. Our lives have purpose, but to fulfil that purpose we must first claim ourselves.

I also hope that, in a broader sense, the story of Rill and the Foss children serves to document the lives of all the children who disappeared into Georgia Tann’s unregulated system. Only by remembering history are we reminded not to let it repeat itself. It’s important that we, ordinary people busy with the rush of every day life, remember that children are vulnerable, that on any given day, thousands of children live the uncertainty of Rill’s journey. We have to be aware. We must be kind neighbours, determined protectors, willing encouragers, wise teachers, and strong advocates, not just for the children who are ours by birth, but for all children.

As the mother of boys, my outdoor survival skill rating is unbelievably high. I’m adept at catching live grasshoppers, baiting fishhooks, building lizard traps and many other things. I’m probably the person you want to know in the event of a collapse of global infrastructure.