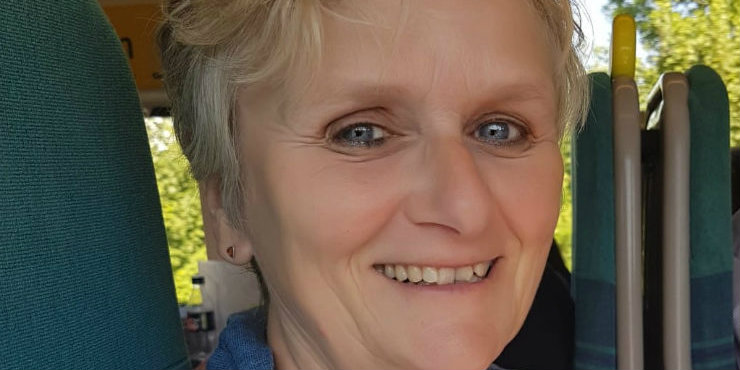 Lesley Thomson is a British crime writer born in London. Her first novel, A Kind of Vanishing, won the People’s Book Prize in 2010. Many of Lesley’s books feature the crime fighting duo Stella Darnell and Jack Harmon. The latest in the series, The Death Chamber, was published in April.

E. Nesbit’s Bastable stories and The Railway Children. Like C.S. Lewis’s Narnia chronicles, they are as vivid to me as my own memories. Joan Aitkin wrote magical books, Miss Slighcarp, the wicked governess in The Wolves of Willoughby Chase rivals Narnia’s White Witch for cold fear.

The cobbled pavements glistening in lamplight and dark River Thames in my novels owe much to Dickens and Wilkie Collins. The Woman in White scared me witless. Count Fosco (those white mice inside his waistcoat) is chilling. If you saw the TV adaptation, I recommend you borrow the book.

Barbara Vine (Ruth Rendell of course was a Suffolk resident) inspired me to become a crime writer. I learnt that the genre embraced not only whodunnits, but whydunnits; A Fatal Inversion is a fab read. Sue Grafton inspired me to write a detective series. I could go on!

2. When she is not solving crimes, Stella Darnell is a house cleaner. What made you choose cleaning as a job for her?

There’s a similarity between cleaners and detectives. Both enter messy, chaotic situations and restore order. Detectives clean up. Stella and her dad (a Metropolitan police detective who dies at the start of the first book, The Detective’s Daughter) are methodical, each has an eye for detail. Stella is determined not to follow in Terry Darnell’s footsteps, but gradually applies her cleaning skills to solving cases - stain by stain.

As a writer, a cleaning detective gave me lots of scope. Stella legitimately goes to different places. She cleans buildings in Kew Gardens, Hammersmith Police Station, a hospice and even crime scenes. She meets lots of different people.

3. Your latest book is The Death Chamber. Can you give us a flavour of what this is about?

In the last forty years two women have been murdered in the Cotswold village of Winchcombe. Cassie Baker was entombed in a Neolithic burial mound (the death chamber). Bryony Motson’s body was never found. Stella and Jack, her detective partner, are asked to investigate by Paul Mercer, ex Met colleague of Stella’s dad who was dismissed from the police for circumventing the arrest procedure. Dying of heart failure, Mercer wants to catch the killer.

The story involves a lonely country house, scarecrows that move and a beauty parlour. I didn’t say that Agatha Christie is a big influence. This murder mystery owes much to her.

4. At what point did you feel that Stella and Jack were characters you wanted to develop?

From the start I wanted to create two different detectives. One is a cleaner, the other a London Underground driver.

Stella, as I’ve said, is methodical. She faces reality head on. Jack Harmon is fanciful and intuitive. He reads car number plates like runes, sees meaning in the squashed chewing gum on pavements and believes in ghosts. (For all this, you’d love to be on Jack’s train!)

Stella is horrified by Jack’s approach to life, yet comes to appreciate his quirkiness. Jack benefits from Stella’s no-nonsense attitude. Together they solve murders.

5. Is there anything you can tell us about your current work in progress?

The Playground Murders is seventh in the Detective’s Daughter series. A woman is fatally stabbed in the house of her lover Christopher Philips, a married man. Philips is in prison for her murder, but his daughter Carrie says that he’s innocent.

The investigation leads Stella and Jack to a case that shocked the country thirty years ago. Two children were murdered in a London playground, near Wormwood Scrubs prison. Are the two cases connected?

The Playground Murders is a story of passion and betrayal. My novels explore what touches us all, love, loss, grief… I write about the impact of a crime and how it still affects loved ones years later.

When I was researching The Playground Murders, I read that the lumbering iron playground equipment of my childhood was positively dangerous. Who remembers the tilting witch’s hat, the rocking horse that bucked and those roundabouts that could crush a foot? Never mind murder, getting on a swing was risky.

I’ve just finished Agatha Christie’s They Do It with Mirrors. The Queen of Crime knows how to plot. Respect!

I’m halfway through Rex v Edith Thompson, a fascinating account of the passion between Edith Thompson and Freddy Bywaters, executed in 1923 for the murder of Edith’s husband Percy. I’m also reading a biography of the 1940s/50s pathologist Bernard Spilsbury (he gave evidence in the Bywaters-Thompson trial).

I’m enjoying Gore Vidal’s Narratives of Empire series, a great way to understand US history. I’ve started an early copy of Elly Griffiths’ The Stranger Diaries, and am gripped!

Thank you! I’m chuffed that you’re reading my novels. Not least because I’ve had some happy holidays in Suffolk (Lavenham is idyllic).

When I was a teenager I worked in Hammersmith Library shelving books. I dreamt that one day my novels would be in a library. It’s not often that dreams come true.

It’s so interesting to hear readers’ impressions of my novels. I’d love to meet you at, say a book group or an event. Thank you too for this opportunity to tell you about my own reading tastes.

I wonder how many of you know that I’m a fan of scriptwriter Amy Sherman Palladino. She wrote Gilmore Girls and The Amazing Mrs Maisel. If you haven’t seen these shows, do check them out, you’re in for a treat. I imagine living in Stars Hollow with Lorelei Gilmore and Luke Danes. The writing is funny, moving, disturbing and sad, like the best crime novels it covers the gamut of life.

When I’m stuck on a chapter, I ask Alfred, my raggle-taggle poodle, for advice. He gave me the idea for The Dog Walker, so he’s worth listening to.