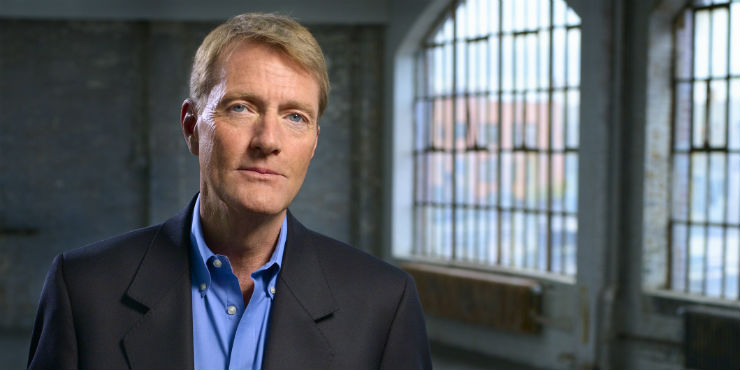 Lee Child is quite simply Suffolk Libraries’ favourite writer. Every year his books top the list for the most issues. To those who are not familiar with his work he is a British thriller writer known for the Jack Reacher book series. This follows the adventures of a former American military policeman, Jack Reacher, who wanders the United States finding trouble wherever he goes. Lee’s latest book was Make Me in 2015 and Night School is due to be published in November 2016.

The glib answer would be everything. Our local library was a Nissen hut and, as a child, I read every available book in it until my mother took pity and got me an adult library card. My first real reading obsession was Enid Blyton, book after book, series after series, and I loved ‘em all.

Many of your books like Personal and The Affair are written in the first person. Was this a conscious decision?

Absolutely. Writing in first person comes naturally for me. But writing in third person gives me more freedom to build suspense because the reader can ostensibly see around corners and anticipate events about which Reacher has no knowledge. With first person, the reader can only know what Reacher knows.

What is it about Jack Reacher that appeals to readers of all nationalities?

Reacher is meant to be an iconic character, much like Robin Hood, Gilgamesh or the American cowboy Shane. Once when my wife was studying medieval literature she gave me a serious academic book about the Robin Hood legend. Turns out there are at least three separate “true” stories, centuries apart, in England alone. Plus, almost every other culture with a literary tradition has several identical myths of their own. I think this proves that far from being historical reportage, the Robin Hood stories (and other similar archetypes) actually illustrate the basic atavistic need for humans to have this kind of consoling narrative in their lives - the outcast, the outlaw, the lonely fighter for justice. Thus, say, the Lone Ranger’s apparent similarity with, say, Sir Gawain (or, flatteringly, Reacher’s with Lancelot) is really about notions touching off a chord that’s deep in the human psyche, rather than overt literary connection. Which is to say, it’s our collective psyche that creates literature, not the other way around.

There are a lot of Aston Villa players’ names past and present in your book characters. How did that start and will be seeing the likes of Gestede and Grealish in future?

Possibly… I’ve been a diehard Aston Villa fan ever since the AV-vs-Ipswich 1961 game.

Night School is the next Reacher novel and will be published on 7 November 2016. It’s a prequel set when Reacher is still in the army. The second Jack Reacher movie is due in October 2016 and is based on Never Go Back.

I’d spend it sitting in a chair on a quiet terrace with the sun shining down and not a cloud in the sky - with a hot bottomless cup of black coffee and a book.

Do you have a message for your many Suffolk based readers?

The value of a good library cannot be underestimated. Own a library card and the world is yours to discover. Thank you for reading and supporting your local library.

Reserve books by Lee Child from our libraries.