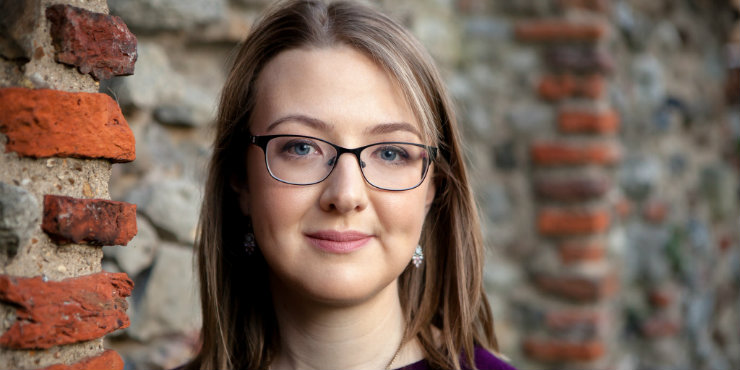 Her first novel for Raven Books, The Silent Companions, won the WHSmith Thumping Good Read Award 2018 and featured in both the Zoe Ball and Radio 2 Book Clubs. Laura’s latest book is The Corset, published this month.

Laura has previously published historical fiction novels about the Hanoverian monarchs, Queen of Bedlam (2014) and Mistress of the Court (2015).

The first book I remember really loving was Black Beauty, by Anna Sewell. I’d picked it up off my Mum’s bookshelf because I was obsessed with horses and riding at the time, but it was so much more than a ‘pony club’ read. To be honest, it’s not really for children at all! But the story has always stayed with me.

I read a fair bit of Goosebumps, Point Horror and Point Romance at the local library before moving on to the classics in my teens. Jane Austen was, and remains, a huge influence. My love of her novels was one of the main reasons I started writing. I still try to sneak in a line or reference to a Jane Austen novel or adaption in each book I write!

Also at this time I discovered the Bronte sisters and Thomas Hardy – I think they had a big impact on my emotional landscape.

2. You used to work as a bookseller. How does it feel to be on the other side of the fence?

Naturally it’s thrilling to see your own book on shelves you used to stack, but it can also be a bit bizarre! When I go to do bookshop events, I always feel like I should be helping set up etc. It feels funny to have booksellers compliment you on your work and say they are a fan while inside you are saying, ‘I’m just one of you!’.

3. A lot of readers will have discovered your work with The Silent Companions, but you had written about the Hanoverian monarchs before that. What attracted you to them rather than the Tudors, who everyone seems to write about?

You have partially answered the question – everyone writes about the Tudors! Much as I love that period of history, I feel that others miss out simply because they are not taught at schools. So much happened during the Georgian era that people should know about.

For me, the fascination began with the fact it was the period Jane Austen lived through, but I soon became deeply attached to the royal women that I researched. They were resourceful, passionate and witty in the face of some astonishing challenges.

However, in terms of sales and publishing, the period did work against me. I had plenty of rejections saying the books would not sell because they were not Roman or Tudor era.

4. The Silent Companions is a real spine chiller. What gave you the idea for the book?

It was the discovery of real life silent companions: wooden firescreens painted to resemble people. I just found them so creepy! I mentioned to my husband, who is a big Stephen King fan, that someone should write a horror story about them. He said that person should be me!

I’d never written anything scary before so it was a huge challenge. I worked out some pivotal scenes I wanted to include and started to build a story about them. Many of the chilling bits were inspired by the fear I had of a china doll in my childhood.

5. What can your readers expect with your next book, The Corset?

It’s a bit of a dark and wild ride … I’ve been told it will put your emotions through the wringer!

Teenage seamstress Ruth is on trial for murder, a crime which she claims to have committed with a needle and thread. Trying to help her is charitable prison visitor Dorothea, who believes she can tell whether a person is guilty or innocent by the shape of their skull. But the tale the prisoner has to tell, by turns horrific and darkly comic, begins to have an impact on both Dorothea’s faith and future life.

There are no ghosts in this one but plenty of human monsters. Sadly, the most horrific occurrences were inspired by real history and the terrible working conditions for Victorian needlewomen.

Simply thank you for reading! I spent so much time in my school library and read some of my favourite books there. It makes me really happy to think of people discovering my stories in a similar way.

I think I am guilty of over-sharing on my Twitter account, so readers probably know most things! I guess what you might not get from the dark nature of my books is that I am actually quite a friendly, smiley person who likes Disney and love stories.