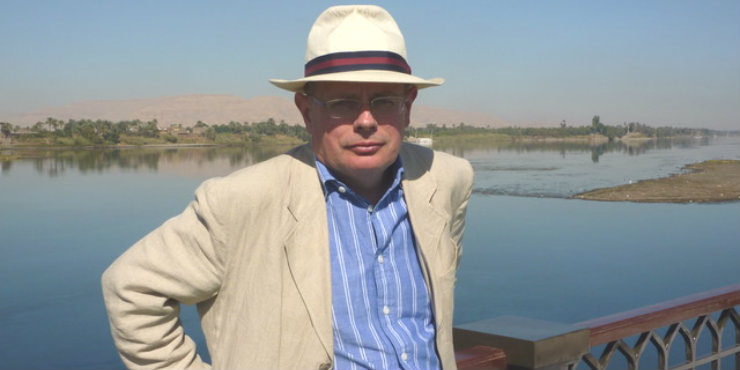 L. C. Tyler is the author of two comic crime fiction series: the John Grey Mysteries, set in the seventeenth century, and the Herring series, featuring crime writer Ethelred Tressider and his agent, Elsie Thirkettle. His latest novel is The Maltese Herring.

Since I write comic crime, it will surprise nobody that I read crime and humour when I was younger - and it will probably surprise nobody who actually knows my books that I read more humour than crime. I devoured Anthony Buckeridge’s Jennings books. Later I migrated to Jerome K. Jerome and P. G. Wodehouse - both key influences for me. Later still (the books I bought at university), Evelyn Waugh and Hunter S Thompson.

On the crime front, I read a lot of Christie and Conan Doyle, though my first crime book ever was Emile and the Detectives, by Erich Kästner (a classic everyone should read).

2. How did you get into crime writing?

By accident. Early on, I experimented with the (then fashionable) idea that plot, character etc were all very passé, and all a book needed was cleverness and attitude - thankfully that one never found a publisher. Then, living in Africa, I wrote a sort of Evelyn Waugh novel about somebody living in Africa.

It was only when (on my third attempt) that I introduced a dead body into the plot at an early stage that I was able to get a publisher to offer me a contract. Even then I hoped I’d written literary fiction that just happened to feature a murder, but (the publisher told me) it was just a crime novel, so that’s what I’ve written ever since.

3. How did Ethelred and Elsie come about and how has your relationship with them changed since we first met them in 2007 in The Herring Seller’s Apprentice?

I can no longer recall the exact moment that I decided they would be the main characters. Ethelred’s resigned, rather pessimistic tone was certainly there from the start. Then a few chapters in, Elsie suddenly burst onto the scene as co-narrator. Small, loud, brash, impatient, she is the complete opposite of Ethelred. She says all of the things, and does all the things, that I probably wouldn’t dare to in real life. It’s great fun writing both of them but, in a strange way, they sort of tell me what I should say.

I think that, over the years, they’ve aged with me. Elsie is now a much more successful agent than she was in The Herring Seller’s Apprentice - in part because she uses devious tactics to steal other agents’ authors. I also noticed that, although her sarcasm is as great as ever, she swears less than she did - it was never anything too shocking, but readers never told me that it would be better if she swore more than she did.

Ethelred has changed less because nothing’s ever happened to him to turn him into an optimist. Occasionally it looks as if he will find love, but Elsie is always on hand to explain to him why the lady concerned is unsuitable. He’s older than Elsie, but writers never really retire, so they’ve hopefully they’ve both got another book or two in them.

Strangely, yes, it is. When I wrote the first book I still had no idea what name I would write under. Deciding to write as L. C. Tyler (my real name) was a last minute decision made when they were finalising the cover. So, the pun wouldn’t have worked if I’d gone for a pen name as originally intended.

Ironically, I’d made it all the way through school as L. C. Tyler without gaining the nickname ‘Elsie’, but now I frequently find myself addressed (affectionately, I think) as ‘L. C.’. So, maybe a bad call, but I’m stuck with it now.

5. Your latest book is The Maltese Herring. Can you tell us a little bit about it and what it was like to write?

It’s book eight in the series. Ethelred finds himself cornered at a dinner at his old college and bounced into assisting one of the college fellows into some research into a missing hoard of treasure, lost at the time of the dissolution of the monasteries. Ethelred’s role is to ease Dr Joyner’s way in getting permission to excavate in the garden of a large house close to where Ethelred lives. (Ethelred has inadvisedly revealed he knows the owner quite well.) But no sooner has Joyner gained access to the site than he is found dead at the bottom of a well. An accident or murder? And, if murder, who wanted to stop him digging and why?

There are, it goes without saying, plenty of suspects who are worried about the long-hidden secrets Joyner might have uncovered as he investigated. But Joyner was not the first person to look for the treasure. The Reverend Sabine Barclay Wood had hunted for it a hundred years before and possibly found it. If he did, then it brought him no luck at all. Indeed, according to local legends the most important item in the hoard - the Maltese Madonna - is cursed and has been the downfall of each of its past owners.

Ethelred is not sure that he wants to discover who killed Joyner and to find the Madonna, but Elsie reckons it’s probably worth the risk…

Like all writers I know, I grew up using my local library. At a time when I didn’t own many books myself, I had thousands to choose from, to enjoy, to discover what I liked reading. We need to support and treasure our libraries.

7. Can you share one thing about yourself that your readers may not know?

I can recite the names of all of the kings and queens of England, in the right order, with dates. I am, however, still waiting for anybody to ask me to actually do it.