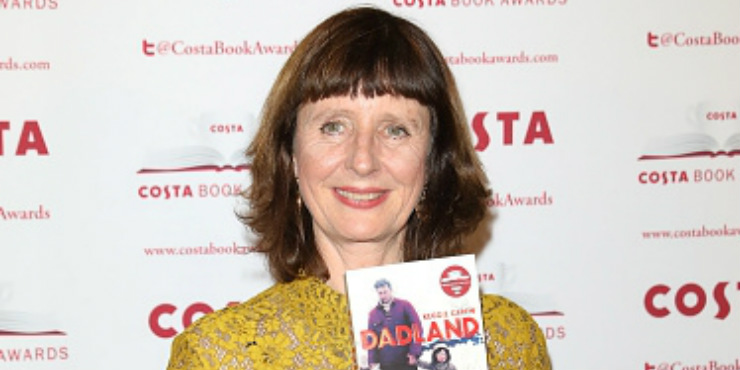 Keggie Carew was born in Gibraltar. Before writing, she worked as a mixed-media artist with exhibitions in Ireland, New Zealand and the UK.

When her father was 86, Keggie found a note in his pocket reading: “My name is Tom Carew, but I have forgotten yours.” It confirmed her worst fears that her father had dementia. This led to a ten-year journey to piece together his history before it was too late.

As her father’s memory failed him, the first-time author set about scouring personal archives, military museums and her father’s own sometimes muddled recollections to uncover a family history, committing the highs and lows to paper in a part detective story, part memoir. Dadland is a story that has resonated with many people and it became a word of mouth success, not least in Suffolk Libraries where it has never stopped issuing since we bought it. If you have not read it yet I would strongly advise you to. It is an extraordinary read. This was recognised when Keggie won the Costa biography prize for 2016.

As I child I would obsess about anything with animals or fairies. Mum read us Pooh, Wind in the Willows, and Rudyard Kipling. I loved narrative poetry, and learnt The Ancient Mariner off by heart.

Dad gave me The Story of San Michele by Axel Munthe when I was 18 - which I write about in Dadland. Later it was Tolstoy - for his interwoven historical and emotional landscapes - just wow. Then it was Michael Ondaatje, whose voice I liked hearing in my head, he has been a great teacher for me in the opening of possibility - I’m thinking particularly of his The Collected Works of Billy the Kid, a collage-poem-narrative where Ondaatje gets behind Billy’s eyes and under his skin. To this I would add George Orwell and obscure gems like Sheila Stewart’s Lifting the Latch.

2. What was it like writing Dadland? As a reader I found it funny and emotional and very moving.

To discover things about your father that were so much more than you had ever imagined (and that from someone who knew what a wild card he was), it was jaw dropping. And I loved the detective element, unearthing one thing that led to another. Like the 1945 film of him coming out of the Burmese jungle in a sarong at 25 years old with a beard and dagger on his hip, and a very mischievous look on his face.

There was a gift horse (an Irish gift horse, Dad would say) showering me with the most incredible events that would never survive in fiction, and the stories kept on coming - all through Dad’s life. Anyone passing my writing shed would have heard loud laughter coming out quite regularly. I still read passages and burst out laughing with the memory of some mad episode.

3. Did the fact that you did not come from a writing background help or hinder as you wrote it?

For the unconventional nature of Dadland - its structure, the personal episodes, and stitching it together in the way I have - I think it helped, because I was able to follow my instinct without too many restraints. This is also how I work as an artist. I had a very clear picture of what I wanted in my head when I began, but it took some balancing to get it right, and a lot landed in the bin.

I wanted Dadland to do lots of different things at the same time. I wanted it to be accessible and funny but also serious and deep. The area that tested me was putting Dad’s exploits in the context of history. I had to consume a mountain of files, documents and history books, digest, understand, then distil what I needed and get it into my voice.

But I think wherever you come from, you still have to do your time, and I certainly did that. What did Malcolm Gladwell reckon … 10,000 hours practice before you are good at anything?

4. How did it feel when you finished writing the book?

I cried. I did. It was a massive journey, not just through Dad’s life and such incredible moments in 20th century history, but through my whole life too. It represented so much. It was everything, and I knew it was the most important work I had ever done. I had put everything into it. It was utterly, utterly draining, but at the same time I was immensely proud of it. And after scrutinising a life so minutely there was also a feeling of acceptance - of this challenging, charismatic father and everything that happened to us. The wheel turns round and it is never going to be roses all the way. But by digging deep, there your answers lie.

I also had no idea, after all that, if anyone would be interested. Only my husband had read it, so when people I didn’t know began to respond well to it, and when so many publishers were interested in it, I was frankly overwhelmed. It was scary when I knew that it would be going out into the world. And sad not to have been able to share it with Dad, but it has been very bonding with my brothers and sister, who have been immensely supportive.

5. What is your latest project?

Ah. I’m not superstitious, but … I have something on my desk but I think I am going to wait until I think it’s good enough before I talk about it.

There is so much in Dadland about humanity, warts and all, and I hope that resonates for readers in a universal way. About living with a loved but infuriating parent. About fury, failure, courage, jealousy, madness, memory, loss … and of course love. And that this might be comforting in some way. Or that they feel they are less alone. That is why I am a reader.

7. What is the best piece of advice you were ever given?

Dad’s advice: If you have a choice always take the most difficult option, because that’s what you really want to do - why would you have included it otherwise?