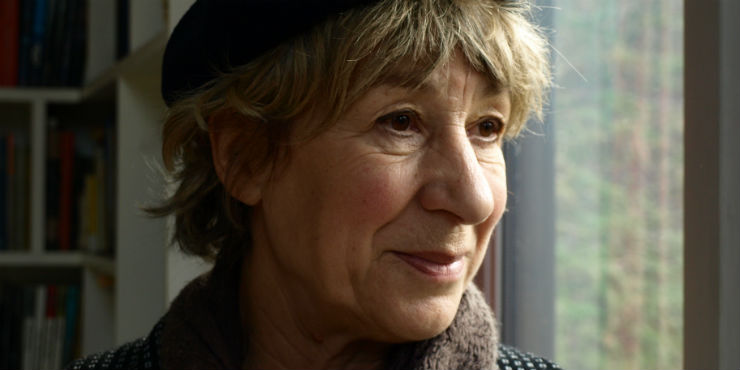 Julia recently took time out from writing her latest book to answer some questions for us.

Threads was a massive word of mouth success in Suffolk Libraries. As I check now it is still issuing well. What drew you to the story of John Craske?

I decided to write about John Craske, after a friend of mine mentioned him and how good his work was and how he’d been almost forgotten. I went to the Glanford Shell Museum where they have a beautiful long tapestry pinned on a high wall in full view of the daylight and then to Snape which has a big collection of paintings and embroideries, but none of them on show and I think that was when I decided I wanted to fight his corner. He was a poor fisherman from Sheringham on the North Norfolk coast, an area which I know and love. He moved inland and helped with the family fish shop, but became a chronic invalid being cared for by his devoted wife. When he was in his mid 30s he started to paint the sea and boats on the sea and then later he began the embroideries which he could do while lying in bed. I felt he was an artist in the truest sense and his art gave him a voice as it were, enabling him to find quiet and a certain wisdom in an otherwise impossible situation. The fact of there being so little known about him, made it into an interesting challenge; a biography without much biographical material. I realised I was free to allow my book to drift in any direction and so it became the story of the people I met or heard about as I was doing my rather haphazard researches and then bit by bit my own story became part of it as well, one of the many threads.

You have written in a variety of formats. Which one do you feel most comfortable in?

Writing for me has always been an exploration. I have done a wide range of subjects and formats but I think all my books have been a way of understanding myself through understanding other people and the predicaments they are faced with. I have never felt tied to a particular form and each new book has taken the shape that seemed to suit it best. With Threads I enjoyed the fact that the pictures were made as important as the text; there are a lot of things that can be better said with images, rather than with words.

You have written about some fascinating people, many of whom had life changing experiences. Is there anyone you would still like to write about?

It’s true that I have written about all sorts of very different people in very different situations – Napoleon dying on St Helena; Goya finding himself deaf; Billie Holiday trying to survive in the racist world of America in the 1940s and 50s… The list goes on, but I have no idea in advance of what other lives I might want to explore. In Threads and in my previous book Thin Paths, I really enjoyed talking to people and simply looking at the world around them and that fascination is part of what I am working on now. It will be a book without a main character, which is a new departure.

Is there any news of Angels Dancing On A Pin?

Angels on a Pin is half done, but I keep getting distracted by other plans, so I am not sure when it will be ready. I have written a poem for it which begins:

I’ve always been a writing woman

Who uses words as best she can

To jump from fire to frying pan

From frying pan to pastures green

With intermezzos in between

While chasing all the words that spin

A perfect day? Walking along the coast here, or in the mountains of Northern Italy where I still have a little house, with a good companion, not too much talk, a bit of sunshine and a few brief encounters with birds and animals, the landscape and the weather, alongside maybe one or two fellow human beings on the way.

Reserve Threads: The Delicate Life of John Craske by Julia Blackburn from our catalogue.