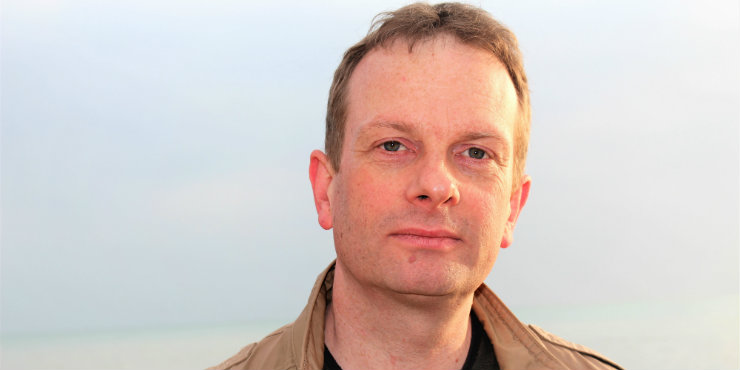 John Higgs is an English writer, novelist, journalist and cultural historian. He has published novels, biographies and works of cultural history. His latest work is William Blake Now: why he matters more than ever, an essay on how, nearly 200 years after his death, the poet and painter’s work still influences media and culture as diverse as video games, novels, sporting events, political rallies, horror films and designer fashion.

You can see John in person at Lavenham Literary Festival in November. The Festival is sponsored by Mattioli Woods Wealth Management.

As the late, great Terrance Dicks died recently I’ll have to give him full credit for giving me a love of books, when I was about seven or eight. Dicks is best known for his Doctor Who novelisations, and is rightly credited with getting a generation of children in the 1970s and 1980s to read, especially boys. He wasn’t someone who the literary world particularly celebrates but his brilliance was the clarity and momentum of his prose, and he was a natural storyteller. You can’t argue with Terrance Dicks’ values.

2. You published The Future Starts Here earlier this year. Can you tell us something about it?

The Future Starts Here is about the 21st century, the changes we are living through and where we are going. It dismantles a lot of common assumptions that Hollywood movies insist on, and it factors in the remarkable generational shift that’s occurred between the Millennials and Generation Z, who are today’s teenagers. The result is a picture of the coming years that is considerably more positive than you might expect.

3. The Future Starts Here goes against current thinking by taking a rather more positive view of the future than is fashionable. Do you think human nature can change and improve things for all?

Yes it can, and it does. As Theodore Parker said, the arc of the moral universe is long, but it bends towards justice. What’s unusual about our time is that, since about the 1980s, we’ve been in denial about this. The thing that’s rarely mentioned about the huge problems we face – such as climate change, inequality and biodiversity collapse - is that we do know how to solve those things, it’s just that we don’t believe we will.

But when you talk to Generation Z, you realise that the generation coming up don’t share that blind spot, and they are prepared to do what is needed. As a result, you get things like the school climate strikes or the sudden rise in vegan food, which you would never have got with the Millennial generation. How they see the world is fascinating, and it is their values that will shape the 21st century and beyond.

4. What was the last book you read that made a real impression on you, and why?

I’ve just finished Dreaming The Beatles by Rob Sheffield, which was terrific. Just as The Beatles grow in stature with every passing year, so books about them keep changing and giving us new perspectives. Dreaming The Beatles is mainly about the love people feel for them, which is absolutely one of the most important parts of their legacy.

5. Who is the most interesting person you have interviewed?

I’m lucky that I’ve interviewed a number of my heroes, such as the writer Alan Moore and the great American agnostic Robert Anton Wilson. But I also very much enjoyed talking to John Constable (aka John Crow) for my book Watling Street. John is the London poet who has spearheaded the campaign to save what is now the Cross Bones Garden of Remembrance from developers.

Cross Bones was a medieval burial ground initially used by the ‘Winchester Geese’, who were prostitutes operating under license from the Bishop of Winchester but who were not deemed worthy of being buried in consecrated ground. Cross Bones then became a paupers’ burial ground which was in use for centuries. What I learnt from John is to engage with history from a compassionate and humane perspective, and not a triumphal one.

6. You are one of the speakers at the Lavenham Literary Festival. Can you give us a small taste of what to expect?

Lavenham is a lovely festival with a really nice, engaged audience, and I’m looking forward to going back. I think people can expect me to try to stay on topic and discuss the future, as I’m booked to do. But I will be fighting a losing battle in terms of not going off-topic and talking about William Blake instead. This is a side effect of writing about Blake – as it appears to me now, there’s hardly any subject that wouldn’t be improved by a reference to Blake. Fortunately, my family are very tolerant and understanding about this problem I have.

They may not know that I used to make pre-school animation. I directed over a hundred episodes of extremely cheap and quite mad cartoons, mainly for Channel 5. Somebody had to!